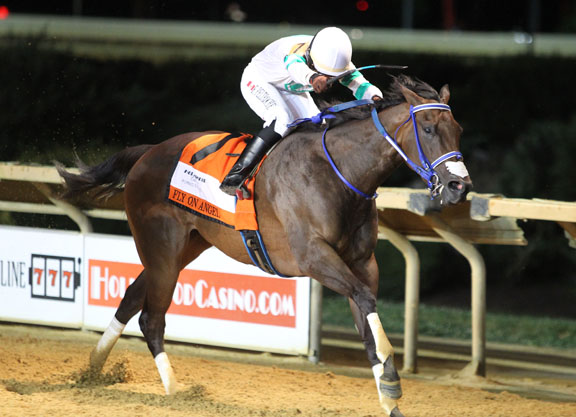 Fly On Angel (Palace Malice) (hip 280), winner of the Aug. 28 GIII Charles Town Oaks, topped Tuesday's Fasig-Tipton Midlantic December Mixed Sale when bringing a final bid of $195,000 from Cypress Creek, LLC. The 3-year-old filly was consigned by Northview Stallion Station on behalf of Joseph Besecker, who had claimed her for $50,000 out of a winning effort at Parx Aug. 10.

“I had followed this horse for a while after Clovis Crane consigned her and he had tried to get me to buy her as a baby, but I just wasn't a Palace Malice fan,” Besecker recalled. “When she ran and she was doing well, I claimed her because I kind of always regretted not getting her. [Trainer] Claudio [Gonzalez] did a tremendous job with her.”

Fly On Angel's next start following the claim was the Charles Town Oaks where she was a front-running half-length winner.

“My mom died Aug. 4 and we had a memorial service the night of the Charles Town Oaks,” Besecker said. “I was with Clovis and he said, 'We have three minutes to post.' I had almost forgotten with everything that was going on, but I think my mom got her across the line. She went the fastest quarter and half in Charles Town history. She was flying like an angel. It was pretty emotional. And tonight was emotional, too. But I had to put a business mind to it and I think her value could not have been too much higher. We might have reduced her value a little bit with her last race where she had some issues.”

Following her win at Charles Town, Fly On Angel finished sixth in the Oct. 3 GIII Miss Preakness S. and was most recently seventh in the Nov. 28 Safely Kept S. She is out of the stakes-placed mare Runge (Posse).

Besecker's dispersal of the majority of his stock dominated last year's Midlantic December sale, with the auction's top three lots, led by the $450,000 Laddie Liam (Golden Lad), all from the dispersal. Through the Northview Stallion Station consignment, Besecker sold 17 horses Tuesday for $475,000. The prolific Pennsylvania-based owner also signed for four lots during the auction.

“Just like a lot of sales lately, there were ebbs and flows,” Besecker said of the market at the Midlantic sale. “Early on, I think I bought a couple because they were just giving them away. Then it got a little strong and then there were some things that peppered it up. And then when it got to some of the racing horses, they went for much better than I would have thought. So there were peaks and valleys and I tried to take advantage of the valleys”

A weanling colt by hot freshman sire Laoban brought the second highest price of Tuesday's auction when bringing a final bid of $150,000 from Carrie Brogden of Machmer Hall. Bred in New York by Team Millennium Stable and consigned by Vinery Sales, the bay colt (hip 182) is out of Dixie Gem (Stonesider).

“He's a proper horse by a proper stallion, the only thing he doesn't have is a proper pedigree,” Brogden said of the colt who was purchased as a pinhooking prospect. “He's out of a young mare, but once again that's the type of mare that Laoban has been making it on. He's a registered New York-bred who vetted well.”

Laoban (Uncle Mo), who will relocate to WinStar Farm in Kentucky for the 2021 breeding season after beginning his stallion career at Sequel New York, has already been represented by Grade I winner Simply Ravishing and graded winner Keepmeinmind.

“They are all correct. He is throwing correct Uncle Mos,” Brogden said of offspring of the stallion. “And obviously they are running and they are running no matter who the mare is. That is an attribute of a superstar sire. I think you are witnessing the same thing happening with Constitution, too.”

Brogden saw Laoban for the first time last week and she was impressed with what she saw.

“I thought this weanling was as good-looking as his father,” she said. “I just saw his father for the first time last week. If I had realized how good-looking he was, I would have booked mares to him. I unfortunately missed the boat there, but I did buy pieces of three yearlings by him to go to the 2-year-old sales.”

Brogden said she had seen a solid middle market at the Midlantic sale.

The Maryland auction house is advantageously located at the juxtaposition of several racing jurisdictions and Brogden agreed the geography could help the sale attract a stronger middle-market buying bench.

“I think you have a lot of trainers and a lot of people who support their own state-bred programs,” Brogden said. “A Virginia-bred or a New York-bred or a Maryland-bred. I saw Jeff Runco bought a really nice West Virginia-bred [hip 148, a filly by Gormley who sold for $30,000], well he is keyed into that program. These horses all have their own market.”