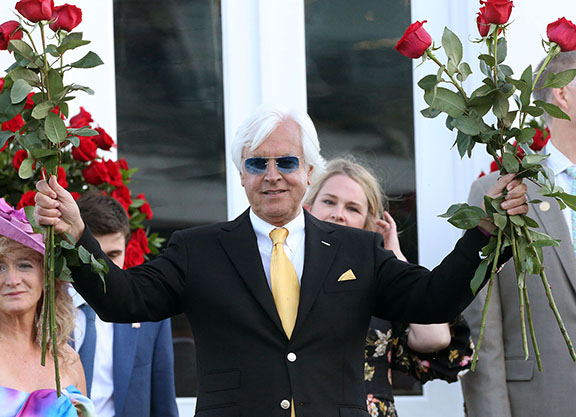 Both plaintiff Bob Baffert and defendant the New York Racing Association (NYRA) traded volleys of legal filings that were posted electronically just before 6 p.m. Tuesday. They all relate to Baffert's ongoing quest to fight NYRA's attempts to either banish him outright or to give him a hearing that would adjudicate the “detrimental conduct” charges NYRA has levied against Baffert over the repeated equine drug positives in his trainees.

NYRA on Oct. 12 filed a memorandum of law in support of its earlier motion to dismiss Counts I, III, IV and V of Baffert's federal lawsuit against NYRA. That civil complaint was initiated when NYRA tried to exclude Baffert from racing or stabling at its three tracks without any hearing process back on May 17.

“NYRA moves to dismiss all counts except Plaintiff's [civil action for deprivation of rights] claim. Counts I, III, IV and V of the Complaint fail to meet the applicable pleading requirements and, as such, should be dismissed as a matter of law,” NYRA stated in its filing in United States District Court (Eastern District of New York).

The filing continued: “First, this Court should dismiss Plaintiff's tortious interference with business relations claim because Plaintiff fails to allege either that NYRA directed conduct at any entity or individual other than himself or any specific business relationships with which NYRA purposefully interfered.

“Second, under the New York Court of Appeals' decision in Saumell v. New York Racing Association, Inc., Plaintiff's claim alleging a violation of New York law fails because NYRA acted upon its common law right of exclusion in suspending Plaintiff and because NYRA is not bound by the New York State Gaming Commission's hearing procedures when excluding a licensee from the Racetracks.

Baffert's legal team rebutted those points in its own Oct. 12 filing, then launched into a separate argument about the exclusion hearing process that NYRA created to give Baffert a chance to present his own evidence and dispute the reasons that NYRA wants to bar him (Baffert is currently allowed to race at NYRA tracks because a judge ruled in his favor with a July 14 preliminary injunction).

“Rather than accepting this Court's Order and its defeat, NYRA has chosen to double down,” Baffert's filing contended.

“First, NYRA has filed the current meritless Motion to Dismiss. Second, NYRA sent Baffert another letter Sept. 10, 2021, which claimed that NYRA intended to once again suspend Baffert for the exact same conduct that it previously attempted to suspend him.”

Baffert's filing continued: “In an effort to circumvent this Court's injunction Order, NYRA claims its latest attempt to suspend is “new.” In reality, there is nothing “new” about it as it is based on the same conduct and reasoning. The only thing different is that NYRA has now created 'Hearing Rules and Procedures' out of whole cloth in attempt to retroactively instill legitimacy to its blatantly unlawful actions.

“These rules and procedures state that NYRA can appoint its own hearing officer, render whatever decision it deems appropriate, and deny Baffert any right to appeal. In other words, in response to this Court's ruling that it acted unlawfully, NYRA has decided to engage in even more unlawful activity. NYRA's recent actions make it highly likely that Baffert will suffer additional injuries to his business and reputation,” Baffert's filing stated.

NYRA wasn't through yet with the legal filings on Tuesday. In its response to Baffert's response, it fired back with another memorandum, this one in “further” support of its own motion to dismiss.

NYRA's second filing on Tuesday urged the court to “reject” Baffert's “novel” theory about tortious interference. It also stated that Baffert “mischaracterizes New York law” and that his argument “ignored the weight of authority” with regard to injunctive and declaratory relief.”