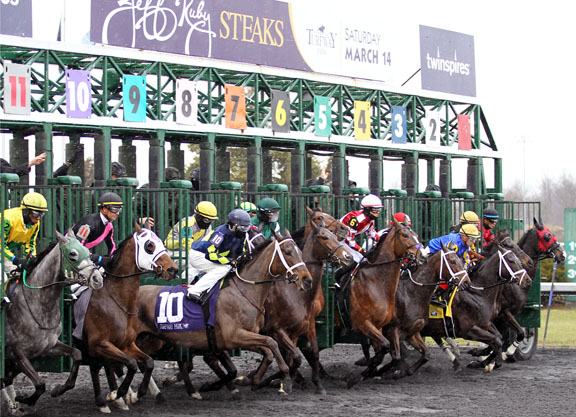 Floroplus (City Zip), a Turfway Park-based gelding who won three straight races in March, has been disqualified for the second of those victories after post-race testing revealed a 3-hydroxylidocaine (lidocaine) positive.

The Kentucky Horse Racing Commission has voided the win and redistributed purse money for the Mar. 18 victory by Floroplus in an $18,000 claiming sprint. Trainer Kim Hammond has been penalized with a $500 fine and a 30-day suspension, 15 days of which will be stayed because of “mitigating circumstances (number of violations in relation to overall record).”

The stay is also conditional on Hammond not incurring a Penalty Category A or B medication violation in any jurisdiction within a year of the Apr. 5 ruling.

Lidocaine, a local anesthetic, is classified as a Class 2, Penalty Category B substance on the Controlled Therapeutic Medication Schedule compiled by the Association of Racing Commissioners International (ARCI). For a first offense, the ARCI's recommended Category B penalties are a “minimum one-year suspension absent mitigating circumstances [and a] minimum fine of $10,000 or 10% of total purse (greater of the two) absent mitigating circumstances.”

According to the ruling, both Hammond and Kevin Brown (who owns Floroplus under the stable name Small Town Paddock), waived rights to formal stewards' hearings.

Small Town Paddock won six of nine races, second in the standings at Turfway's 2021 winter/spring meet, and Hammond won four of 10 starts during that time. Her suspension runs Apr. 6-20.

Floroplus, a 7-year-old, has won nine of 22 lifetime starts.