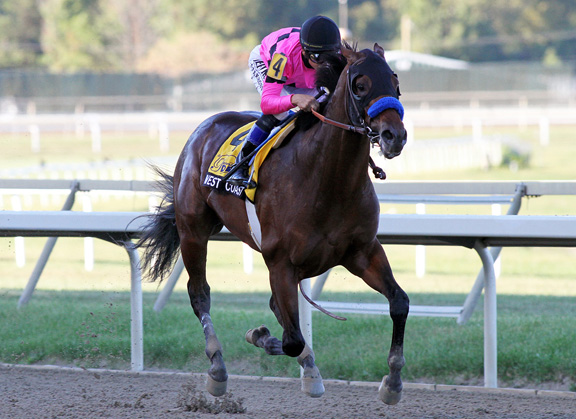 Gary and Mary West's streaking West Coast (Flatter) continued his case for champion 3-year-old honors with another dominating score as the 4-5 favorite in Saturday's newly upgraded GI Pennsylvania Derby at Parx. The runaway GI Travers S. hero was hustled away from the stalls and kept longshot pacesetter Outplay (Bernardini) company through fractions of :23.20 and :47.24. West Coast swatted that one away on the turn for home and the race was pretty much over from there. West Coast increased his advantage in the stretch and had 7 1/4 lengths over Irap (Tiznow) on the wire.

It was another length back to Giuseppe the Great (Lookin At Lucky) in third.

Hall of Famer Bob Baffert parlayed a win in this race with Bayern (Offlee Wild) to GI Breeders' Cup Classic glory in 2014. “This horse is just getting better and better,” Baffert said. “We thought he would run a big race, and he was calm in the paddock. He is just a big boy. It was nice the way he ran. He did it pretty easily.”

“I felt real good on the first turn,” Baffert continued. “Mike [Smith] had him in a good position and kept him on the outside. I told him don't go near the rail. At the 3/8ths pole, he had a lot of horse and I was afraid he was going to get a little bored out there. He's just learning how to run and to have a 3-year-old this time of year and the way he won the Travers and now winning this race, he is going to be horse to reckon with.”

The race was marred when runner-up Irap was vanned off after fracturing his left front sesamoid. A post on Doug O'Neill Racing Stable's Facebook page read, “Irap is resting comfortably in his stall. Irap sustained a fractured sesamoid. He is scheduled for surgery Monday morning at New Bolton with world renowned surgeon Dr. Dean Richardson, who operated on Barbaro. Attending will be our own Dr. Ryan Carpenter who will be flying out to assist. Please continue to keep Irap in your prayers.”

West Coast is out of champion Caressing, who took home top juvenile filly honors in 2000 after a victory in that term's GI Breeders' Cup Juvenile Fillies. She also won the 2001 GI La Troienne S. and retired in the summer of 2002 with just shy of a $1 million in earnings. The 19-year-old mare, a $180,000 KEESEP yearling purchase in 1999 by Mike Ryan, agent, was not bred back after producing West Coast and failed to get in foal to Bodemeister the following season, but produced a Carpe Diem colt Feb. 18 of this year. Caressing is also responsible for GSP Juan and Bina (Indian Charlie) and Gold Hawk (Empire Maker).