Flashback Filly Gets Up in Juvenile Fillies 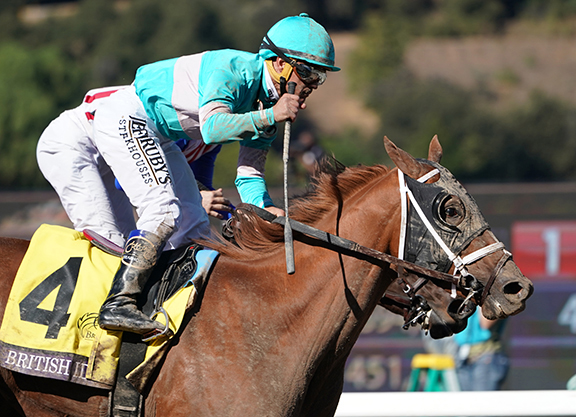 ARCADIA, CA – In a race that didn't deserve a loser, British Idiom (Flashback) slugged her way past the ultra-game 'TDN Rising Star' Donna Veloce (Uncle Mo) by a determined neck to remain unbeaten in dramatic fashion in the GI Breeders' Cup Juvenile Fillies. It was another 1 3/4 lengths back to two-time Grade I victress Bast (Uncle Mo) in third.

“She's a really good filly and this was a great race,” Cox said. “We were fortunate to come out on top. Javier [Castellano] did a great job. I'm not so sure she liked the racetrack. It looked like she was struggling a bit to me down the backside. She was ready to go today. She's been touting us the last few weeks and I'm very proud of her.”

British Idiom, a last out jaw-dropping winner while making her two-turn debut in the GI Darley Alcibiades S. at Keeneland Oct. 4, was ridden along from the stalls by Castellano and caught some trouble checking on the first turn. The 5-2 second choice found herself in a ground-saving, seventh through a sharp opening quarter in :22.71.

British Idiom crept up to fourth while under a ride entering the far turn, but appeared to have her work cut out for as favored Donna Veloce, a stunning debut winner sprinting in her lone start at Santa Anita Sept. 28, ranged up with a menacing, three-wide sweep under a motionless Flavien Prat.

Donna Veloce kicked for home in complete command, but British Idiom never quit, and kept on coming in the stretch once switching to her right lead to grind out the narrow victory.

“It was pretty rough in the first turn,” Castellano said of British Idiom's trip. “We bounced around a little bit. That was not the idea. The idea was a clear trip and stalking a little bit early. Unfortunately, that's the way it developed into the first turn. I took it from there and was very patient and confident because I had the best horse in the race. That's what she proved in the last part of the running. She kept running in a nice way and she finished really well.”

“She ran terrific,” trainer Simon Callaghan said. “You can't ask for much more. She didn't win, but she ran a courageous race and that's all you can ask.”

As for what's next for British Idiom, Cox said, “We'll talk it over with the team. I mean, obviously, the Fair Grounds has produced a lot of Kentucky Oaks winners the last few years, and it's a great surface. I think it will be a similar campaign to what we did with Monomoy Girl, but once again we'll talk it over with the group and put a game plan together and she will get a chance to relax a little bit after this for sure.”

British Idiom, a $40,000 FTKOCT yearling selection by bloodstock agent Liz Crow of Monomoy Girl fame, became the first stakes winner for Flashback after her aforementioned score in the Alcibiades. Flashback stood initially at Hill 'n' Dale before being relocated to Diamond B Farm in Pennsylvania. A $21,000 in utero purchase out of the 2017 Keeneland January sale, British Idiom is out of Rose and Shine, winner of the 2013 Princess Elizabeth S. over the Woodbine all-weather. British Idiom is a half-sister to a Cairo Prince colt that made $70,000 at Keeneland September this year and a filly foal by Jimmy Creed. Rose and Shine was most recently bred to Speightster.