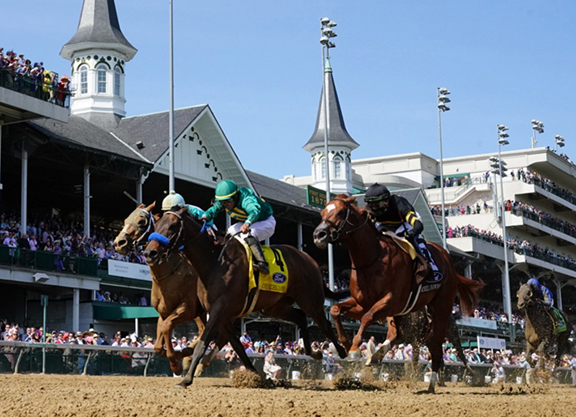 LOUISVILLE, KY – Flagstaff (Speightstown) kicked on gamely in a wild, blanket finish to lead home a one-two for his leading sire in the GI Churchill Downs S. Saturday. It was a head back to Lexitonian (Speightstown) in second; and another nose to champion sprinter Whitmore (Pleasantly Perfect) in third.

Flagstaff, a last out winner of Keeneland's GIII Commonwealth S. Apr. 3, his first win in 13 months, vied for early command along the inside in a five-horse scramble, headed by Bango (Congrats), but began to drop back to fifth following a sharp quarter in :21.97 and half mile in :44.21.

The Lane's End Racing and Hronis Racing colorbearer dialed it back up approaching the quarter pole once guided to the outside by Luis Saez with a six-wide blitz.

Bango proved a stubborn foe and held the call into the final eighth of a mile, but the others were about to swoop in. No fewer than six in with a chance and Whitmore looking like he was doing the best work of all, Flagstaff wanted it just a little more and eked out a narrow decision.

“Getting settled off the pace was the key; they were going pretty fast up front,” Saez said. “I tried to save ground into the turn and when there was a moment to go out, I had that good spot, he came for me. I know Whitmore is a good horse, but my horse really dug in. When I saw everybody coming past me, I thought it was over, but he never gave up and finally he gave me the last little bit and we got there. John told me to ride him with confidence, and that he likes to fight, and we broke and then you saw that at the end.”

Flagstaff kicked off his 7-year-old campaign with a pair of efforts at Oaklawn, finishing fourth in the slop in the King Cotton S. Feb. 6 and third in the Hot Springs S. Mar. 13, prior to his aforementioned 9-5 score in Lexington.

Flagstaff is the 21st Grade I winner for leading sire Speightstown. He is one of 60 graded winners and 122 black-type scorers for his sire.

He is the 31st Grade I winner (one of 110 graded victors and 235 black-type winners) out of a daughter of the legendary A.P. Indy.

Flagstaff is a half-brother to champion juvenile and Lane's End stallion Game Winner (Candy Ride {Arg}). Their unraced dam Indyan Giving is a daughter of champion Fleet Indian (Indian Charlie), who was acquired by Summer Wind Farm after she RNA'd for $3.9 million at the 2007 Keeneland November Sale.

Flagstaff was Indyan Giving's first foal. She was bred to Empire Maker after delivering the aforementioned Eclipse winner, but died due to complications following colic surgery before she could produce that foal.