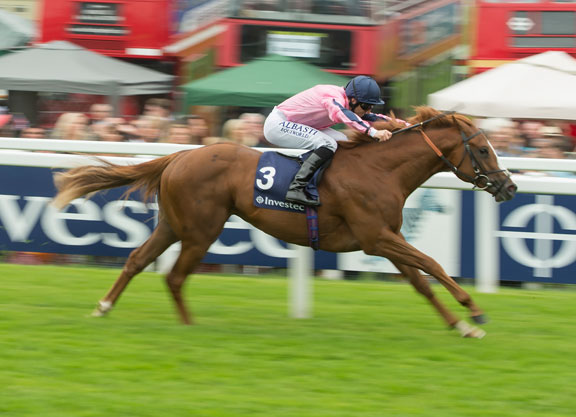 Legendary Lunch, who became the second winner for Dragon Pulse (Ire) (Kyllachy {GB}) going a shade over five panels at Windsor on debut Apr. 25, was turned over as the 1-5 chalk when falling a half length short of Sea of Snow over the same Berkshire strip in his only other go last time May 16, and claimed a first stakes win for his freshman sire by a diminishing margin in this black-type bow. The chestnut was a shade keen under attempted restraint and scraped paint along the fence in a share of third descending to Tattenham Corner. Quickening to the fore for mild nudging as an open seam was presented approaching the two pole, he enjoyed a commanding buffer entering the final eighth, but came under a late drive to hold on by a pixel as Danielsflyer flashed home strongly. “We gave him a piece of work on Tuesday and he worked better than ever so we thought we'd come here,” revealed trainer Richard Hannon. “I loved the way he travelled, but Pat [Dobbs] admitted he probably got there a bit too soon, which I don't think he could help. We've always liked him a lot, but he didn't scope very well after his last run. We've always thought he was a Royal Ascot type, but I don't know if that will come too soon. It was like having two winners as I thought he was beaten [in the photo-finish].” As for future targets, Hannon announced, “We'll enter him for the [June 16 G2] Norfolk and [June 14 G2] Coventry [at Royal Ascot], but we could wait for the [July 7 G2] July S. [at Newmarket]. We'll also look at the [June 25 G2] Railway S. at the Curragh.” Legendary Lunch, who has a year-younger full-brother, is a half to the dual stakes-placed Middleham (Ire) (Best of the Bests {Ire}) and his second damis a winning half-sister to MGISW Tejano (Caro {Ire}), from a family which includes US champions Bimelech and Black Helen. Click for the Racing Post result. Video, sponsored by Fasig-Tipton.