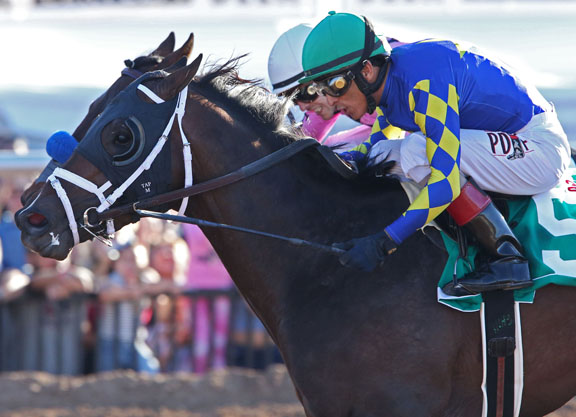 Cutting Humor bounced back from a seventh-place finish as the favorite in the GIII Southwest S. to annex this lucrative GI Kentucky Derby prep in track record time. Well supported at the windows again–especially late–the $400,000 Fasig-Tipton Saratoga grad was parked out in the clear early by Hall of Famer John Velazquez as favored Bob Baffert trainee Mucho Gusto showed the way with local hope Hustle Up (Abstraction) applying pressure and El Camino Real Derby hero Anothertwistafate in the pocket spot. Cutting Humor looked to have Mucho Gusto's number as he ranged up ominously heading for home after six panels in 1:09.63, and while the chalk briefly fought back, Cutting Humor had too much in the tank and appeared en route to a convincing success. Anothertwistafate finally got going in midstretch, however, and nearly ran down Cutting Humor for all the money late.

“Once I got to the quarter pole, I thought he was going pretty easy, but then as soon as he found himself on the lead he started waiting and idling pretty badly. I was thinking, 'Come on, buddy, you've got to get your mind back on running,'” Velazquez said. “When we got to the eighth pole, I switched to left-handed [encouragement] and he responded right away. When he felt the other horse, he kind of went about his business again.”

Cutting Humor was second in his sprint debut in the Belmont slop Sept. 9, and settled for third in a salty Keeneland route Oct. 7 behind subsequent GII Kentucky Jockey Club S. runner-up Plus Que Parfait (Point of Entry) and eventual GII Fasig-Tipton Holy Bull S. upsetter Harvey Wallbanger (Congrats). He broke through at a mile at Gulfstream Park West Nov. 17, and resurfaced to be second behind GII Xpressbet Fountain of Youth S. runner-up Bourbon War (Tapit) in a Gulfstream optional claimer Jan. 18. Cutting Humor blew the first turn and made a middle move in the GIII Southwest, and was looking to become the third also-ran from that heat to come back to score. Third finisher Long Range Toddy (Take Charge Indy) took a division of the GII Rebel S. last weekend, while pacesetter Gray Attempt (Graydar) cut back to annex Oaklawn's Gazebo S. Saturday. Runner-up Sueno (Atreides) was third in Saturday's GII Twinspires.com Louisiana Derby.

Cutting Humor is the 15th graded winner for his sire, and second out of a mare by former fellow Claiborne inmate Pulpit–2014 GIII Iowa Oaks heroine Size is the other. His unraced dam is a half-brother to MGISW sprinter Zensational (Unbridled's Song) and hails from the same extended female family of Claiborne and Adele Dilschneider's near $2-million earner Departing (War Front). Pun produced a filly by First Samurai's top earner and GISW Lea last February and was bred back to that stallion.