First Foals Out of Top Racemares On Offer at KEESEP 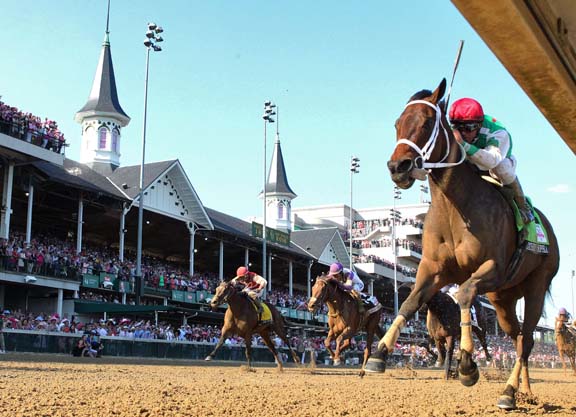 One of the many highlights of Book 1 of the Keeneland September Sale is the chance to see and purchase the first offspring of some of the top racemares in recent memory. This year is no different with first foals out of the likes of MGISW Cavorting (Street Sense) and GI Kentucky Oaks victress Cathryn Sophia (Street Boss) among the many high class yearlings on offer during the sale’s opening three days. TDN‘s Associate Editor Christie DeBernardis compiled a list of some of racing’s best and brightest mares’ first produce on offer during Book 1, which opens Monday, Sept. 9. (The following list is in hip order and is comprised of Grade I-winning mares.)

Offthetracks (Curlin) opened her account with a trio of wins, including the 2015 GII Schuylerville S. at Saratoga. Second in the 2016 GI Acorn S., the bay captured the GI Mother Goose S. at Belmont in her next outing and RNA’d for $1.1 million at that year’s Fasig-Tipton November Sale. Retained by Newtown Anner Stud, her first foal, a filly by red-hot sire Into Mischief, will be just the second yearling through the ring as part of the Blake Albina-Thoroughbred Services consignment.

Initially campaigned in Europe, Photo Call (Galileo {Ire}) came to America in 2014 and was placed in the barn of Graham Motion. She captured the 2015 GIII Violet S. and GI Rodeo Drive S. during her tenure there and was sold to Vinnie and Teresa Viola for $3-million at that term’s Keeneland November Sale. They transferred the bay to Todd Pletcher and she secured a second top-level win in the GI First Lady S. in 2016 before retiring to the breeding shed. Photo Call was mated to War Front for her first cover, which proved to be a prudent choice as the War Front/Galileo cross has been quite successful in recent years thanks to the likes of Fog of War and Roly Poly. Photo Call’s first filly by that top Claiborne sire can be found in Denali Stud’s barn.

Rachel’s Valentina (Bernardini) had big shoes to fill when she hit the track as the second foal and first daughter out of Horse of the Year Rachel Alexandra (Medaglia d’Oro) and she lived up to the hype right away. Named a ‘TDN Rising Star’ for her debut win at Saratoga, the bay followed suit with a victory in the 2015 GI Spinaway S. and was second in that year’s GI Breeders’ Cup Juvenile Fillies, as well as the 2016 GI Central Bank Ashland S. Her first foal is a colt by Curlin, who is consigned by Gainesway on behalf of Stonestreet Stables.

Runner-up in the 2013 GI Darley Alcibiades S., Rosalind (Broken Vow) went one better at Keeneland the following year with a win in the GI Ashland S. Sold to SF Bloodstock for $1-million later that season at the Fasig-Tipton November Sale, the chestnut was transferred to Chad Brown’s barn, winning the 2015 GII Sheepshead Bay S. and running third in that year’s GI E.P. Taylor S. Her first foal, a colt by Speightstown, is consigned by Bedouin Bloodstock.

Angela Renee (Bernardini) is a daughter of stakes-winning blue hen Pilfer (Deputy Minister), who also produced MGISW sire To Honor and Serve (Bernardini) and SW & MGSP Elnaawi (Street Sense). Initially campaigned by her breeder Siena Farm and Todd Pletcher, the bay won the GI Chandelier S. in 2014. Purchased by Don Alberto for $3 million at the 2015 Fasig-Tipton November Sale and sent to Brown, she closed her career in 2016 with a win in Monmouth’s Lady’s Secret S. Angela Renee’s first offspring, a colt by Empire Maker, will be presented by Paramount Sales.

Bounding (Lonhro {Aus}) did her best work in the land down under, earning the status of champion sprinter in New Zealand. Stonestreet bought her at the Magic Million National Broodmare Sale in 2016 for over $1.3 million USD and bred her to Curlin. The resulting colt is consigned by Eaton Sales.

A $30,000 EASSEP yearling, Cathryn Sophia more than repaid her owners for their investment. Kicking off her career with four straight dominant victories, including the 2016 GII Forward Gal S. and GII Davona Dale S., the bay captured the GI Kentucky Oaks in impressive fashion that May. She summoned $1.4 million from SF Bloodstock at that year’s Fasig-Tipton November Sale and was bred to the late Pioneerof the Nile. Cathryn Sophia was sent through the ring again carrying her first foal at the 2017 Keeneland November Sale, where she was purchased by Bridlewood Farm and Don Alberto for $2.3-million. The resulting foal was a filly, who is presented here by Denali Stud.

Out of GSW Promenade Girl (Carson City), Cavorting showed her talent from the start with a ‘TDN Rising Star’-worthy debut at Belmont in 2014. Winning the GII Adirondack S. at Saratoga in her next outing, the Kiaran McLaughlin pupil went on to capture the GI Test S. and GII Prioress S. in 2015, as well as the GII Ruffian S., GI Ogden Phipps S. and GI Personal Ensign S. in 2016. Retired to Stonestreet’s broodmare band, Cavorting was sent to the operation’s Hall of Famer Curlin for her first mating and the resulting filly is offered here by Eaton Sales, who also consigned Cavorting herself at the 2012 KEENOV Sale, where Banke bought her for $360,000. Click here for a TDN video of Cavorting and her 2019 Medaglia d’Oro filly.

Campaigned by California-based Reddam Racing and Doug O’Neill, Gomo (Uncle Mo)’s career high came at Keeneland when she won the GI Alcibiades S. in 2015. The bay was picked up by Bridlewood Farm for $1.5 million at the 2017 Fasig-Tipton November Sale carrying her first foal by Medaglia d’Oro. She produced a filly by the Darley stalwart Feb. 11 of last year and the bay is part of Denali Stud’s KEESEP consignment.