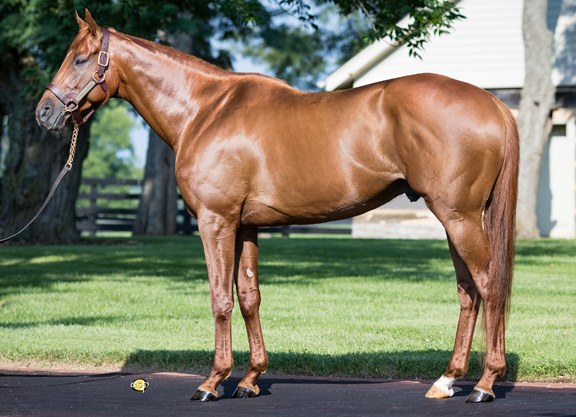 Although it will look quite different this year, the start of the yearling sales season is finally around the corner and 2017 Horse of the Year Gun Runner would appear to be poised at the head of his class if stud fee and weanling average are anything to be.

The son of Candy Ride (Arg) led all sires of first weanlings with an average of $275,923 with 13 of 14 sold, including a filly out of two-time Grade I winner Love and Pride (A.P Indy) who was the highest-priced weanling at the Fasig-Tipton November Sale, selling for $750,000 to Mike Ryan. A filly out of another dual GI winner in Pure Clan (Pure Prize) brought $475,000 at the Keeneland November Sale.

Of course, the yearlings that look to compete closely with Gun Runner's progeny belong to the late champion Arrogate, who was the only other first-crop weanling sire in 2019 to surpass an average of $200,000. Click here for the full table.

Gun Runner ranks as the most expensive stallion of his class with a fee of $70,000, a price that has stayed in place over his first three years at stud. Three Chimneys backed their sire's initial seasons in the stud barn with 171 mares in his first year, and another 166 last year.

“Gun Runner was received very well by breeders,” Tom Hamm, Director of Stallion Nominations for Three Chimneys, said. “In his first few books of mares, he had mares that not only had high-quality pedigrees, but they were also high-quality producers.” 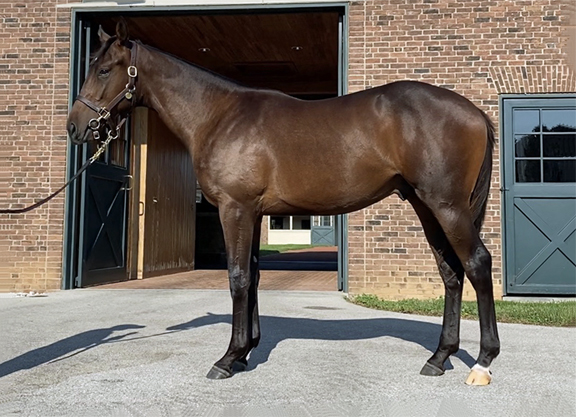 His dominating career began with a maiden-breaking debut as a juvenile and eventually culminated to a decisive victory in the GI Pegasus World Cup Invitation S. at five.

In the 17 starts between those efforts, the Asmussen trainee collected nine additional graded stakes wins, running in the money in all but two of his 19 career starts. He maintained a streak of five Grade I victories in his last five starts, starting with a record-breaking seven-length win in the Stephen Foster H. and then wrapping up with the Breeders' Cup Classic before the Pegasus finale.

“He had exceptional speed and stamina,” said Hamm. “He was able to win from a mile to a mile and a quarter against top-level competition. He really got over the ground so well, and was such a great mover. I think that, along with his depth of pedigree, is what made him an exceptional racehorse.”

Gun Runner's pedigree backs both his record on the track and now his career at stud. The champion is the son of the Grade II-winning Giant's Causeway mare Quiet Giant, who is a half-sister to four other stakes winners, including Horse of the Year Saint Liam (Saint Ballado) and another Three Chimneys sire in GI winner Funtastic (More Than Ready).

While discussing the physicals of both Gun Runner and his early progeny, Hamm's conversation always came back to how they efficiently and effortlessly carry themselves.

“Gun Runner got over the ground really well on the racetrack and I think that's reflected in his yearlings that we're seeing today,” Hamm said. “They're exceptional movers. As a whole, they're very correct and have a lot of quality to them.”

At the Three Chimneys yearling division, a son of Gun Runner out of the Brazilian Group 3 winner Ana Luisa (Elusive Quality) is preparing for the Keeneland September Sale.

“This yearling has got a lot of substance,” Hamm said. “He's very balanced and athletic like Gun Runner. He just gets over the ground and is a fluent mover.”

Another Gun Runner yearling slotted for the Keeneland sale is prepping at Mulholland Springs. The filly is out of the 2013 Canadian Champion Female Sprinter Youcan'tcatchme (The Daddy). 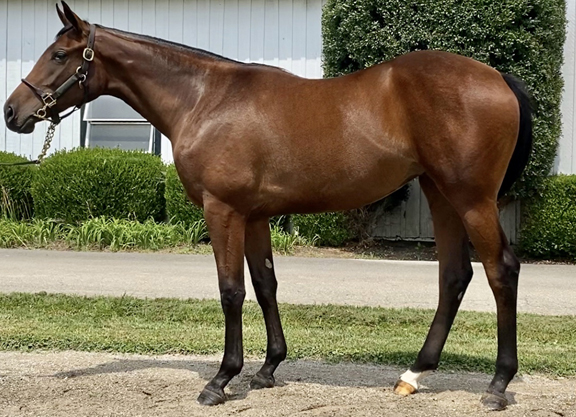 2019 Gun Runner filly out of Youcan'tcatchme (The Daddy)

Again, Martha Jane Muholland noted that the filly is an exceptional mover.

“She's a big, powerfully-made lovely filly,” Mulholland said. “She has a good top line, is correct and well-balanced, but most of all, I like her athletic, sweeping walk.”

“Obviously the expectations were high for Gun Runner,” the long-time breeder said. “We all took our very best mares to him. But what surprised me is that the foals out of these already-good mares were the best foals the mares had ever had. When that happened, I knew Gun Runner was something special.”

There will be plenty of his first-crop progeny to sort through this fall, with 65 additional Gun Runner yearlings cataloged for the Keeneland Sale. Twelve more are tabbed for the Fasig-Tipton Selected Yearlings Showcase on September 9-10 including a colt out of Speed Succeeds (Gone West), whose family includes Grade I winners Brilliant Speed (Dynaformer) and Touch Gold (Deputy Minister), as well as a filly out of Tap It All, a stakes-winning Tapizar mare who is a half-sister to GI Breeders' Cup Dirt Mile winner Spun to Run (Hard Spun).