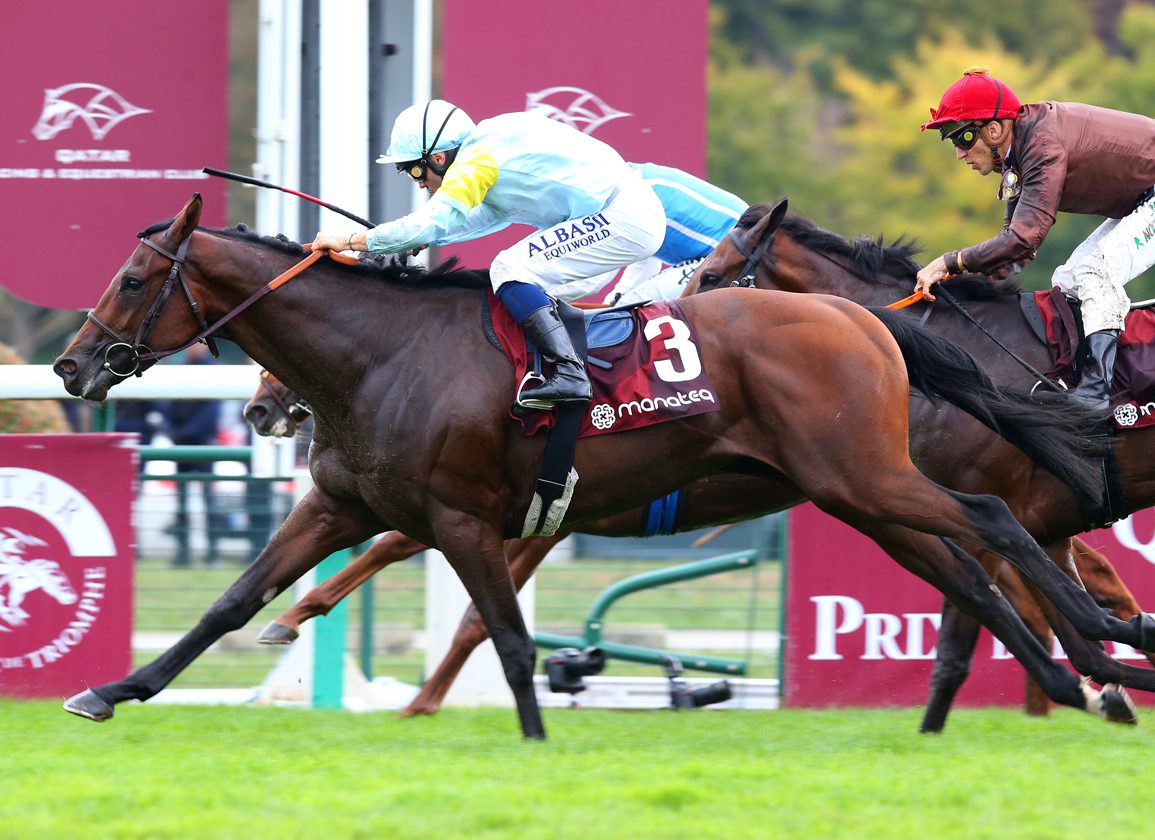 Andre Fabre had only outsiders in the G1 Qatar Prix de l'Arc de Triomphe, but Sunday's ParisLongchamp fixture's opener was a reminder that the general is still very much in the thick of it as Belbek (Fr) (Showcasing {GB}) captured the G1 Qatar Prix Jean-Luc Lagardere.

Upstaged twice since his success in Chantilly's G3 Prix du Bois June 19 when fourth behind Blackbeard (Ire) (No Nay Never) in that track's G2 Prix Robert Papin July 17 and when fifth to this race's absentee The Antarctic (Ire) (Dark Angel {Ire}) in the G3 Prix de Cabourg at Deauville Aug. 2, Nurlan Bizakov's homebred was 18-1 as a result in this “Win and You're In” for the GI Breeders' Cup Juvenile Turf at Keeneland next month.

Those odds would have been fitting for any other colt with his race record in this kind of test, but pure logic dictates that where the master of Chantilly is concerned this was a serious miss by the pari-mutuel faithful. Handed the perfect draft behind the leading trio, the bay had over a length to make up on Gamestop (Ire) (Lope De Vega {Ire}) as that rival looked to have stolen a march approaching the final furlong but Mickael Barzalona had ultimately timed it right with Belbek produced to shade it inside the final 50 metres. At the line, there was a neck between him and the Wertheimers' fellow outsider, with TDN Rising Star Breizh Sky (Fr) (Pedro The Great) the same margin behind in third.

“We always thought he had a lot of ability, but he failed to settle in his last two races and was helped by the ground and the faster pace here. He might go to Doncaster for the Futurity Trophy maybe,” Fabre said after greeting his sixth winner of this prize which was formerly run as the Grand Criterium.

Nurlan Bizakov added, “This victory means a lot, because it is our first Group 1 success with the first colt that we have bred in France, a country that is doing well for us.”

Christophe Ferland said of Gamestop, “He was relaxed today–I think the hood helped him to get into his stride he had a good draw this time unlike last time.”

Breizh Sky posted the fastest sectional in the race as he chased from the two to the one and trainer Alessandro Botti said, “He found himself stuck behind the wrong horses and Christophe Soumillon didn't want to come all the way outside, which was the right choice. In spite of everything, the colt ran an excellent race and finished at full speed. We knew that the soft ground would not bother him and I hope he has more room for improvement next year. If he's good, we could make the trip to the Breeders' Cup over a mile.”

Belbek, who is a flagbearer for Nurlan Bizakov's burgeoning Sumbe operation, was providing a further boost to the form of Blackbeard, if any was needed. This did little to alter the juvenile pecking order, with Blackbeard very much in the shade of Little Big Bear (Ire) (No Nay Never) at Rosegreen. Belbek has room for progression over further than this seven-furlong trip, being out of a mare with middle-distance connections in Bee Queen (GB) (Makfi). Bought out of Juddmonte's draft in the 2017 Tattersalls December Mares Sale for just 50,000gns, she is a daughter of Trojan Queen (Empire Maker) which makes her a half-sister to the G3 Hampton Court S. winner Sangarius (GB) (Kingman {GB}) and to the G3 Derrinstown Stud 1000 Guineas Trial-placed Emergent (GB) Showcasing's sire Oasis Dream (GB).