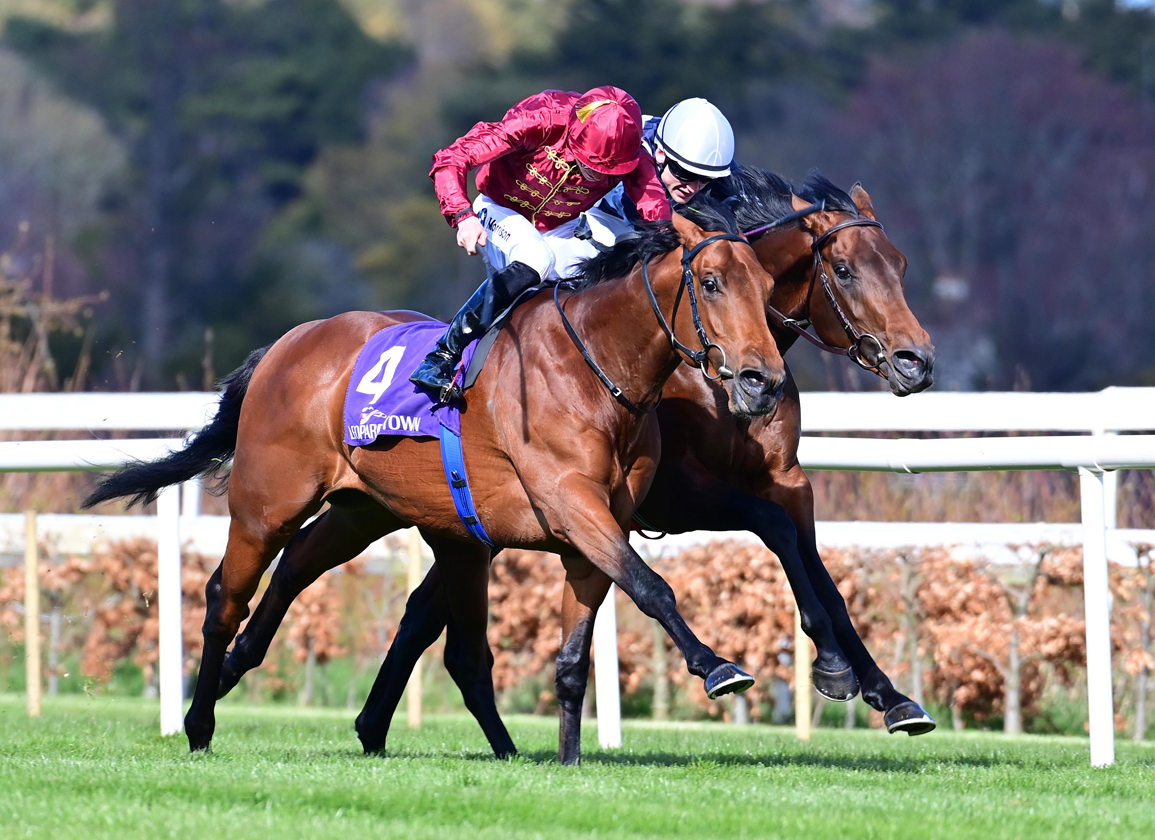 Aidan, Joseph and Donnacha O'Brien were responsible for six of the nine runners in Saturday's G3 P.W. McGrath Memorial Ballysax S. and it was the pair of juniors who played out the finish with the youngest prevailing after a thriller involving Piz Badile (Ire) (Ulysses {Ire}) and Buckaroo (GB) (Fastnet Rock {Aus}). Flaxman Stables Ireland's Piz Badile had been a half-length second to TDN Rising Star Duke de Sessa (Ire) (Lope de Vega {Ire}) in the nine-furlong G3 Eyrefield S. here in October, but had a three-pound pull with that rival and a smoother trip tracking the leading quartet under cover throughout the early stages. Getting a charmed run up the inner to lead passing the two-furlong marker, the 4-1 second favourite was headed by Joseph's Buckaroo a furlong later but answered Gavin Ryan's call to get back in front near the line. There was a short head between them there and 3 3/4 lengths back to the 10-3 favourite Duke de Sessa, of whom Dermot Weld had warned would need the reintroduction and who was briefly held up in his run turning for home. “He's going to be better going a mile and a half, so it's nice to see him do that over 10 furlongs,” Donnacha said of the winner, the first in black-type company from the first crop of his Cheveley Stud-based sire (by Galileo {Ire}). “He's a beautiful horse and I think a lot of him, so I would have been disappointed if he wasn't there or thereabouts. He'll probably come back for the [G3] Derrinstown [Derby Trial] and then on to Epsom. He's still a big frame of a horse and I actually think he'll be better next year.”

Piz Badile, who had scored on his debut at Killarney in July and was considered unlucky on his only other start in the Eyrefield, hails from a high-class Niarchos family containing some of the operation's biggest names. He is the first foal out of the Listed Prix Zarkava winner and G2 Prix Corrida runner-up That Which Is Not (Elusive Quality), herself a daughter of the talented Shiva (Jpn) (Hector Protector) who was successful in the G1 Tattersalls Gold Cup and a regular at the top table for Warren Place. Shiva, who is also the second dam of the G2 Gimcrack S. and G2 Champagne S. winner Threat (Ire) (Footstepsinthesand {GB}), is a full-sister to the G2 Prix Foy winner Limnos (Jpn) and a half to the G1 Epsom Oaks heroine Light Shift (Kingmambo). She is the dam of Piz Badile's G1 International S. and G1 Eclipse S.-winning sire Ulysses himself, which gives this winner a 3×3 inbreeding to Lingerie (GB) (Shirley Heights {GB}). Also connected to the leading performers Main Sequence (Aldebaran) and Cloth of Stars (Ire) (Sea the Stars {Ire}), That Which Is Not has the 2-year-old colt Yosemite Valley (GB) (Shamardal) and a yearling filly by Kingman (GB).