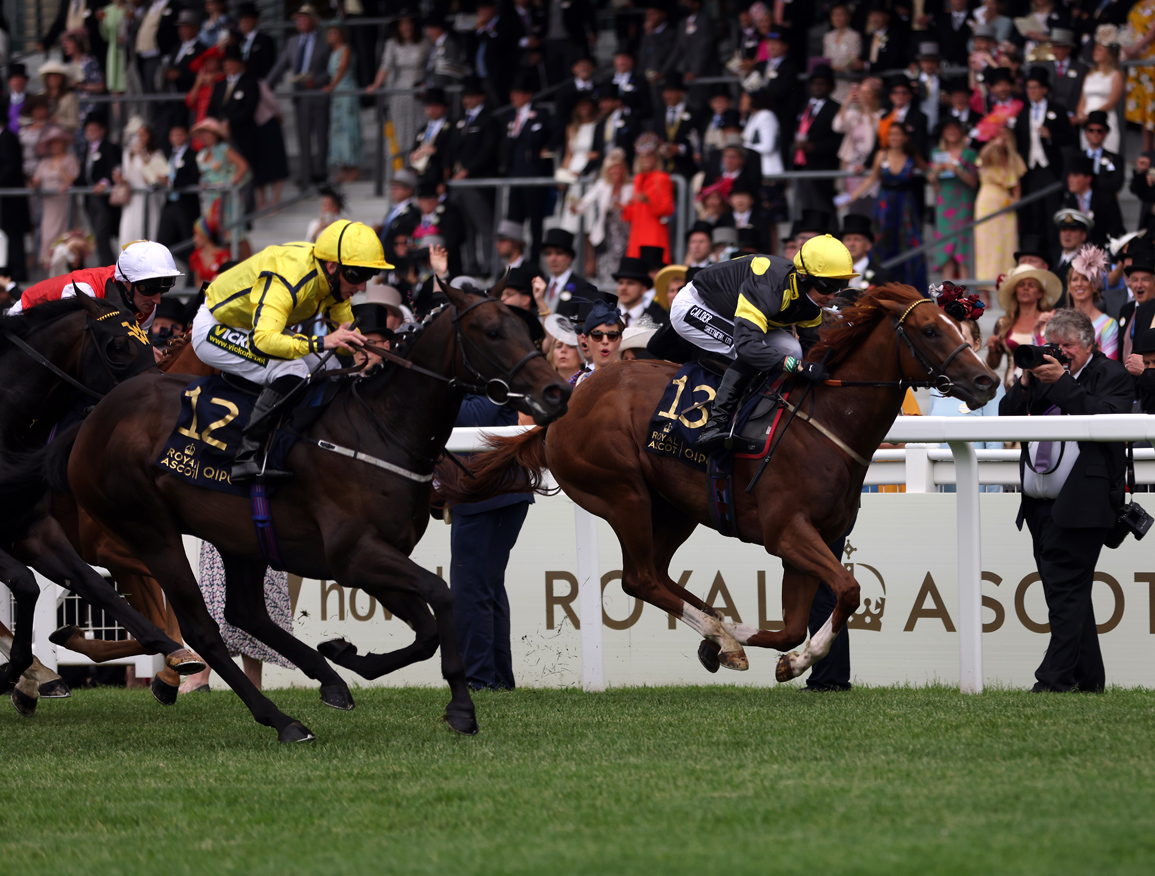 Impressive both visually and on the clock when off the mark over this five-furlong trip at Hamilton eight days previously, Sheikh Rashid Dalmook Al Maktoum's Perfect Power (Ire) (Ardad {Ire}) delivered the same acceleration to take Thursday's G2 Norfolk S. and provide his Overbury Stud-based first-season sire with a first black-type winner. Drawn in 10 and forced to come up the middle which had looked unfavourable over the first two days, the Richard Fahey-trained £110,000 Goffs UK Breeze Up graduate was outpaced and towards rear at halfway in this GII Breeders' Cup Juvenile Turf Sprint qualifier. As he had against lesser company in Scotland the week before, the 14-1 shot turned on the afterburners to arrive into contention towards the stand's side as the line neared. With Go Bears Go (Ire) (Kodi Bear {Ire}) keeping all on the far side at bay throughout, it was Perfect Power who swooped in the final stride to crown Paul Hanagan's comeback from serious injury on the other part of the track. The judge was needed with the front two split wide apart and it was officially a head that separated them, with just a nose back to the stand's-rail runner Project Dante (GB) (Showcasing {GB}) in third. In a tight finale, the 5-1 favourite Cadamosto (Ire) (No Nay Never) was just half a length away in fourth coming up the far rail. “Beautiful,” said Hanagan, who had recently completed his convalescence having fractured his T3, T4 and T6 in a fall last February. “I don't usually get emotional, but I'm lucky to be here at all after the accident. It's been a very character-building few months, but I had the will to get back and I appreciate I got a second chance to take with both hands. This is what it's all about–it's just an amazing feeling.”

Third on debut over this trip behind the James Tate-trained Royal Aclaim (Ire) (Aclaim {Ire}) in a May 25 Newcastle novice that had already started to work out well, Perfect Power may not have beaten any stars at Hamilton but the manner of his performance stayed with all who witnessed it. Running similarly in this race which was stripped of one of its more-fancied runners as the Clive Cox-trained Instinctive Move (GB) (Showcasing {GB}) reared in the stalls, he was a touch stranded up the centre but at least had Lucci (Not This Time) to aim at dead ahead. That Ward runner only gave best in the last 50 yards as Perfect Power and Project Dante swamped him, while on the far side it was Go Bears Go and Cadamosto who had it between them in a thrilling finale.

“They went quite hard and I had to sit and suffer on him, but I'm glad I did as he didn't half power home and run through the line,” Hanagan added. “As a horse, you couldn't get better and that's probably what got him beat first time–we were all expecting him to win, but he got stage fright. He'd come out of that so well and Hamilton brought him on again. He's going the right way.” Richard Fahey added, “It was a good race for me to watch, as we had three runners in it with two involved in the finish [including the sixth-placed Khunan (GB) (Twilight Son {GB}). I thought we'd got beat, but I'm just delighted for the whole team at Musley Bank, it's a great result for us all and I'm delighted for Sheikh Rashid, he's supported us the last two or three years now and to get him a Royal Ascot winner is fantastic, he's a real nice man. He was slowly away at Newcastle and got beat because of it, so it was a good decision to go to Hamilton a week ago. I always think it's tough for a once-raced two-year-old, it takes a good one to do it so it probably helped us today.”

Perfect Power, who was emulating the Royal Ascot success of Ardad who took the Listed Windsor Castle S. in 2016, is the first foal out of a granddaughter of Saga D'Ouilly (Fr) (Linamix {Fr}) who is in turn a full-sister to the Arc hero Sagamix (Fr). She is also a half to the G1 Criterium de Saint-Cloud-winning sire Sagacity (Fr) (Highest Honor {Fr}) and to Shastye (Ire) (Danehill), who produced the high-class Galileo (Ire) trio of Japan (GB), Mogul (GB) and Secret Gesture (GB) and is one of the world's leading broodmares. This is also the Aga Khan family of Sagamiyra (Fr) (Sea the Moon {Ger}), a 4-year-old filly in training with Mikel Delzangles who took the Listed Prix Maurice Zilber in May. The dam Sagely (Ire) (Frozen Power {Ire}) is a half to the Listed Upavon S. runner-up Sagaciously (Ire) (Lawman {Fr}), who beat her when they raced together and went one-two in a decent 10-furlong handicap at Glorious Goodwood five years ago. Her yearling filly is by Kodiac (GB), while she also has a colt foal by Galileo Gold (GB).