Fire At Will Tunes Up in Advance of Fountain of Youth 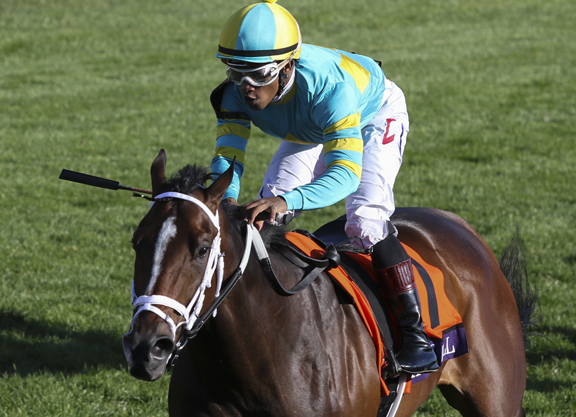 Fire At Will | Breeders' Cup/Eclipse Sportswire

Breeders' Cup winner Fire At Will (Declaration of War) tuned up for his 3-year-old debut Saturday at Gulfstream Park with a five-furlong move in 1:02.75. He is slated to start in the Feb. 27 GII Fasig-Tipton Fountain of Youth S.

Fire At Will broke his maiden over a sealed but sloppy main track at Saratoga in the With Anticipation S. in September, then captured the GII Pilgrim S. over the Belmont lawn the next month. He was a three-length victor of the GI Breeders' Cup Juvenile Turf in November in Keeneland, but connections are aiming toward a return to the dirt in the Fountain of Youth. It will be his first start on a fast main track.

“It's a tough task, whether he's a dirt horse or a turf horse, but he's earned the chance,” said Maker.

The Fountain of Youth is to be contested at 1 1/16 miles, a half-furlong further than Fire At Will's Breeders' Cup score but the same distance as his Pilgrim win.

This story was posted in Shared News, Top News and tagged Fire At Will, Fountain of Youth S., workouts.