Finger Lakes Woes Could be Big Blow for NY 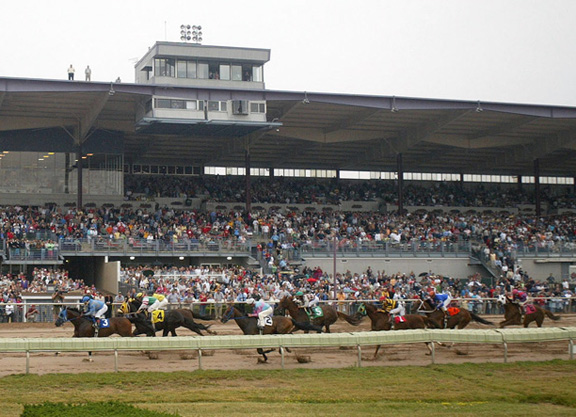 Finger Lakes is in deep trouble, so much so that Finger Lakes HBPA President Dave Brown says there is some chance there will not be a meet there this year. That’s a dire prediction which could affect more than just a B-level racetrack operating far from the spotlight. Finger Lakes plays an important role in New York racing and in particular New York breeding, and its demise would no doubt have a serious ripple effect throughout the state.

New York breeders and Finger Lakes horsemen knew there were problems on the horizon when the state decided to expand casino gaming and granted a license to Thomas Wilmot to open a casino 27 miles from the track. When the del Lago Resort & Casino, which is located in Tyre, NY, opened Feb. 1, the reality really hit home. Finger Lakes is a “racino,” one that subsists primarily on slot machines and does not have many amenities. The del Lago is typical of the casinos now being built, and includes a hotel, restaurants, entertainment, a 2,400-seat auditorium, 2,001 slot machines and 77 table games. The del Lago is not required to make any contributions to Finger Lakes–neither the track’s owners nor to purses.

Finger Lakes, which is owned by Delaware North, figures to have a hard time being competitive with the new casino, and with 70% of the purse money paid out at Finger Lakes coming from VLT revenue, there’s no doubt that the upstate New York track is going to take a hit. The question is, how big of a hit.

Jeff Cannizzo, the executive director of the New York Thoroughbred Breeders, Inc. said Finger Lakes is a vital part of the state’s breeding program. While every New York breeder hopes to breed a horse that can be a winner at the NYRA tracks, it doesn’t always work out that way. Finger Lakes is their safety net and if it were to go away, the impact that would have on the state’s breeding program would be significant.

“I’m very worried,” Cannizzo said. “Finger Lakes is the B outlet to racing in New York state and every state has to have that B level infrastructure. If Finger Lakes is to suffer that would be a devastating blow and it would have a ripple effect throughout the entire New York-bred population.”

“Because of the new casino, they gave Delaware North a significant tax break,” said Buckley. “The new casino is sure to make a lot of money. We, the horsemen, are the odd men out. This casino is literally 27 miles east of Finger Lakes and there was nothing in that casino legislation that assured our purses would stay the same. Nobody thought about us.”

Because the del Lago has been open for less than three weeks, it’s too early to tell what the impact on Finger Lakes is going to be, and that uncertainty is creating more problems. With no one knowing how much money is going to be available for purses, the track–which typically operates a mid-April to late November schedule–has held off writing any condition books, setting a purse structure or even committing to a racing schedule. According to Finger Lakes HBPA President Dave Brown there are already two trainers who have said they won’t be coming back to Finger Lakes this year and he expects more will follow.

“The trouble is things are so up in the air here some people believe they can’t afford to take a chance,” Brown said. “So far, everyone else has been held in check as we keep preaching to them to have patience.

As for Finger Lakes’ future, there are numerous scenarios. Brown said one is that the HBPA will not sign a contract with Delaware North this year, which would shut down both the racing and the casino. He said he is not interested in signing any agreement that is a band-aid solution and will instead seek guarantees that will keep the track alive and the purse structure at a healthy level.

“I suspect we won’t run this year,” he said. “My board and I are not going to sign a contract that guarantees that in a year we’re going to close. If we cut back to 100 days, there’s no way these people, because of the makeup of this track and the makeup of the trainers here, can survive. It’s already time for us to draw a line in the sand. I hope to sign a good deal that keeps this place in business and keeps the breeders and everybody else happy. There’s a lot of talk about what are we going to do if no one comes through with anything. That would mean taking away people’s livelihoods. Back them into a corner and they’re going to fight back and you can’t blame them.”

If the del Lago cuts significantly into Finger Lakes’s gaming business there is some chance the track will have to close on its own. Finger Lakes President and General Manger Chris Reigle told the Rochester Democrat & Chronicle that even with the tax break it is receiving from the state due to the competition from the del Lago there is a chance that it will not be enough to offset the inevitable losses in revenue and keep the operation profitable.

“The tax credit is going to be about a 10% difference,” Riegle told the paper. “It’s not large enough to maintain the gaming operations and also support the racing. It isn’t enough money to cover both problems.”

Other scenarios, neither of which sit well with the horsemen, would be for Finger Lakes to remain in business but with a shorter race meet and much lower purses. The track, which would normally open in mid-April, paid out $17 million in purses in 2016.

Though the purses are not huge at Finger Lakes, the owners and breeders of New York-breds annually make a great deal of money when their horses produce there.

Cannizzo believes that should Finger Lakes shut down, it would also hurt NYRA. He notes that 49% of all starters at the NYRA tracks are state-breds. A shuttered Finger Lakes would no doubt lead to fewer horses being bred in the state and that would reduce the available horse population at NYRA.

As bleak as the situation may seem, Brown and others are hopeful that the state government will come through and find a solution that will keep Finger Lakes purses at 2016 levels. Brown said several politicians from the Finger Lakes area are doing their best to come up with a solution and that Gov. Andrew Cuomo is aware of the problem and has made statements indicating he wants to help. But where will the money come from? Delaware North is likely to have its own financial problems because of the new competition and may not want to put up more money for purses, while the del Lago is under no obligation to help out racing.

As Finger Lakes awaits its fate, the only certainty right now is that nothing is certain.