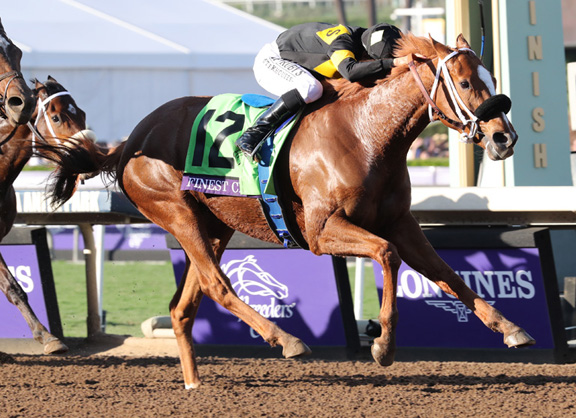 The GII Great Lady M S. heroine and GII Santa Monica S. runner-up switched to grass for her two most recent attempts at Del Mar, a fourth-place finish in the GII Yellow Ribbon H. July 16 and a close second, beaten only a head, in the GII John C. Mabee S. Sept. 4 behind Avenge (War Front), who ran a good third in the GI Breeders' Cup Filly & Mare Turf earlier on Saturday's program.

Working bullets in the interim, Finest City sat a close-up third while sitting three wide through a half-mile in :44.82 and emerged with the lead at the top of the lane. Wavell Avenue (Harlington) made a menacing sweeping move on the far turn and appeared to be going best of the two as they turned for home, but Finest City found plenty more under the spurring of Mike Smith in the stretch, gamely turning back the 2014 champ of this event for a 3/4-length triumph. Paulassilverlining (Ghostzapper) stayed on well for third after racing prominently throughout.

“She sends herself out of there and Mike chose not to take her back and it was absolutely perfect,” said Kruljac after saddling only his second winner on the year. “She has high cruising speed and I could tell he was in hand. It is just such an honor to compete with all these top trainers and have a top filly.”

It was Breeders' Cup winner number 24 for the aforementioned Hall of Fame reinsman, the all-time winningest rider in World Championships history.

“I was really happy for [Ian Kruljac] and his first big opportunity,” Smith said. “What a way for you to get your career going. The old handicapping angle of 'turf to dirt' and a long turf race to a middle distance sprint is really a good way to get a horse ready for a race like this. They learn to relax a little better and it's easier on them.”

Winning owner Tyler Seltzer added, “Last night when I couldn't sleep, I went upstairs to my office in my house, and I found a mug from the first time I ever attended a Breeders' Cup when I was 11 years old. It was November 1st, 1986, 30 years ago this month here at Oak Tree at Santa Anita. And I came with my mom. My mom's no longer alive. And her initials are on the back of our silks.”

He continued, “I fell in love with horseracing at a very young age. To be back here 30 years later at a place like this in a race like this, with people like this and a horse like that, is just beyond belief. It's really–I'm probably going to get too emotional, but it's really special to be here. And I have my wife, my kids, in-laws, family friends, it's a fantastic day. I've got to thank the Kruljacs, as I said out there. An honor to have a Hall of Fame legend to ride her, is pretty special.”

The winner's multiple stakes placed dam Be Envied (Lemon Drop Kid), a homebred for William S. Farish Jr., most recent produce is a colt by Tale of Ekati in 2015. Her 2-year-old filly Grand Prix (Tale of the Cat) finished third in her first try on grass at Santa Anita Oct. 8. Be Envied, a half-sister to millionaire Burning Roma (Rubiano), brought $37,000 from HnR Nothhaft Horse Racing at the 2011 Keeneland November Sale carrying the future 2016 Breeders' Cup winner. She RNA'd for $24,000 at that same sale in 2014.