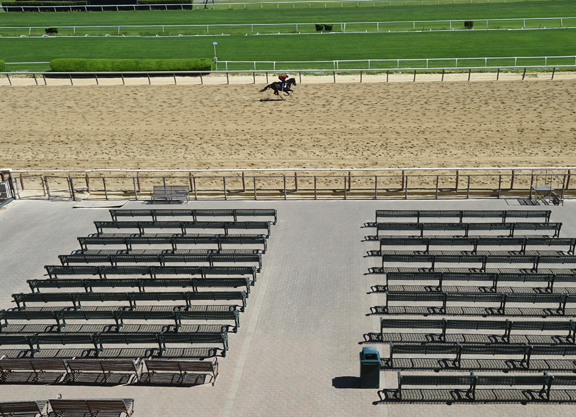 According to a Newsday story, a 2-year-old filly let out of her stall Thursday at Belmont Park by a former employee resulted in a fall that led to the filly's death. The former employee, identified by the Nassau County Police Department as Ramzan Antooa, 38, of Elmont, had been spotted at approximately 7:45 p.m. by Belmont's security personnel releasing the filly, the paper said. He was arrested at the scene and charged with burglary and reckless endangerment of property.

Arraigned Friday at First District Court, Antooa was freed without bail. The case is due back in court Sept. 21. Antooa's burglary charge is a felony, while the endangerment charge is a misdemeanor.

“At the time of this incident, Ramzan Antooa held a license to work at New York racetracks including Belmont Park and was employed by a trainer in good standing,” said Patrick McKenna, the New York Racing Association's director of communications and media relations. “His license has since been summarily suspended pending a formal hearing on revocation.”

McKenna told Newsday the deceased horse was a filly named Pasta (Fr) (Frankel {GB}). There was an unraced filly by that name who last worked three furlongs at Belmont July 26. The owner and trainer's names were not immediately available, but the filly had gone through the Tattersalls October yearling sale last year as an 150,000gns RNA. She was bred by Al Asayl Bloodstock Ltd.