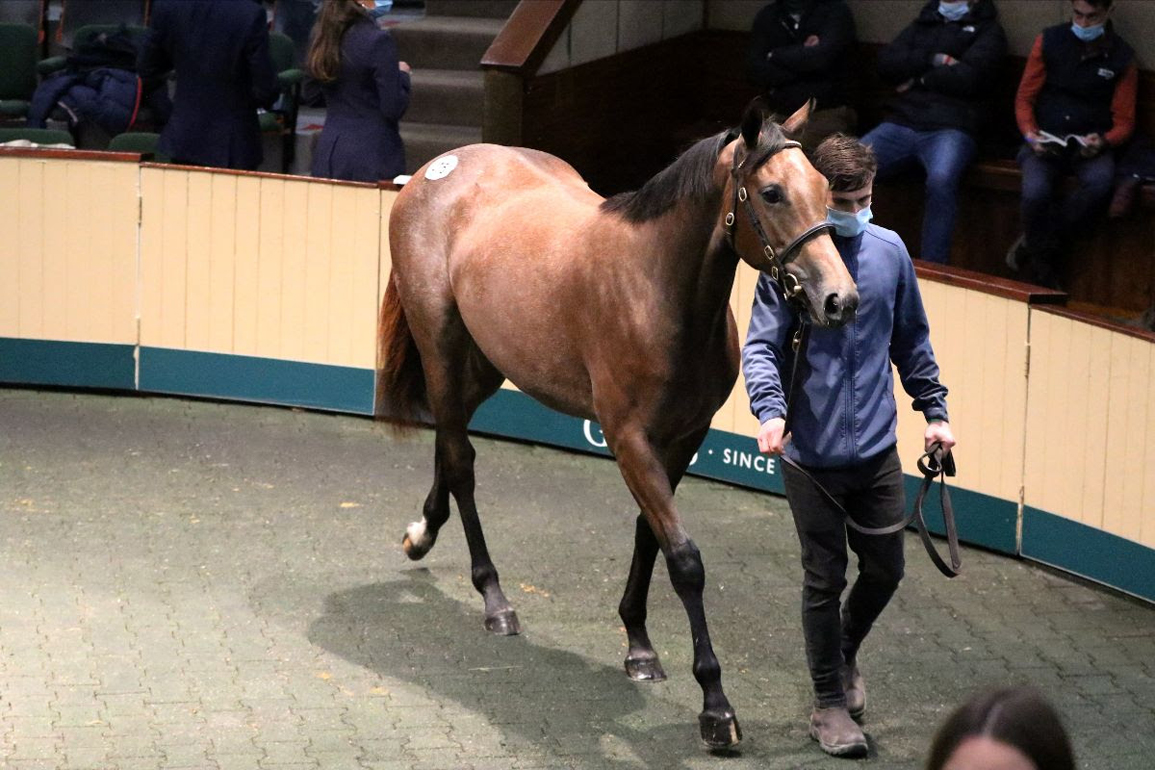 There was barely time for the dust to settle on a successful renewal of the Goffs Orby Yearling Sale before the firm continued on Thursday with the first of two days of its Sportsman's Yearling Sale, which likewise returned strong results.

Topping trade on Thursday was a Dark Angel (Ire) filly from Lumville Farm knocked down to Cathy Grassick of Brian Grassick Bloodstock for €140,000. Bred by Shadwell, Lot 475 is the first foal out of the listed-placed Ghazawaat (Fr) (Siyouni {Fr}), whose dam and half-sister Simply Striking (Fr) (Kheleyf) were both stakes-placed.

“In terms of this sale she was a standout and we're delighted to have gotten her,” said Grassick. “I've bought horses this week for a new client and ones from America and Australia and they are going to keep their purchases in training here which is great to see.”

There was one Siyouni colt offered on the day, and Tom Whitehead of Powerstown Stud swooped to get him at €105,000. He is likewise a first foal; lot 577 was bred by Sunderland Holding and is out of the placed Dawn Approach (Ire) mare Miss Aiglonne (GB), herself a daughter of the G3 Prix Fille de l'Air victress Aiglonne (Silver Hawk) and a half-sister to four stakes winners including G1 Prix d'Ispahan scorer Mekhtaal (GB) (Sea the Stars {Ire}) and G3 Prix Thomas Bryon victor Normandy Bridge (Fr) (Le Havre {Ire}).

Bungle Inthejungle (GB) has been in the news of late thanks to his G1 Nunthorpe S. winner Winter Power (Ire), and a filly by the Rathasker Stud sire found favour with Rodrigo Goncalves and Robson Aguiar at €90,000. The filly (lot 630) offered by Rathasker is out of the listed-winning Princess Janie (Elusive Quality), and a half-sister to the listed-placed Lundy (GB) (Fastnet Rock {Aus}), and she will be raced by Kia Joorabchian's Amo Racing.

“She has been bought in partnership with Robson Aguiar for Amo Racing and she is a lovely filly,” said Goncalves. “She looks a really sharp and early type and she is by the same sire as Winter Power so hopefully she can progress like her. She looks a filly with a real future.”

First-crop sire US Navy Flag enjoyed good results at Orby, and a filly by him bred by Peter and Hugh McCutcheon sold for €82,000 on Thursday to Montgomery Otto.

Cotai Glory has enjoyed good results with his first runners this season, and he accounted for three of the top 10 sellers on Thursday, including a filly (lot 497) picked up by Joe Foley for €68,000.

All yearlings purchased at the Sportsman's Sale are eligible for the €100,000 Goffs Sportsman's Challenge, which will be held over six furlongs at Naas next September.