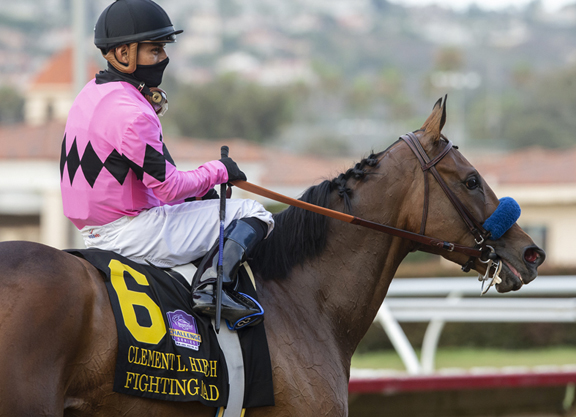 Grade I winner Fighting Mad (New Year's Day) looks to return to winning ways as she kicks off her 5-year-old season Saturday in the GIII La Canada S. at Santa Anita. Starting off last term with a third in the six-panel GIII Desert Stormer S. in May, the homebred scored a decisive victory over the re-opposing Hard Not to Love (Hard Spun) when stretched out to two turns in the GII Santa Maria S. just two weeks later. Capturing the GI Clement L. Hirsch S. next out at Del Mar in August, the bay was third when last seen in the GII Zenyatta S. in Arcadia Sept. 27.

Hard Not to Love, heroine of the 2019 GI La Brea S., captured the GII Santa Monica S. last February and was second in the GI Beholder Mile prior to her second in the Santa Maria. Failing to fire when sixth in the Clement Hirsch, the bay was a close second in the Zenyatta.