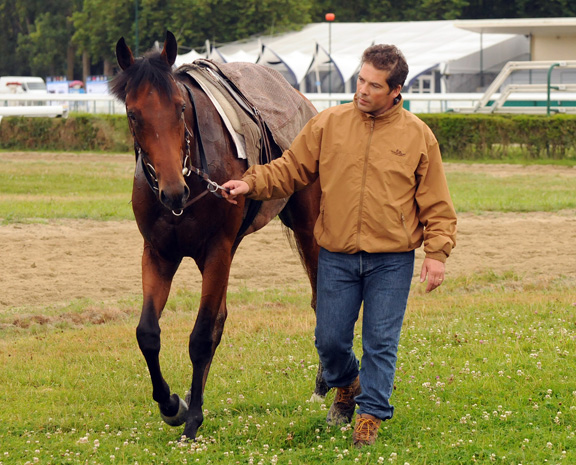 In less than a decade with a training licence, Christophe Ferland has made a determined bid for a seat at the top table of the French training ranks, earning his right to a place alongside the likes of Alain de Royer Dupre, Jean-Claude Rouget et al with his eye-catching strike-rate.

His success is made all the more notable by the fact that he isn't based in the fashionable French Thoroughbred headquarters of Chantilly, or even in the Rouget-dominated southern training centre of Pau, preferring instead to season his young horses and raise his two young sons in the seaside resort of La Teste de Buch. The location has only become known beyond the French racing cognoscenti since Osarus starting staging its yearling sale and, more recently, breeze-up sale at the racecourse and training centre which is an hour's drive south-west of Bordeaux.

“I love it here,” says the amiable Ferland, whose excellent grasp of the English language was honed while working for Peter Walwyn and Charlie Mann in Lambourn before he became assistant trainer to Sir Mark Prescott. His two-year stint with the doyen of Newmarket trainers is an apprenticeship which is both feared and revered in equal measures by its participants and has been completed by many of the current top rank, including William Haggas and Simon Crisford.

He continues, “It's a lovely part of the world and we really enjoy living here and educating our children here: I have my job but I also have my life. It's a great training centre where we are lucky to have plenty of runners and plenty of winners. I know Chantilly is the best training centre in the world––I was born there so I will always love it––but I am very happy in La Teste. We have a very good director doing lots of things for the trainers and there has been a new track built this year so everything is going the right way.”

Things are certainly going the right way on the professional front for the 40-year-old who was born into the racing world but opted take a slightly different route to his jockey father. Ferland's major European breakthrough came in his fourth season of training when the bold dark brown colt Dabirsim (Fr) advertised his young trainer and the Gainesway stallion Hat Trick (JPN) to a wider audience during a magnificent unbeaten juvenile campaign which culminated in victories in the G1 Darley Prix Morny and G1 Qatar Prix Jean-Luc Lagardere. Having become the first trainer to send out a Group 1 winner from La Teste, two years later Ferland was back in the limelight on Arc day, winning the G1 Total Prix Marcel Boussac with Indonesienne (Ire) (Muhtathir {GB}) for her owner-breeders, Alain and Gérard Wertheimer.

It is another 2-year-old filly, Cavale Dorée (Fr) (Sunday Break {JPN}), whom he hopes will advertise his name on the international stage when she becomes his first starter at the Breeders' Cup meeting in the GI Juvenile Fillies Turf.

“To be honest it's a dream,” says the trainer. “I've always watched the Breeders' Cup and now we are here, we will have our first runner and my staff will wear the purple and white jackets with the name of our horse on it.”

Cavale Dorée, bought in the shadow of Ferland's stable at last year's Osarus September Sale for €34,000, has subsequently been sold privately to American owner Martin Schwartz following her victory in the G3 Prix du Calvados in August. The filly arrived in Santa Anita on the back of a fifth-place finish in the G1 Prix Marcel Boussac, beaten less than four lengths after fighting for her head early in the race from her hold-up position in the rear of the field.

Ferland explains, “I bought her as a yearling and shared her with my two good friends and we had a really good offer after Deauville that we could not refuse. Martin Schwartz bought her with the hope of running in the Breeders' Cup but we had to go through the Marcel Boussac first and I was a bit disappointed. I gave the orders to [jockey] Pierre-Charles Boudot and I think it's a little bit my fault––I should have let him ride her as he felt.”

Flavien Prat, who rode Indonesienne to Group 1 glory for Ferland, will again team up with the trainer when taking the ride on Cavale Dorée at the Breeders' Cup. The young filly, who bids to follow Flotilla (Fr) (Mizzen Mast) and Chriselliam (GB) (Iffraaj {GB}) to become the third European-trained winner of the Juvenile Fillies Turf in its nine-year existence, will be out on the track on Tuesday morning having arrived at Santa Anita on Saturday night in company with Ferland and his wife, Aude.

The trainer, who is relishing the prospect of temporarily swapping the quiet pine-lined training grounds of La Teste for a view of Santa Anita's more iconic pine trees, says, “I don't know if this filly will be good enough but she worked well at home before she left and we hope and we have put everything together to have a good result.”

Win or lose, Ferland can look forward to returning to a stable which will contain in excess of 100 horses for next season. While a Breeders' Cup victory would increase his standing globally, he doesn't currently lack international support from owners, with his stable's patrons hailing from America, Australia, England, Ireland and Lithuania. His major patrons domestically are the Wertheimer brothers and Gerard Augustin-Normand, while German-based Simon Springer, the owner of Dabirsim, has continued to support him with a number of yearlings by the young stallion, whose first runners we can look forward to in 2017.

Ferland is, however, eager to play his own part in France's terrific success rate at the World Thoroughbred Championships, where his country's roll of honour stretches to Arcangues, Spinning World, Six Perfections (Fr), Last Tycoon (GB), Banks Hill (GB), Flotilla (Fr), Shirocco (Ger), Karokontie (JPN), and of course the most prolific Breeders' Cup winner of them all, Goldikova (Fr).

“I think it's something a bit special for French people,” Ferland says of his own quest. “Everyone is dreaming of an Arc winner and I dream of that as well. I wake up every morning to find a horse good enough for the Arc but the Breeders' Cup is really something special. We have the spirit of Goldikova to follow.”