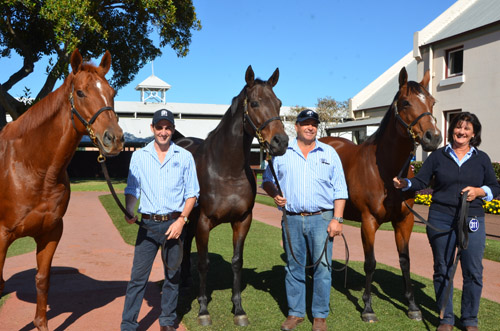 There are five breeders with multiple runners contesting Group 1 races on Derby Day at Flemington, and no matter the size, age or status of their enterprise, it's something they can all celebrate with pride.

It's a fair bet, though, that Darley, Dean Fleming, Widden Stud and Windsor Park Stud will struggle to match the excitement felt by the Fergusons of Bell River Thoroughbreds.

Andrew–or “Ferg” as he's better known–and Georgie will be in Flemington finery to cheer for their Group 1 graduates, sensational colt Extreme Choice (Aus) (Not A Single Doubt {Aus}) in the G1 Coolmore Stud S., and talented mare Denmagic (Aus) (Denman {Aus}) in the G1 Myer Classic.

And, for once, they'll be able to enjoy the day without worrying about their horses at home. Earlier this year the Fergusons decided to take a break from the Thoroughbred industry and sold 35 mares and weanlings for A$4.5-million at the Inglis and Magic Millions sales. They've now sold their farm near Wellington in central New South Wales and plan to do some extended travelling while they consider what they want to do next. The Fergusons don't intend to waste either their good fortune or their hard work, and look forward to having precious time to relax and explore–and dream again.

Meanwhile, Andrew is happy to look back at Bell River's path to the twin peaks of Group 1 glory and sale-ring success. Several people, stallions and mares have been important along the way, but Extreme Choice's sire Not A Single Doubt was there from the start. Andrew explains, “Georgie's late stepfather Bruce Reid raced Savabeel, Bradbury's Luck and Econsul, and was a shareholder in Not A Single Doubt, so I followed his racing career very closely. What got my attention was his brilliant speed–I remember watching the Magic Millions replay and thinking his sectionals must have been unbelievable, he got into so much trouble in that race and was beaten only by Dance Hero. Later on when I got serious about breeding, I realised there's a lot of depth to his pedigree, which is very important when you're going to take a punt on a third- or fourth-season sire.”

After Bruce Reid's death in 2005, the Fergusons helped to manage his bloodstock, which included sending two mares to Not A Single Doubt in his third season. The results, a pair of colts sold for A$42,000 and A$40,000 in 2010, won 13 races between them.

The progress of the Fergusons' breeding programme mirrored Not A Single Doubt's steady rise, but not everyone shared their enthusiasm, as Andrew recalls. “One year we had two colts by him at Melbourne Premier and most agents and trainers would say, 'We'll see your draft, but don't bother about the Not A Single Doubts.'”

“If I didn't have faith in him, I would have quit then, but in this industry you have to swim against the tide if you're going to be successful–you have to back your judgment,” he added. “It's a help if the stud farm does the same, and sticks with the stallion too, as Arrowfield did with Not A Single Doubt.”

“I'd had a bit of luck selling horses and along with very good clients, Bob Hogno and Lloyd Walker, I decided to take a punt off the back of Not A Single Doubt's two biggest books of mares. So we bought every good mare in foal to him for a total of about A$300,000.”

One of them was Extremely (Aus) (Hussonet), carrying Extreme Choice, who was subsequently bought by Mick Price's racing manager Luke Wilkinson for A$100,000 at the 2015 Inglis Classic Yearling Sale. This year Extremely, again in foal to the now sought-after sire, returned to the sale ring and sold for $735,000 to Yu Long Investments.

That's why Andrew knows exactly what it means to choose the right stallion and stick with him. He says simply, “Not A Single Doubt has changed my life. He's made me financially secure and given me my greatest joy in racing, breeding a double Group 1 winner. And perhaps more to come yet.”

A few people have been important, too. “None of this would have been possible without Georgie, she's been incredible, and to do it with our sons James and Jock has been very special,” Andrew said. “There are things we've had to sacrifice, but I think we would do it all again.”

As he prepares to head to Flemington, Andrew signs off with a few suggestions for breeders keen to make their own multi-million-dollar, Group 1 mark on the industry:

“Don't follow the fashion, otherwise you'll be like a dog chasing its tail and never catch up;

“Get good advice that isn't linked to a stud or stallion– independent advice in this industry is very hard to come by, but it's the most valuable advice you can get;

“Ask questions all the time of people in the industry who are doing a good job and use that information to make up your own mind;

“You can never do enough research–racing stats don't lie. Look up a stallion you like in his third or fourth season, research the types he's thrown, the mares he's covered, his numbers to race and, before you sell yours, who's training them. Don't guess–research, and don't listen to gossip.”