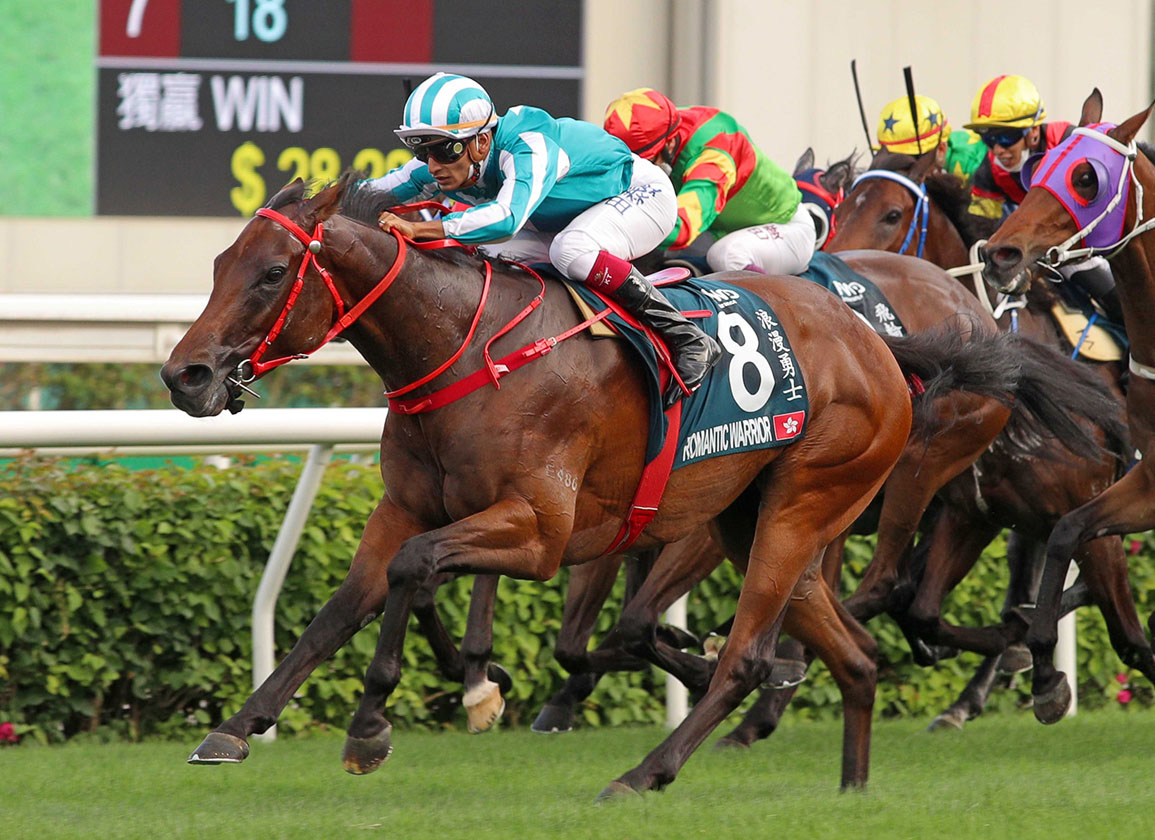 There were no surprises among the winners on Sunday's FWD Champions Day program at Sha Tin Racecourse, as the betting favourites in each of the afternoon's three Group 1 affairs each prevailed with a fair bit of authority. Fittingly, the winners will each take down year-end honours in their respective divisions, even as the award for Hong Kong Horse of the Year figures to remain an open and much-debated question for the next 2 1/2 months.

In one of the afternoon's biggest surprises, BMW Hong Kong Derby winner Romantic Warrior (Ire) (Acclamation {GB}) was crunched into $18 (4-5) favourtism as the gates loaded for the G1 FWD QE II Cup, but the once-beaten and relatively unexposed gelding proved more than equal to the task, storming home to score by two convincing lengths.

A touch keen around the first turn beneath Karis Teetan, who welcomed a baby girl into the world just this past Tuesday, Romantic Warrior settled better down the backstretch as he took up a midfield berth. Getting the jump 600 metres out on his chief market rival Russian Emperor (Ire) (Galileo {Ire})–who sat three wide without the benefit of cover for most of the second half of the race–the 300,000gns Tattersalls October yearling turned HK$4.8-million graduate of the Hong Kong International Sale launched his bid four deep at the top of the straight, took over a furlong from home and kicked on nicely to best Tourbillon Diamond (Aus) (Olympic Glory {Ire}) and last year's champion stayer Panfield (Chi) (Lookin At Lucky) in decisive fashion.

“It's been a great week with my little baby girl being born on Tuesday, so all my focus was going into her,” said Teetan, perenially among the top five riders in Hong Kong. “I was trying to be a daddy, but also put my focus into the racing.”

He added, “We had in mind that he's a bit younger than the other horses, but he's better than all of them and he proved what kind of horse he is today. [Trainer] Danny [Shum] and his team have done a great job.”

Of the four previous 4-year-olds to complete the Derby/QE II double–Vengeance of Rain (NZ), 2005; Ambitious Dragon (NZ), 2011; Designs On Rome (Ire), 2014; and Werther (NZ), 2016– only the first mentioned failed to be named Horse of the Year, due to the presence of the legendary Silent Witness (Aus).

Any lingering memories of consecutive losses earlier this season by reigning Horse of the Year Golden Sixty (Aus) (Medaglia d'Oro) have been well and truly washed away after the 6-year-old overpowered Derby runner-up California Spangle (Ire) (Starspangledbanner {Aus}) in Sunday's G1 FWD Champions Mile, his second straight win in the event. The winner's share of HK$11 million and change for his unprecedented 21st victory makes Golden Sixty the richest galloper in the history of Hong Kong racing, surpassing the previous mark held by Beauty Generation (NZ).

California Spangle, off as the heavily backed $26 (8-5) second favourite, was gunned to the front by Zac Purton, who gave the Goffs Orby grad every conceivable chance, rationing out a moderate tempo. But, as he demonstrated in his bounce-back success in the G2 Chairman's Trophy last time, Golden Sixty is capable of sitting handier to the speed while still managing a finish, and such was the case again Sunday, as Golden Sixty raced just a few lengths in arrears on the turn, lowered the boom on his younger rival with a bit less than a quarter-mile to travel and coasted in. California Spangle gamely held for second while no match for the winner.

“He did well,” jockey Vincent Ho said in what might be the understatement of the year. “He travelled comfortably and, actually, when Zac steadied the pace a little bit, he started to travel a bit keen, but he is strong enough and brave enough to push through that gap and run them down easily.”

After first panning the idea of an overseas trip owing to the ongoing pandemic, trainer Francis Lui indicated such a journey might be in the cards after all, with the June 5 G1 Yasuda Kinen around a left-handed one-turn mile at Tokyo the potential target.

“Yes, he is entered already but of course, we have to see how he recovers and we also need to see the quarantine, whether we can go and how the arrangements work. If everything is easy, we will go,” Lui said.

Bred on the same cross as American Grade I winners Elate and New Money Honey and on a similar cross to champions Rachel Alexandra (HOTY) and Songbird, Golden Sixty has a foal half-sister by Medaglia d'Oro's G1 Golden Slipper S.-winning son Vancouver (Aus). Gaudeamus was most recently bred to Wootton Bassett (GB) on an Oct. 26 cover.

The Pride of Hong Kong! 💙🤍💛 pic.twitter.com/mSuPUf5BOT

Trainer Richard Gibson was not lacking for confidence ahead of Sunday's G1 Chairman's Sprint Prize, and defending champion Wellington (Aus) (All Too Hard {Aus}) made it look all too easy with the softest of victories. Having won the G1 Queen's Silver Jubilee Cup and the G2 Sprint Cup in his two most recent appearances, the 5-year-old has all but locked up champion sprinter honours for the season.

One of the first to break the line, Wellington eased back into fifth position and he traveled with cover behind a good gallop up ahead. Traveling sweetly on the turn, he eased out four deep into the straight, descended on Computer Patch (Aus) (Exceed and Excel {Aus}) at the furlong grounds and edged clear. Sky Field (Aus) (Deep Field {Aus}), winner of the accident-marred G1 Longines Hong Kong Sprint, was home third just ahead of an unlucky Super Wealthy (Aus) (Epaulette {Aus}) in fourth.

“I've been pinching myself for the last three weeks,” Gibson said. “The horse was ready three weeks ago and I was waking up every morning and saying to myself 'what can go wrong?' It was all going far too smooth. I thought we had the best horse, so it was a matter of getting our plans right. His groom has such a wonderful relationship with the horse and we knew if we ticked the boxes today, he'd get the job done.”

“Covid changes every two weeks,” Gibson added. “It seems too difficult. We've had such a wonderful season and we've now got plenty of time to sit down with the owners and have a chat.”