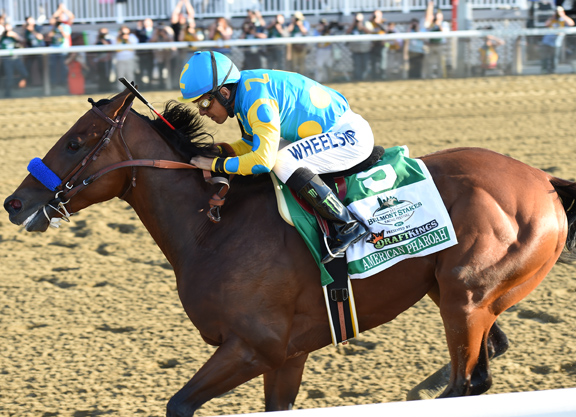 The terms `best’ and `favorite’ are typically two subjective concepts when it comes the Thoroughbred racehorse. The TDN’s Gary King reached out to key players from different facets of the industry to hear their thoughts. Email Gary King ([email protected]) to have your say.

CHRISTIE DEBERNARDIS, TDN
Over the past seven years at the TDN, I have been blessed to witness many of racing’s greats, which I thought would make it very difficult to choose just one. But, when given this assignment, there was one horse who immediately came to mind, American Pharoah (Pioneerof the Nile). Ending a 37-year Triple Crown drought, winning the GI Breeders’ Cup Classic and claiming championships at ages two and three, as well as Horse of the Year, his accomplishments alone make him more than worthy of this accolade. However, I chose him as the best I’ve seen for more than just his Hall of Fame-worthy triumphs.

When I first laid eyes on American Pharoah at Belmont, just days before he achieved immortality in the final leg of the Triple Crown, I was instantly struck by him. He just had this air about him, the look of eagles, as D. Wayne Lukas calls it. You knew as soon as you saw him he was special. It is not often a young Thoroughbred colt can be treated with the same ease as a Labrador Retriever, but American Pharoah was as calm, cool, and collected as they come. Watching him at work was equally impressive; he didn’t gallop over the track. He floated, with the type of movement every equestrian dreams of, but rarely sees.

I remember standing alongside my comrade Steve Sherack a few yards from the finish line, craning for a glimpse of the seemingly plain bay as he skipped over Big Sandy and crossed the finish line into the history books. We exchanged looks of exhilaration and shock as we watched the champion parade back to the winner’s circle. On the elevator back up to the press box, fellow turf writer Alicia Hughes and I were speechless, a rarity for us both, and all we could manage to say to each other was, ‘Did that really just happen?’

All of that makes American Pharoah the best myself, and many others, will ever see, as well as one of my favorites. A few of my other favorites (some I’ve seen and some I haven’t) are: Ruffian and Secretariat, who I spent most of my youth reading about; Silver Charm, for whom I fruitlessly rooted on my first trip to Belmont as a child; Smarty Jones, whose three Triple Crown races I witnessed live; La Verdad, who led me to some very important friendships; Wise Dan and Ben’s Cat, who I enjoyed rooting for alongside my dear friend Ben Massam; and Groupie Doll, who fellow TDNer Justina and I were big fans of, torturing our coworkers with our high-pitched cheers every time she ran.

Favorite: Street Sense (Street Cry {Ire}) was the first horse I really got behind and followed with regards American racing as he came along around the time I first came to the U.S. Known as the ‘curse breaker–history maker’, he was the first horse to win the Breeders’ Cup Juvenile and go on and win the Derby, and I had the privilege of being around him during my time at Jonabell selling nominations.

He was obviously a very talented racehorse and had this laid back, not a care in the world disposition. He’s just a neat horse that I’ve a special fondness for.

Best: Sea The Stars (Ire) (Cape Cross {Ire}). I’m sure I won’t be the only one to pick this guy but Sea The Stars was probably the most accomplished racehorse I’ve seen. His 3-year-old campaign was incredible, to win the 2000 Guineas, the Epsom Derby and then step up and beat the top older horses in his remaining starts all at Group 1 level was an extremely difficult feat.

He quite simply shouldn’t have been able to do what he did in the Prix de l’Arc de Triomphe. He was quite free early on and got boxed in in the straight, but was just so much better than the competition that in the end you were left thinking he could have won regardless of how the race was run. His connections also make it such a good story. John Oxx and Mick Kinane are quite simply the best at what they do and given all their success remained so humble and grateful–two pillars of our sport.

Favorite & Best: My favorite horse of all time is Native Dancer (Polynesian), who may also have been the best. It wouldn’t happen now but to think he was an unbeaten Champion at two (Horse of the Year in some corners), Champion 3-year-old, Champion older horse, again Horse of the Year. He lost only one race [1953 GI Kentucky Derby], of course the one that matters most in 22 starts.

Imagine if he had won? He would be an unbeaten Champion 2-year-old, Triple Crown winner, etc. As a stallion he gave us the Mr Prospector line thru Raise a Native. And, to top it all off, he’s the broodmare sire of Northern Dancer (Can)!