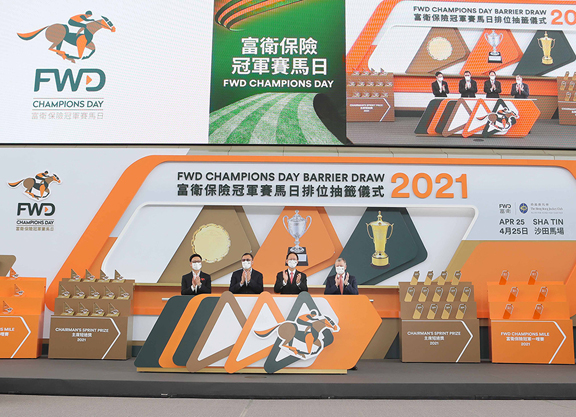 Barriers were drawn Thursday morning in the Sha Tin parade ring for Sunday's FWD Champions Day meeting, featuring a trio of Group 1 events worth a combined HK$63 million (about US$8.1 million).

Golden Sixty (Aus) (Medaglia d'Oro) is perfectly drawn for his get-back, run-on style that has seen him greet the judge on no fewer than 13 straight occasions, including the G1 Longines Hong Kong Mile and G1 Stewards' Cup in his two most recent trips at the 1600 metres. He faces just five others in the G1 FWD Champions Mile (HKJC form), chief among them Southern Legend (Aus) (Not A Single Doubt {Aus}), who took down the colours of Beauty Generation (NZ) (Road to Rock {Aus}) 12 months ago.

“It's only a small field and with luck in running, I believe Southern Legend can run very well again,” jockey Karis Teetan said at the draw. “He always gives his best.”

Danon Smash (Jpn) (Lord Kanaloa {Jpn}) returns to the scene of his 21-1 upset of the G1 Longines Hong Kong Sprint last December, and if anything, faces a weaker field on paper. Whereas he drew widest of the 14 in the Sprint, he has a cosier alley and Sunday will take all the beating in the G1 Chairman's Sprint Prize (HKJC form) with Joao Moreira taking the ride.

“Just after he won the Hong Kong Sprint last December, we decided to come to Hong Kong in April,” trainer Takayuki Yasuda said. “After the Chairman's Sprint Prize, Danon Smash will take a rest. The next target would be the [G1] Sprinters S. then after that, I want to come to Hong Kong again for the international races.”

A four-pronged Japanese attack on the G1 FWD QE II Cup (HKJC form)–won by Japanese raiders in three of the last nine runnings–could be reduced to three, as 2019 G1 Longines Hong Kong Vase (2400mT) hero Glory Vase (Jpn) (Deep Impact {Jpn}) was found to be lame Thursday morning and is subject to subsequent examination. Loves Only You (Jpn) (Deep Impact {Jpn}) could go favoured off her tough third to Mishriff (Ire) (Make Believe {GB}) in the G1 Dubai Sheema Classic (2410mT) last month and will have every chance from gate five. Her toughest competition could come in the form of Japanese Fillies Triple Crown winner Daring Tact (Jpn) (Epiphaneia {Jpn}), gate 1), while defending champ and reigning Horse of the Year Exultant (Ire) (Teofilo {Ire}), gate 2) is also in the mix on his best.