Fast But Controversial, Lucy N Ethel Turned Over to Amoss 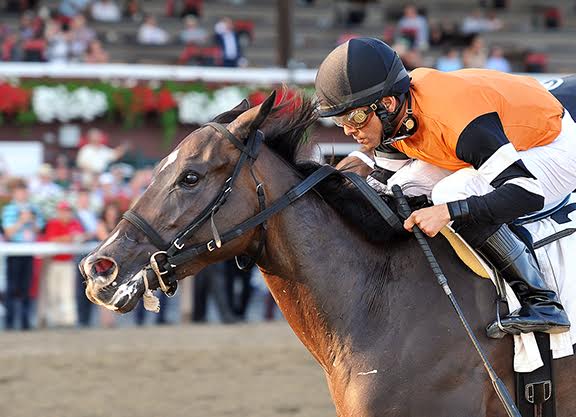 Lucy N Ethel (During), an undefeated filly who won the GII Prioress at Saratoga in her last start, has bene turned over to trainer Tom Amoss.

By moving the horse to Amoss, her owners, Jettany Thoroughbred Corp & J.A.G. Racing, Inc. may have quieted a controversy that surrounded the horse over the last few months as to who her real trainer was.

Lucy N Ethel won her first there starts, including the GIII Old Hat S. at Gulfstream on Jan. 2, while racing for trainer Ramon Preciado. Following that race, Lucy N Ethel was sidelined to have chips removed from an ankle. In April, Preciado, who was in the midst of fighting a 270-day suspension for numerous clenbuterol overages, was banned by Parx officials due to repeated offenses. But Preciado's lawyer successfully got a restraining order against Parx, which began taking his entries again shortly after the original ban began.

However, Preciado did not have a New Jersey trainer's license, which became an issue when Lucy N Ethel was entered in the Aug. 14 Blue Sparkler S. at Monmouth Park. According to New Jersey Racing Commission Executive Director Frank Zanzuccki, Preciado called the Monmouth racing office asking whether he would be permitted to run the horse in his name in the race. He was told he was not eligible to race and that it could take up to a year before they would determine whether or not he would be given a license. According to Zanzuccki, Preciado personally called later that day, told the office to enter the horse and put her in the name of his assistant Chloe Bradley. The Monmouth racing office and stewards looked into the matter and concluded that Preciado, and not Bradley, was the actual trainer. Bradley subsequently scratched the horse on her accord.

Bradley told racing officials the filly was stabled at Westhampton Farms Thoroughbred Training Center in Westhampton, N.J., where Bradley did in fact have stalls. But all the horses works were at Parx, where Preciado is based.

“In our investigation, Chloe Bradley told us the farm's track was not suitable for workouts so she would bring the horse to Parx to work,” Zanzuccki said. “We checked the long in and log out sheets at the stable gate and there were no ins and outs for this horse. Our belief is the horse never left Philly.”

Zanzuccki said they also found veterinarian records that show the horse was treated by a veterinarian at Parx they day before the Blue Sparkler.

After the Blue Sparkler, the filly was then sent to Saratoga and again entered under Bradley's name for the Prioress on Sept. 4, which she won.

Shortly after the Prioress, the Monmouth Park board of stewards suspended Bradley for 45 days for entering a horse they allege she did not actually train. Once that suspension was issued, New York racing officials would not accept the entry of Lucy N Ethel in last Saturday's GII Gallant Bloom Handicap, citing an on-going investigation into who actually was training the horse.

Steve Perry, a co-owner of Lucy N Ethel, said the decision to send the horse to Amoss was made primarily because they wanted a Kentucky-based trainer to take over the handling of the horse because they are pointing her for the Oct. 22 GII Lexus Raven Run at Keeneland.

“This is the best thing for the horse,” he said. “Tom is the right kind of guy for the situation for our filly and we love his program. It's not that we're pushing anybody out. We were going to do this before everything blew up.”

But Perry did admit that by transferring the horse to Amoss, the stable will be avoiding some obvious headaches.

“It was time to move on,” he said. “Nobody did anything wrong and we were getting so much heat from the press and the stewards. Chloe was the assistant trainer and she took care of this horse the whole time she was in Florida. When she came back from Ocala where she was recuperating we gave her to Chloe to train. They says Chloe was just a 'paper' trainer and that's not true. She's getting railroaded. She's been around this horse much more so than anybody.”