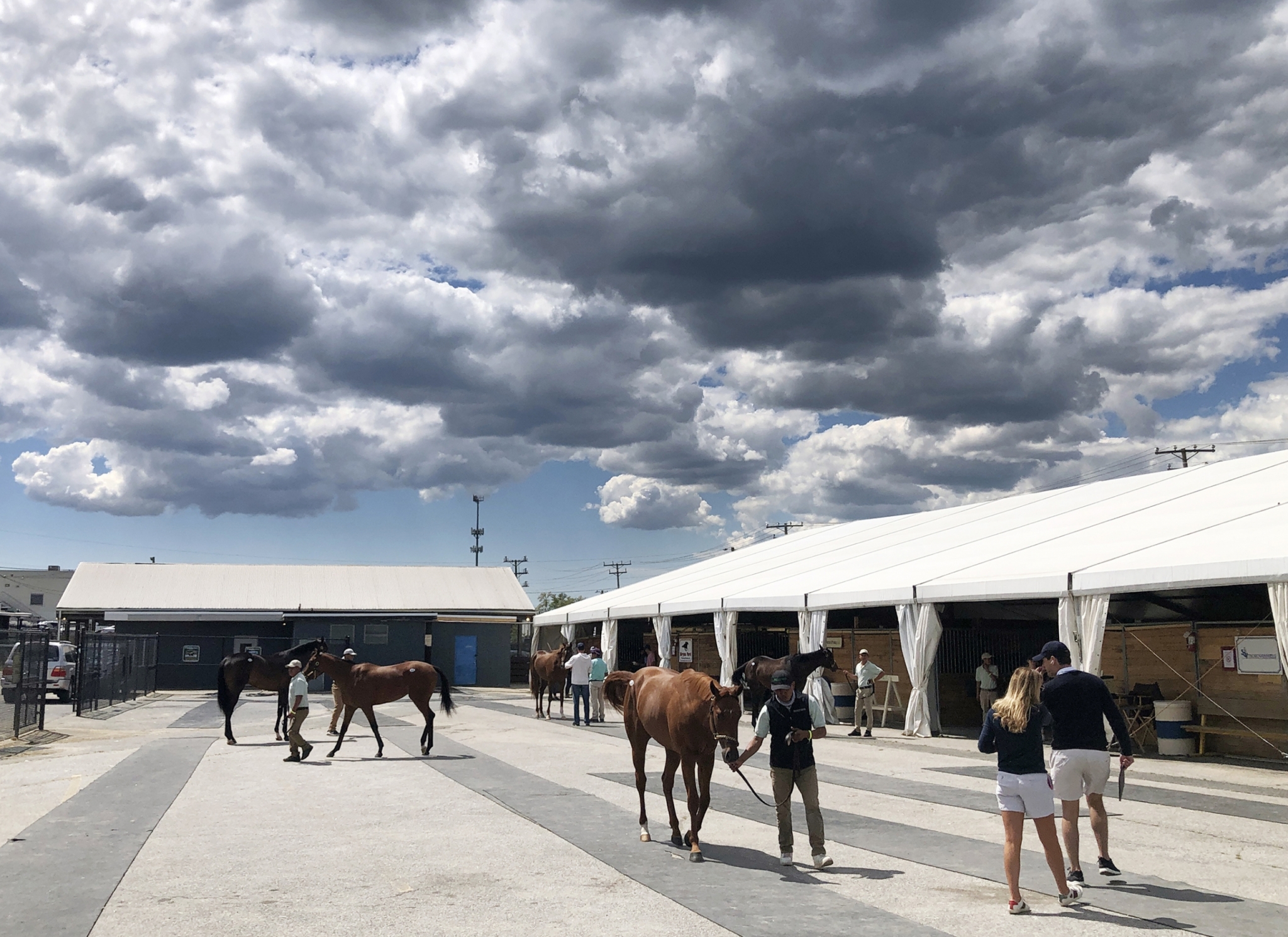 TIMONIUM, MD – The Fasig-Tipton Midlantic 2-Year-Olds in Training Sale, which was pushed back to late June in 2020 due to the pandemic, returns to its traditional mid-May spot on the calendar with bidding at the first of two sessions getting underway at 11 a.m. Monday at the Maryland State Fairgrounds.

“We are very optimistic about the sale,” Fasig Midlantic Sales Director Paget Bennett said at the sales barns Sunday morning. “We have a great group of horses here and there is a lot of interest. We were very busy on Friday and that's a good sign. Every day we have more people and different people coming to look. I think that tells us there is a lot of interest. We will find out at 11 a.m. tomorrow.”

Randy Miles's annual consignment in Timonium is a homecoming of sorts for the Virginia native and the horseman is looking for a strong market this week.

Miles continued, “People love to come up here this time of year. You can't beat this weather and it's a fun place. I love coming here. I have heard a lot of people say, 'This is the first time I've been here.' Like [bloodstock agent] Kerri Radcliffe. She is here for the first time and she said this is the coolest place.”

“People have a lot of confidence in the dirt track,” Miles said. “If you sit up there and watch the breezes, you can see the good ones separate themselves. So it's easier on the buyers. And you want someone who is going to spend $300,000 on a horse to get what they thought they were buying.”

Prospective buyers were out in force on a sunny, picture-perfect morning in Timonium Sunday.

“It's been really good,” Wavertree Stable's Ciaran Dunne said of action at the barns. “We have probably had more activity than we have had in years past. A lot of new faces which is kind of fun and interesting. We have 11 horses, but the views are spread evenly through them.”

Dunne continued, “I think it will be a very good sale. This has historically always been a market where you could move them from $5,000 to $500,000 and I don't see that changing. I think something else that helps is that it's sort of a last stop for all of us and people are realistic with their reserves to move horses along. I think people know that coming in, so they are confident in bidding that they have a chance.”

The Maryland State Fairgrounds is within easy driving distance of several racetracks, which makes the Midlantic auction a must-attend for trainers in nearby racing jurisdictions.

“We will see more trainers here than we will see at any of the other 2-year-old sales,” Dunne said.

Demand for juveniles was high throughout the market at the season's first three major auctions and consignors look for that trend to continue in Maryland.

“The first three sales we've been to have been unbelievable with buyers' attendance and clearance rates and everything,” said Top Line Sales' Jimbo Gladwell. “I don't see any reason for this sale to slow down. I think if your horse works good and vets good, you're going to see a very active market.”

For many consignors, the Midlantic auction is the next stop after a record-setting OBS April sale last month.

“I was surprised by the depth at OBS,” Dunne admitted. “I thought with the loss of the Koreans we would really struggle with that lower and middle tier of the market. They had a limit to what they would spend, but they pushed everybody else up a jump or two. And with the volume that they bought, I thought it would have a detrimental effect, but I was surprised that that part of the market really didn't suffer.”

Consignor Bobby Dodd is taking a cautious wait-and-see approach to the market in Timonium.

Donato Lanni, bidding on behalf of Michael Lund Petersen, made the auction's highest bid when going to $1.1 million to acquire a colt by Uncle Mo from Pike Racing.

The Midlantic sale continues with a second and final session Tuesday, also beginning at 11 a.m.