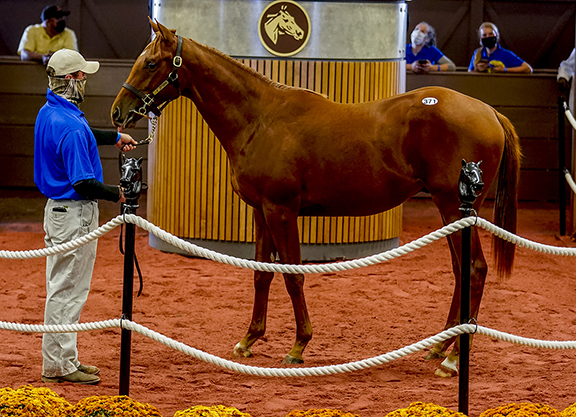 TIMONIUM, MD – With action building throughout the day, the Fasig-Tipton Midlantic Fall Yearlings Sale concluded with a bevy of six-figure transactions Tuesday and statistics nearly on par with the 2019 auction in Timonium.

“Overall, it was a very, very solid sale statistically,” Fasig-Tipton President Boyd Browning, Jr. said at the close of business Tuesday evening. “The average is virtually identical to last year and the median is identical to last year. The RNA rate overall is just slightly over 20%. The gross is up significantly because of the bigger catalogue. Under the circumstances with COVID-19 and its impact on 2020, we’d have to say the sale was a tremendous success in terms of being able to accomplish similar results to last year and it was a pretty good year last year. We have been able to maintain the status quo, which I think is a win in the world we are living in right now.”

A colt by Gun Runner attracted the 2020 auction’s highest bid when selling Tuesday for $270,000 to Danzel Brendemuehl and Robert Lambe. The yearling was consigned by Becky Davis.

“I think it’s like a lot of the sales recently,” Davis said of the market in Timonium. “The really top horses are going to bring the prices and the middle horses are going to suffer. I have some middle horses that suffered, but I have also been pleasantly surprised with a couple of the prices, too. I had some that didn’t get a whole lot of action who sold well to local people and then these couple of strong Kentucky sires got everyone on them.”

“The market is still not easy. When there is a median of $14,000, nobody who sells a horse for $14,000 or less is making any money, we all know that,” Browning said. “But it’s not significantly different, if much different at all, from this marketplace last year.”

Browning said the middle market seems to have been less affected by the polarization in sales results.

“The later books at Keeneland seemed to have a little more feel of 2019 than the earlier books,” Browning said. “And we have seen it in some of the other regional markets that have held up reasonably well. There is still polarization, but the gap because of the polarization and the diminishing of a few major buyers is certainly a lot less when the top is $250,000 or $300,000. But all in all, we were very encouraged with the results. It was something to continue to build on in this marketplace, for both the yearling and 2-year-old sales, and for the overall marketplace.”

A colt from the first crop of champion Gun Runner will be targeted at next year’s Fasig-Tipton Gulfstream sale after Danzel Brendemuehl, bidding out back alongside Robert Lambe, signed the ticket at $270,000 to acquire the chestnut yearling (hip 371)  Tuesday in Timonium.

“We saw him yesterday early and as soon as we saw him, we knew we wanted him,” Brendemuehl said. “We knew we were going to have to stretch.”

The yearling is out of Stormy Tak (Stormy Atlantic), a daughter of multiple Grade I winner Lady Tak (Mutakddim) and a half-sister to the dam of this year’s GI Alfred G. Vanderbilt H. winner Volatile (Violence). He was consigned by Becky Davis on behalf of breeder Jon Marshall, who purchased Stormy Tak for $90,000 at the 2018 Fasig-Tipton February sale.

“We are extremely happy with that result,” said Davis. “We didn’t have a reserve. This is a new client for me, so it’s nice to have a new client do that well. We were hoping to get around $50,000, but Gun Runner has jumped up and there was a lot of hype about him. He’s a super athletic horse, so he caught a lot of attention. He really got on everybody’s short list because of the way he was showing himself.”

Of the yearling’s appeal, Brendemuehl said, “He looks fast and he’s a Gun Runner. We loved him and all day we’ve been waiting for him. We were going to buy the Nyquist (hip 21) privately when he was bought back [Monday], but we knew we had to wait for this one. We saved our bullets. He’ll go to the Miami sale and we’ll see what happens.”

Through Davis’s consignment, Marshall offered a filly by Gun Runner later in Tuesday’s session, but the Pennsylvania-based breeder bought the filly (hip 553) back on a final bid of $250,000.

Beaver Gets His Flatter Colt

Nick Beaver of Bell Gable Stables came to the Midlantic Fall sale with his eye on one horse and the Maryland breeder came away with the colt, a son of Flatter, for $250,000 Tuesday in Timonium.

“We came specifically for this horse and he’s the only one we bid on,” Beaver said after signing the ticket on hip 451. “I think he was the best horse in the sale.”

The yearling, bred by Richard Golden’s Sycamore Hall Thoroughbreds, is out of Apple Cider (More Than Ready). Out of multiple graded winner Who Did It and Run (Polish Numbers), the mare is a half-sister to multiple stakes winner and graded placed Giant Run (Giant’s Causeway). The colt was consigned by Northview Stallion Station.

“My wife [Delora] and I have had our eye on him for a couple weeks now,” Beaver said of the yearling. “We know the guys at Northview very well. We live in Chesapeake City, we actually live right next door to Northview Stallions, so we are one big family.”

Of the yearling’s final price, Beaver said, “I wasn’t surprised, especially after seeing how many people had looked at him. He was showing well back there.”

The yearling’s half-sister by Twirling Candy was purchased by bloodstock agent Dennis O’Neill for $270,000 at this year’s Fasig-Tipton Midlantic 2-Year-Olds in Training Sale.

Bell Gable Stable has about 19 horses in training, as well as six broodmares. Plans for the operation’s newest acquisition are still to be determined.

“We are going to send him to Delaware initially to get him Delaware-certified,” Beaver said. “We’ll keep him in the Midtlantic and from there, we’re not sure yet. Obviously, he is Maryland-bred, but not Maryland-sired, so he has a lot of different things we can do with him.”

“It was quite a team effort picking him out,” West said. “[Repole bloodstock advisors] Eddie Rosen and Jim Martin and [Viola’s St Elias advisor] Rory Babich, we all loved him. Mike and Vinnie got behind us and let us do our job and we secured what we think is a beautiful-looking colt. He has a Classic pedigree and that’s what they are looking for.”

Bred by the late Robert Manfuso and Katherine Voss and consigned by Voss’s Chanceland Farm, the bay colt is out of Tanca (Polish Numbers) and is a half-brother to stakes winners Cordmaker (Curlin), Las Setas (Seville {Ger}) and Corvus (Dance with Ravens).

West has been walking the Midlantic sales grounds for the last few days, but was making his first purchase when signing for hip 383.

“We traveled all the way to Maryland to buy him,” West said. “This is the first one I bought. We bid on some New York-breds earlier and in fairness they were pretty strong. We had numbers in our mind and they went past those numbers. So we saved our pennies for this one.”

Repole and Viola partnered to purchase 15 yearlings for $6,380,000 at the Keeneland September sale and a further two at the Fasig-Tipton Selected Yearlings Showcase.

“They are taking advantage of a market that might be a little bit soft,” West said. “They and their families are diehard fans of the game and they want to be supportive of the game. We got outbid on more horses than we bought in September, so they supported the market tremendously and we bid on a couple earlier in this sale and got outrun. They are good supporters of the game.”

Crow Makes Most of Maryland Trip

During the early weeks of October in recent years, Liz Crow has been shopping at the Tattersalls October Yearling Sale, but with travel restrictions in place due to the global pandemic, the bloodstock agent skipped the English trip and was busy buying in Timonium this week instead. Crow made her highest purchase of the two-day Midlantic Fall Yearling Sale going to $135,000 to acquire a filly by Declaration of War (hip 265) from the Paramount Sales consignment Tuesday.

“She will go to the races,” Crow said of the yearling. “I don’t know where yet, but Paul Sharp is going to break her. I thought she was a really pretty filly with a nice page. There aren’t a lot like that here. I thought she stood out.”

Bred in Pennsylvania by Equivine Farm, the dark bay filly is out of Newstouse (Unbridled’s Song) and is a half-sister to multiple stakes winner Newstome (Goldencents).

Crow signed the ticket on five yearlings at the two-day Midlantic auction for a total of $310,000.

“I am usually at Tattersalls and I’m really sad not to be there, but I thought with the quarantine situation with COVID it would just be too hard to get over there,” Crow explained. “So, I am here instead. There are some nice horses here and we are getting some stuff bought for some clients to race regionally.”

Of the market in Maryland, Crow added, “It’s competitive for the right horses. There are definitely some bargain opportunities here, but I think the really nice horses are bringing plenty of money.”