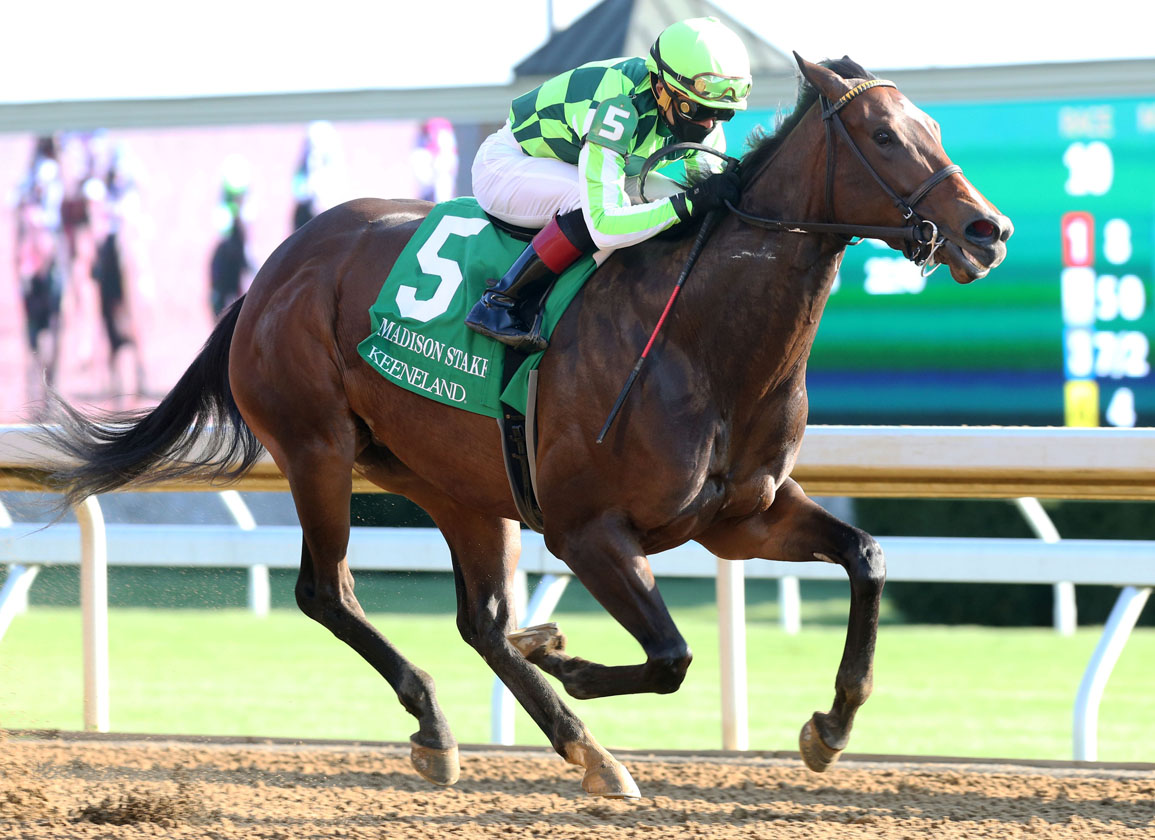 The 2021 yearling season kicks off with Fasig-Tipton's July Sale Tuesday at the Newtown Paddocks in Lexington, Kentucky. With just under 350 yearlings cataloged for the single-session auction, the July sale, which had swelled to as many as 550-600 horses over a decade ago, appears to have found its sweet spot–both in volume and the type of offerings–in recent times. Due to the COVID-19 outbreak, the July Sale was cancelled last season, with the horses merged into the re-routed Saratoga Select and NY-bred sales held in Kentucky in September.

“It is very similar with previous years in terms of size,” said President and CEO Fasig-Tipton Boyd Browning, Jr. “Also, the July sale certainly has a niche. The market really knows what to expect in July, both buyers and sellers alike. It is very important for us in a marketplace to have consistency and that our buyers and sellers both know what to expect when they come onto the sales grounds in July and we will continue to build on that again in 2021.”

One of the changes from the past few editions, the July sale will see the return of the 'Freshman Sires Showcase' session, which heads Tuesday's bidding action.

“We've always had a lot of young stallions represented at this sale and that will be the case again this year, however, after several years of absence, we brought back the Freshman Sire Showcase,” said Browning. “There is a group of yearlings by freshman crop sires, who overall, are quite exciting.”

When asked why a formal session dedicated to first-season sires was shelved for a few years before returning for the 2021 renewal, Browning explained, “As the market evolved, it had shifted for a little while where being 'new' or 'unproven' was not popular and not in vogue around 2009-11. [In recent times] we have seen tremendous success on the racetrack and in the sales ring by horses by these younger sires and we thought it was an opportune time to bring back this showcase, which was so popular for so many years.”

Although the younger sires will head the action Tuesday, the elder statesmen of the game also enjoy ample representation in this year's catalog.

“We also have a tremendous group of yearlings by proven stallions, some of the best stallions in the world,” he added. “I think we have a very good combination of a very well-balanced catalog and most importantly, we have a group of physicals that we love.”

And while the stallion representation remains diverse, the foundation that the sale has built its reputation on since the early days when Triple Crown hero Seattle Slew–by Bold Reasoning, who was relatively unproven at the time–was secured for a mere $17,500 in 1975 remains largely unchanged.

“The July sale has built its reputation for over 40 years of being a great place to showcase an early, precocious, mature, athletic individual,” Browning said. “I think we have a catalog full of those types of physicals here. We are very pleased with the overall group of physicals for the sale this year.”

While serving as a launching point for yearling sales season, the July sale also fulfills a need for breeders and sellers looking for an appropriate spot to bring their yearlings to market.

“I think this sale sets a tone,” offered Browning. “I think the most important thing about the yearling sales in particular is that horses mature and thrive at different times. Throughout the foaling season, we will have foals born from January through June and there are certain times on the calendar which suit certain horses better than others. What we are trying to do is to give sellers and breeders the opportunity to maximize the opportunity with their horse. That is to sell when he or she is going to be at its best, for itself, but also within its peer group that it's competing against. Not every horse matures, prospers or thrives at the same time. So, it's important to have multiple options and venues for sellers.”

Echoing that sentiment, Brookdale's Joe Seitz, offering horses in both the yearling and HORA portions of the July sale, said, “The July sale is timed really well because it allows anybody who wants to buy something to campaign in the summer and fall, so it hits the calendar just right. And it seems to be growing every year. We have had some fun offering horses out here over the past few years. We're already out here with yearlings, so it makes sense to bring horses of racing age as well. It's a model that works very well for us.”