Fasig-Tipton Gets Back to Business at Gulfstream 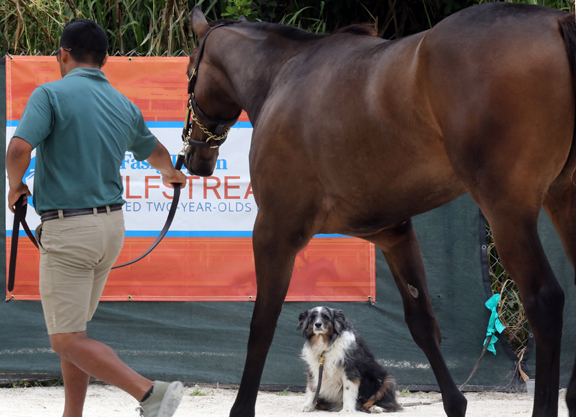 HALLANDALE BEACH, FL – A day after watching the horses perform on the racetrack, buyers were out in full force at the sales barns Tuesday in preparation for the return of the Fasig-Tipton Gulfstream Sale of Selected 2-Year-Olds in Training, which will be held in the track's paddock Wednesday. Under late-morning overcast skies and windy conditions, trainer Bob Baffert and bloodstock agent Donato Lanni were making the rounds at the sales barns, as were fellow Southern California conditioners Simon Callaghan and Paddy Gallagher. The local training bench was represented by Chad Brown, Graham Motion, Shug McGaughey and Todd Pletcher. Saudi businessman Amr Zedan, who will watch his Medina Spirit (Protonico) go postward in Saturday's GI Santa Anita Derby, hit the barns along with racing manager Gary Young, and Michael Tabor and the Coolmore team were among the throng of studious shoppers as well.

Consignors were kept busy showing the 136 horses expected to go through the ring Wednesday when bidding begins at 2 p.m.

“This is the first time I sat down since 8 a.m.,” Steve Venosa of SGV Thoroughbreds said shortly after noon Tuesday as his popular colt by Nyquist (hip 146) headed out for another showing. “That one horse there has probably been out all morning. They've all been out. It hasn't let up yet. Everybody is here.”

Fasig-Tipton was forced to cancel its 2020 renewal of the Gulfstream sale due to the pandemic and consignors and buyers both seemed pleased to be back in South Florida for the boutique auction.

“It is good to be back out here,” Venosa said. “Last year was an odd year for everyone. Just to get back here and see all of the activity, it's very refreshing. We are really looking forward to a good sale.”

A few consignments up the row, Dean de Renzo of Hartley/de Renzo Thoroughbreds was also taking advantage of a brief interlude between showings of the operation's popular Gun Runner colt (hip 181).

“We have one of the top horses in the sale, so they usually take a lot of time,” de Renzo said as the handsome chestnut once again headed out of the barn. “He's been out all day. But it feels good to be back here after missing last year.”

DeRenzo and partner Randy Hartley purchased hip 181 for $140,000 at last year's Fasig-Tipton October sale and he worked a furlong in :10 1/5 during Monday's under-tack preview.

“We bought that horse kind of just on a gut feeling in the back ring,” de Renzo recalled. “We loved him then and thought we had bought a really nice horse. And he's had a great year for us training and here, under pretty tough conditions, he just came through it all. We knew it coming in that he would, but after seeing that first part of the racetrack, we thought maybe this isn't the place we should be. I guess good horses can get through things.”

“We only have three, but they all performed well considering the conditions we had with the heat, deep racetrack and wind,” de Renzo said. “But that's what I do like about the dirt and breezing on the dirt, when they do get through it, people know that's the horse and then it turns out to be the right horse. We like that because if we have a horse that really performs well, but he's not the right horse, it looks bad on us. We're happy to be here.”

Of expectations heading into the sale, de Renzo said, “I think the sale is going to be strong. I think there are a lot of really nice horses here. After a year off, I think people have settled down a little more about the pandemic, there is more of a comfort zone. So I have good expectations that the sale is going to be what it was two years ago.”

Eddie Woods was the leading consignor at the juvenile sales season's first auction, the OBS March Sale, and the Irishman was seeing similar action at the Gulfstream barns.

“It's been very busy,” Woods said. “It's just backing off a little now. But we've seen everyone and they've been working hard. It just has a good feel to the whole thing, a bit like the March sale. Maybe not as many people as in the March sale, but there aren't as many horses to go around either.”

Woods continued, “The expectations are high here. Fasig has been very high on how the sale has been received by their customers and I'm sure with the credit applications. And we will see what happens.”

Tristan de Meric of de Meric Sales admitted he was one of many consignors who had been surprised by the strength of the market last month in Ocala. He said he hopes the momentum only builds from there.

“I was definitely pleasantly surprised by the market at OBS,” de Meric said. “We sold 26 out of 26 horses that we led to the ring. It was a great sale. I can't complain about that. And if the year can build off of that, like it has historically, hopefully we are in for a fun season. For the right ones anyway.”

After a year of uncertainties and frustrations, buyers are ready to move forward, observed Clovis Crane of Crane Thoroughbred Services.

“All of the buyers are here, so all of the stars are aligned for a huge sale,” Crane said. “If you have good horses, they are going to buy them, it's pretty apparent.”