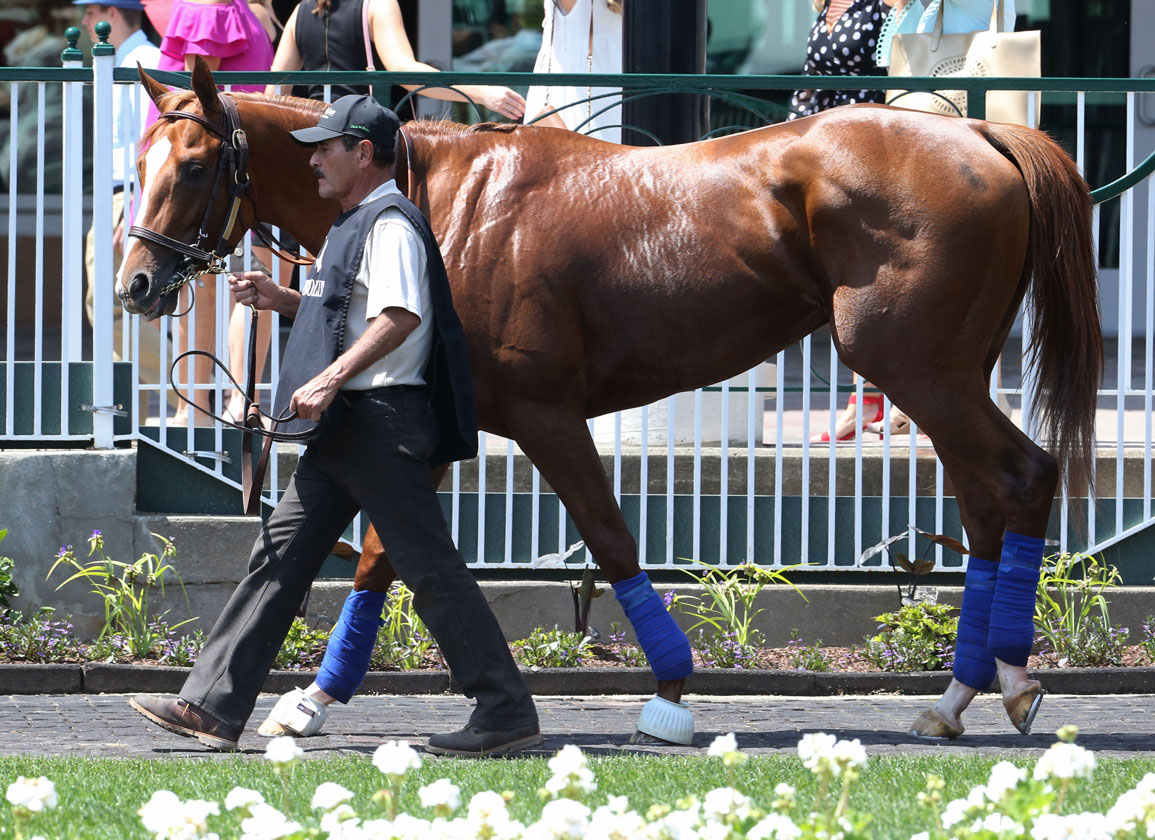 The Fasig-Tipton Saratoga Fall Sale of breeding stock returns Monday after a one-year hiatus due to the pandemic. A catalogue of 292 broodmares and broodmare prospects and New York-bred weanlings will be on offer at the Humphrey S. Finney Pavilion beginning at 10:00 a.m.

This year, another freshman stallion could feature prominently on the results sheet, as first foals from buzzed-about McMahon of Saratoga resident Solomini come to auction. The son of Curlin has 19 weanlings catalogued, plus another five mares in foal to him on offer.

A $270,000 KEESEP yearling, Solomini was a debut winner at Del Mar for Bob Baffert before runner-up finishes in the 2017 GI FrontRunner S. and GI Breeders' Cup Juvenile, book-ended by now in-demand Kentucky-based stallions Good Magic (Curlin) and Bolt d'Oro (Medaglia d'Oro). He crossed the wire first in the GI Cash Call Futurity the following month, only to be controversially placed third by the stewards behind stablemate McKinzie (Street Sense). Solomini was second in the GII Rebel S. and third in the GI Arkansas S. on the Triple Crown trail in 2018, and after amassing $834,993 from 16 career starts, was acquired for stud duties ahead of the 2020 season by a group led by Joe and Anne McMahon's McMahon of Saratoga Thoroughbreds, Raymond DeStefano and Chris Bernhard.

Solomini has led all New York-based stallions by mares bred in both of his first two seasons at stud, covering 123 mares this past season–eight more than barnmate and the Empire State's top sire, Central Banker.

“They appear to be pretty consistently correct, good-looking babies and well balanced. They're also pretty mature looking,” said Joe McMahon of Solomini's produce. “I would think that, with his race record and the fact that he's a Curlin, who's doing so incredibly well this year, that there will be above-average interest in them.”

In addition to standing Central Banker, McMahon was also part of the syndicate that owned another recent New York success story in Laoban. The 2016 GII Jim Dandy S. upsetter was relocated from Sequel Stallions to WinStar Farm ahead of the 2021 breeding season after leading all New York freshmen last year and finishing second among North American stallions thanks to the exploits of GI Darley Alcibiades S. winner Simply Ravishing and GII Kentucky Jockey Club S. winner Keepmeinmind. Laoban died unexpectedly in late May.

There are 12 Central Bankers in the catalogue (plus 10 more in foal to him), and eight Laobans.

“Looking back at Laoban, he was hard to sell seasons to early on,” McMahon said when asked to compare the reception for Solomini thus far to Laoban and Central Banker at this same stage in their careers. “He never got the support that Central Banker or Solomini have gotten. We owned a significant part of him, so we were pretty close to the situation and what was going on with him… The Central Bankers were popular from the get-go. Then they came out running, and we kept good books going to him, so he was able to kind of avoid the slump that a lot of stallions have in their third year. We'd love for Solomini to be as successful as either one of those two, that's for sure.”

The Saratoga Fall sale comes on the heels and in the midst of an extremely competitive yearling sales season, including very strong trade at Fasig's New York-bred Yearlings sale here in August and at the recently concluded Midlantic Fall Yearlings sale, which is heavy on New York-breds.

“If you look at the popularity of New York-breds, relative to the amount of purse money that's available, you've got to think that this is a good investment for people, and a good hedge for people who want to be in the breeding business; with these purses being so high and the amount of racing we have in New York. Those are very positive things,” McMahon said. “I think in the economy we have now, and in the sales economy right now where the highs are so, so high… It's still hard to sell a middle-priced horse, but I think the New York-bred program gives people a great edge because of the awards and the purses. I think the market [at Saratoga] is likely to be pretty good.”