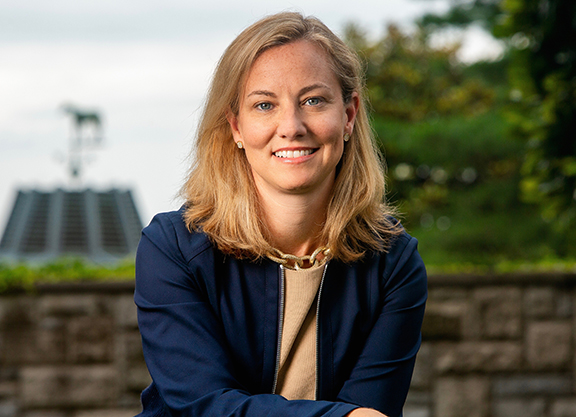 Keeneland's President-elect Shannon Arvin speaks on the deep family ties that connect her to Keeneland. | Keeneland

The last few weeks have been a series of 'firsts' for Shannon Bishop Arvin. Named Keeneland's President-elect on Sept. 1, she will officially transition to President and CEO once the calendar turns to 2021, and in doing so, become the first woman to take on the position at the storied racetrack.

Arvin's first weeks on the job have been a unique situation to navigate, to put it mildly, but the trailblazer has taken it in stride. For her, family legacies have propelled her through these uncharted waters.

She spoke on the legacies she hopes to carry on in the new position.

“Hard work is definitely one, as well as perseverance,” Arvin said. “Things aren't always easy-especially in this business, especially in the middle of a pandemic. But I think we have to continue to work to make the best decisions we can with the facts we have and make those decisions for the right reasons. The other big legacy is integrity. It's doing the right thing for the right reasons. That's not always easy and it's not always popular, but it's important.”

Arvin's family ties go back to Keeneland's inception– when her grandfather, W.T. “Bish” Bishop, was the track's first General Manager upon its opening in 1936.

“My grandfather passed away when I was in high school,” she recalled. “But I have a lot of great memories with my grandparents at Keeneland as well as at Oaklawn Park, which is another great track that was really important to my grandfather.”

Her father, William T. “Buddy” Bishop III, grew up roaming the Keeneland grounds when his family lived in what is now the administrative offices.

“My mom remembers coming out here for Christmas and recalls where the tree was set up,” Arvin said. “My dad grew up playing on these grounds, which is such a special connection. The place has always been so important to my dad. I'd say that a calling of his life was to do what was right for Keeneland.”

Growing up in Lexington, Arvin learned to appreciate the culture of Central Kentucky, while gaining essential connections within the horse community.

“My first experience at Keeneland came in working the switchboard in the general offices,” she explained. “I got to know a lot of people that are still here today through that experience. Rogers Beasley, Geoffrey Russell, Nick Nicholson and Ted Bassett, I've grown up knowing these people.”

Arvin attended the University of North Carolina, Chapel Hill, before working a stint in Washington, D.C. She then returned home and graduated from the University of Kentucky's College of Law in 2002. From there, she took on the roll of partner at SKO, working alongside her father until his passing in 2008.

While practicing, she has represented many prominent industry participants and has served as corporate counsel to Keeneland since 2008 and as Secretary and Advisory Member of Keeneland's Board of Directors since 2015.

Arvin recalled the relationships that she developed while working with her father.

“I got to practice with my dad for seven years before he passed away, which was a great experience,” she said. “It's funny, Geoffrey [Russell] tells a story that the one time he offended my dad was when he called him an attorney instead of a counselor. I've tried to follow that role in being a trusted advisor.”

Backed by her two daughters and husband, Arvin said that in many ways, the transition into her new role has felt very natural.

“I think my professional life and my personal life has always been so tied together,” she said. “I'm really fortunate about that. It's those relationships that you build. Certainly a lot of people have told me that my dad would be so proud, and I hope so.”

Keeneland and Arvin will be back in the spotlight with the start of the October race meet followed by the second running of the Breeders' Cup at the Lexington location.

Going forward, Arvin said that the organization hopes to highlight the iconic track's many traditions while searching for new methods to evolve the company and the sport.

“Our tradition is what makes us great,” she said. “We have to be sure that we build on that tradition in the right ways, but at the same time find ways to innovate and draw more fans to the sport and also be committed to safety and integrity. We've been committed to that really since 1935, as that's part of being a model racetrack. But there's more technology and science available now to be more sophisticated.”

In the past months, Keeneland has displayed a renewed spirit of inclusion and lack of tolerance for hate speech. Arvin said she expects a continued focus on diversity within the organization.

“We still have a lot of work to do,” she stated. “I think that as a community in Lexington and certainly at our company, we realize how important diversity and inclusion is and we're going to keep working to make sure we're more representative of a broader community than we have been in the past. It won't happen overnight, but we're committed to doing it.”