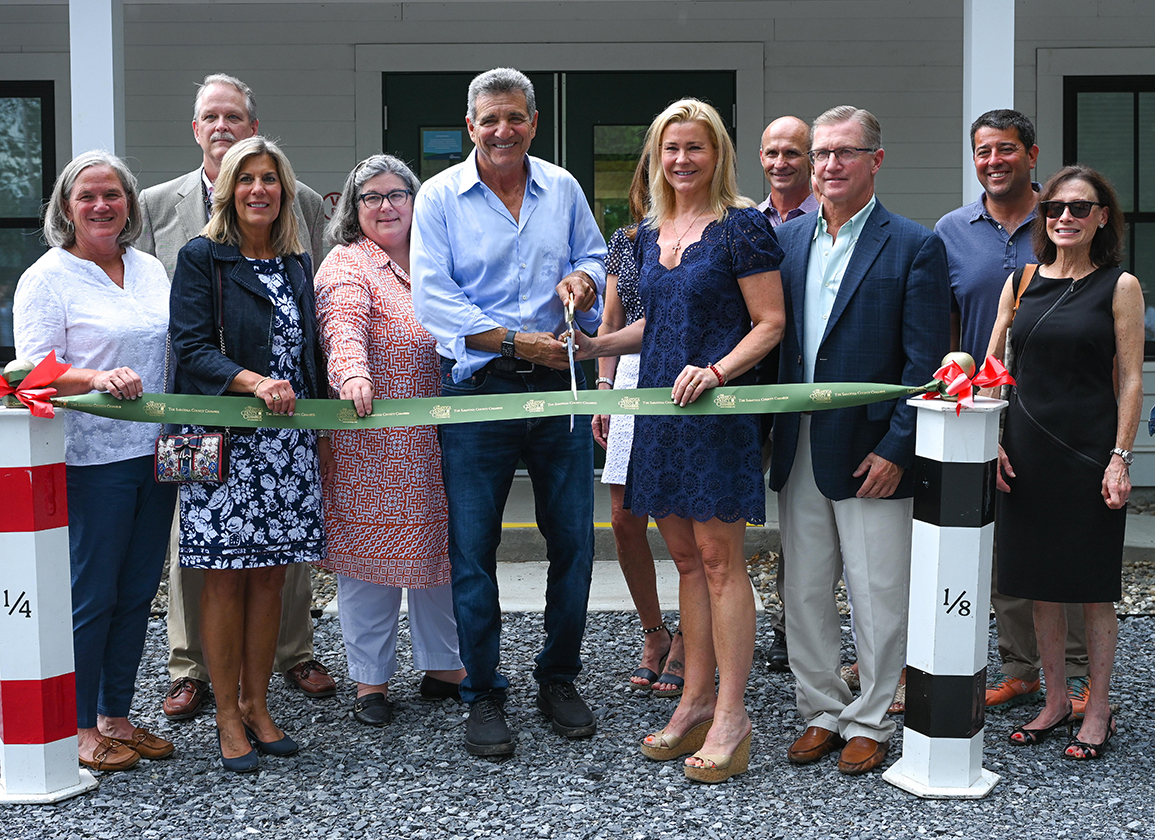 The 4,500-square foot building is located across Union Avenue from the track next to what was long known as the Jockey Y and more recently as the Backstretch Recreation Center. It is named for the late mother of Michael Dubb, the Long Island developer, Thoroughbred owner and driving force behind the project of the Belmont Child Care Association (BCCA). Dubb and his wife, Lee, underwrote the approximately $1-million cost of construction. Faith's House is open from 5 a.m. to 5 p.m. daily during the Saratoga meet to care for the young children of backstretch workers, trainers and racetrack employees. The BCCA operates Anna House, which opened at Belmont Park in 2003.

Faith House, which accommodate 35 children, from infants to 5-year-olds, began operations on Sunday.

“We did this in order to accommodate that the parents of all of our children work two jobs here at Saratoga Race Course, in the morning with the horses and in the afternoon, helping and serving the track people over at the clubhouse,” she said. “It is an amazing opportunity for them to provide extra care and money for their family. So we are here to provide for them and their children and their families.

“We are so happy to bring the most amazing working, proven system of child care and early education to Saratoga. Our program in Belmont has been incredibly successful. We expanded our program during the COVID and welcomed back our graduating students. So they were there all this year with their zooming into their classrooms, but with individual tutors at Belmont Child Care. They never fell behind during the school year. And we are incredibly proud of that. We're looking forward to bringing the same excellent care and education here to Saratoga.”

After introducing several state and local officials who make remarks praising the endeavor, Imperio said that it took 13 years to bring Faith's House from idea to completion. She called Dubb “the man of the hour” and praised him for his leadership.

“I appreciate the kind words, Libby, but this is not Mike Dubb,” he said. “This is this board. This is you. This is everybody who has supported the Belmont Child Care association for the last 20 years.”

Dubb said that the often unseen people who care for the horses that are at the center of the sport, need the resources that are being provided by the BCCA downstate and now at Saratoga.

“One thing we know, those of us who are familiar with the backstretch, is that the people who are out there are working incredibly long hours in incredibly difficult, cruel conditions,” he said. “And they're chasing the American dream just the way my mother Faith's father chased the American dream. Yes, I'm a guy. I have a hammer and nails, and I know how to build things. I'll take that, but that's me. This doesn't happen without the entire support of this great board. All of the people, the advisory board, the Saratoga committee, all of the people. It's just phenomenal.”

Imperio said during the ceremony that Faith House was a dream come true and Dubb repeated those words later.

“As a builder, I feel like I would be somewhat remiss if I didn't take advantage of my talents in construction,” he said. “I know there's a need for day care. I feel like I had the ability to organize it and get it done and fortunately to be involved in financing it. You know, I almost feel like it was my responsibility to deal with it.”

Dubb said he was a racing fan when he was introduced to the now-retired Hall of Fame jockey Jerry Bailey, who told him about a movement to build a day care center at Belmont Park.

“I met with people back then and organized the whole process and got the building built down there,” Dubb said. “It was only after I built the building that I started meeting other owners and trainers and I decided to dip my toe in the water in Thoroughbred ownership. And, as you can see, I don't do anything small.”

In the years since, Dubb has become one of the most successful Thoroughbred owners in the country.

Dubb said construction on Faith's House began in early 2020 with a goal of having it completed by the start of the Saratoga season in July. The COVID-19 restrictions delayed completion for a year, but Faith's House was ready for this 153rd season of racing in Saratoga Springs.

As he stood under cover by the front door out of the rain, Dubb said that the BCCA has been able to deliver difference-making services for the backstretch community.

“A lot of times we get the kids at infancy, literally six weeks,” he said. “And when they graduate in cap and gown, just like a building, we give them a great foundation. And when you have a great foundation, you can build a great future. And that's what we're all about.”