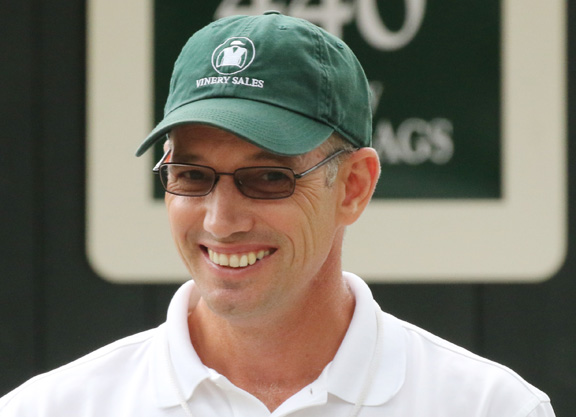 SARATOGA SPRINGS, NY – Action returns to the Humphrey S. Finney Pavilion Sunday evening with the first of two sessions of the Fasig-Tipton New York-Bred Yearlings Sale in Saratoga. The auction, which gets underway at 7 p.m., comes four days after Fasig-Tipton's record-setting Saratoga Select Sale, and will look to follow up on back-to-back record-setting renewals of its own. The New York sale set highwater marks for gross, median and average, as well as top price, in both 2017 and 2018 as the state's breeders, supported by high purses and breeders' incentive awards, continue to improve the quality of their stock.

“This is definitely the best group we've ever brought here,” Derek MacKenzie said as he oversaw his 18-horse Vinery Sales consignment Saturday morning. “I say that every year and every year it's true. The New York-breds have gotten better. Every breeder in New York has stepped their game up every year. I'm guessing it's the hardest sale to get into, so if you don't get the product that's good enough, you don't get in. Everybody wants to get in this sale because it is a great market here.”

The New York-bred sale has traditionally begun the Saturday following the select sale, leaving just one full day of showing. With the auction beginning Sunday this year, the action at the sales barns wasn't quite as frenetic, but consignors were still kept busy.

“We showed 18 horses 775 times [Friday],” MacKenzie said. “I like the format that they moved it back one day. I think it takes a little of the pressure off, so we might not have been as busy as we have in years past, but I think that's a good thing. It's been steady today, but not crazy and we're seeing a lot of second and third looks already, so probably most of the buyers have gotten through most consignments.”

Chris Shelli, who returned to his home state to set up shop in 2003, has had a front row seat to the continuing evolution of the New York breeding program and his Fort Christopher's Thoroughbreds will offer 16 yearlings at this year's Fasig-Tipton New York-Bred Sale. The group, which is peppered with a plethora of first-crop sires, features a pair of colts by Frosted, who was represented by the highest-priced yearling by a first-crop sire this year when his daughter sold for $850,000 during Tuesday's second session of the Select Sale.

“They are both very different, but both have depth of pedigree,” Shelli said of the two colts. “They've been very popular and we are happy with both of them.”

Fort Christopher's first offering by Frosted is hip 369. Out of Boston Lady (Boston Harbor), the yearling is a half-brother to Grade I placed Normandy Invasion (Tapit), as well as to the dam of graded winner Quip (Distorted Humor). Out of Maggie's Storm (Stormy Atlantic), hip 503 is a half-brother to Grade I winner Comma to the Top (Bwana Charlie).

Fort Christopher offers a son of GI Kentucky Derby winner Nyquist (hip 335), who is out of Yanquee Reign (Yankee Victor) and is a half to multiple Grade I winner Melatonin (Kodiak Kowboy), as well as a colt by sprint champion Runhappy (hip 393), who is a half to graded placed Scaramagna (Speightstown).

“I think people are interested and excited to see the first-crop sires and what they are producing,” Shelli said. “So that was part of our design in bringing some of those horses here.”

The Fort Christopher consignment also includes a son of Palace Malice (hip 420). The GI Belmont S. winner is represented by his first crop of 2-year-olds this year and already has a stakes winner to his credit.