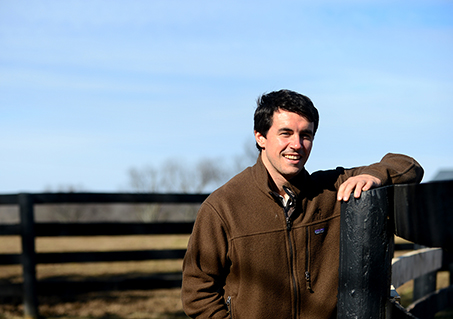 Marshall Taylor and Sebastian Angelillo are currently traveling in South America for Taylor Made Farms with a goal of building new relationships and to increase awareness of the quality of South American Thoroughbreds in North America and help bring talented runners from South America to the United States. A son of Taylor Made President Duncan Taylor, Marshall has worked for Taylor Made for most of his life. He is a graduate of the University of Arizona's Racetrack industry program.

Sebastian Angelillo is a native of Uruguay, where his family owns Haras Sureno, where he worked from a young age. Sebastian has worked for Taylor Made and several other farms and trainers in the States, and has also traveled abroad working in Europe and Australia. Sebastian is a graduate of both the KEMI program and the Irish National Stud program.

The pair will be reporting in for the TDN periodically on their trip.

Our adventure to South America to meet the major players of their racing and breeding industries began on Feb. 3. When traveling to Chile, the first thing you notice flying into Santiago is the country's beautiful mountains. Chile is a long narrow country, stretching along the southwestern part of South America with 4,300 kilometers of coastline of the Pacific Ocean. There are about 17.5 million people who live in Chile with Santiago being the capital city. The country is unique in having the Andes Mountains in the southeast, the Pacific Ocean in the west, and the desert in the northern part of the country. Its neighboring countries are Argentina, Bolivia, and Peru.

The first few days of our trip consisted of visiting farms in the central part of the country within three hours' drive of Santiago. The farms were spread out for the most part, being at least an hour apart. The farmland is very mountainous with very rich soil. Chile has excellent and abundant grass. All of the farms we visited had an irrigation system that ran from the mountains to keep the pastures well-nourished, aiding the rich soil and the grass. Currently, it is the summer in Chile and is the dry season. The irrigation system helps them depend less on the rain during this season.

Chile produces an estimated crop of 1,700 foals a year. Most farms have very large fields where the horses are turned out. During the foaling season (July to November/December) the farms incorporate the same practices that we have in America, such as the mares foaling in the barn. It was a more common theme that once the foals were healthy and a few weeks old they would kick them out and “let them be horses.” Some of the farms would bring the horses up once a day while others would leave them outside continually until sales prep time of their yearling year. In general, farms start prepping earlier for the yearling sales than we do in North America. Last year, the sales-topping yearling was bought for $350,000. This was the half-brother to four-time Group I winner Il Campione (Chi) (Scat Daddy) by Lookin at Lucky. One farm we visited had already started with its sales prep. There are typically resident veterinarians on the farms in case of emergencies.

The horses are very relaxed. In many cases, we went out in the fields and spent time looking at their horses and they would walk right up to us. One of the first things which jumped out to us was the horsemanship on display at the farms. It was really quite impressive. At one of the farms, they presented many of the yearlings to us with the same groom. He was a natural. Each horse came out and showed incredibly well. It seems that there are truly “natural” horsemen wherever you go and this gentleman was gifted. He reminded us of the famous Keeneland ring man, Taylor Made showman and assistant trainer to superhorse Runhappy, Cordell Anderson.

In general, the farms have one to two stallions to whom they breed all of their mares. There are a couple of farms in Chile that have more than two stallions, but for the most part the former holds true. In the past several years, Chile has been the most active country in South America shuttling stallions from North America. Scat Daddy's success in Chile has triggered commercial breeding farms to be more active in shuttling.

There is racing close to every day in Chile with three main racetracks–Club Hipico, Hipodromo de Santiago, and Valparaiso Sporting Club. Club Hipico has dirt and turf courses and runs clockwise like in Europe. Hipodromo Chile and Vina Del Mar both have turf and dirt courses and run counter clockwise like we do in the United States. Hipodromo Chile has a shorter stretch like in the United States where Vina Del Mar and Club Hipico have much longer stretches. On average, throughout the country they run about 20 races a day.

Chile employs a special handicapping system allowing them to classify their horses. They are classified by points, and give horses weight with fewer points to make the races more competitive. The handicapping system begins with 3-years-olds. The country's purses are generated strictly from the pari-mutuel handle. There are no slots or casinos in Chile to help bolster the prize money.

Sunday, December 7th, we attended Derby Day in Chile. The Derby is run at Valparaiso Sporting Club in Vina Del Mar. The Derby is the third leg of the Triple Crown and it was quite the experience. We didn't get the exact number, but there were between 80,000 and 120,000 people in attendance. The races began at 9:30 in the morning and the last race was run at 11:20 that evening. As you can see from the photo the people of Chile love their racing. There were 28 races on the Derby card! People began camping out in the infield a day or two before the race.

The distance for the Derby is a mile and a half. The place was electric leading up to the race. You could sense the excitement and passion from the spectators. When the gates opened, it almost felt like a Kentucky Derby-type of moment. There were 16 horses entered in the race that day. Rio Allipen (Seeking the Dia out of Miss Temuco {Chi}) won the race. It was a very competitive and tough race. The Derby ran a little after 8:00 p.m. It was an eye-opening experience for both of us to see such a huge crowd enjoying the races. A trip to Chile for Derby Day should definitely be added to all racing fans' bucket list.

Vina Del Mar is a beautiful city right on the ocean. Some say that it is similar to Del Mar in California. It is a very unique city with a lot of hills and right along the coast. It was a unbelievable place.

Chile is a very beautiful country and as we drove from farm to farm we experienced beautiful and unique views. Our experience in Chile was great. We met many great people, saw a lot of great farms, and saw some really nice horses. The people there are really amazing and passionate people. We definitely will be back soon to see our many new Chilean friends!

–by Marshall Taylor and Sebastian Angelillo