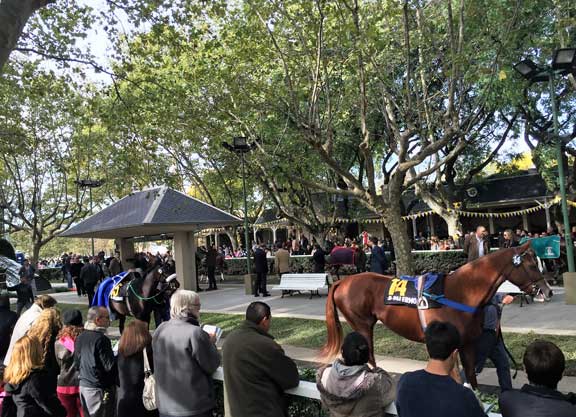 The paddock at Palermo

Marshall Taylor and Sebastian Angelillo are currently traveling in South America for Taylor Made Farms with a goal of building new relationships and to increase awareness of the quality of South American Thoroughbreds in North America and help bring talented runners from South America to the United States. A son of Taylor Made President Duncan Taylor, Marshall has worked for Taylor Made for most of his life. He is a graduate of the University of Arizona's Racetrack industry program.

Sebastian Angelillo is a native of Uruguay, where his family owns Haras Sureno, where he worked from a young age. Sebastian has worked for Taylor Made and several other farms and trainers in the States, and has also traveled abroad working in Europe and Australia. Sebastian is a graduate of both the KEMI program and the Irish National Stud program.
The pair will be reporting in for the TDN periodically on their trip. This is the second in their series. The first may be read here.

Our Second adventure after our great experiences in Chile took us to Argentina, which borders Bolivia, Paraguay, Chile, Brazil, Uruguay, and the Atlantic Ocean. Argentina is the eighth- largest country in the world and is made up of 23 provinces. Most of the major racing is conducted in and around Buenos Aires at three main tracks: San Isidro, Palermo, and La Plata. Races are run daily at one of these racetracks, three of some 50 throughout Argentina. Leading US sire Candy Ride (Arg) actually made his debut at one of the smaller racetracks in the provinces where he broke his maiden going one furlong. Argentina accounts for 8,000 foals, more than any other South American country and is driven by a very open and competitive market.

When you drive into an Argentinian farm you will see a facility with beauty, character, and large fields covering plenty of open space. The trees they have on most farms add a lot of character to their land. The two main areas where most of the major Thoroughbred farms are located in San Antonio De Areco/Capitan Sarmiento, located about an hour and a half outside of the city of Buenos Aires. Five hours south of Buenos Aires City lays Mar De Plata, which has very rich soil and is a great place to raise a racehorse.

Boarding in Argentina is not as common a practice as it is in the United States or the rest of the world, but definitely more prevalent than any other South American country. Their foaling practices are much the same as here in the states–most farms will foal their mares in the barn while some farms choose to foal their mares outside in small paddocks.

Most Argentinian farms use half as much help as we do in a typical breeding farm in the states. A typical day on the farm starts at 6 or 7 a.m. depending on the season. Employees generally work until about noon then get a few hours off before coming back and finishing the day at about 6 p.m.

Sales prep is, for the most part, quite different than the way we operate in the states. Sales prep for the yearling sales starts in January which for most farms is anywhere from four to five months prior to the yearling sales, which are scheduled primarily in the fall and winter months. The most prominent sales start in late March and early April and last through Argentina's winter months. Horses are generally confined to their stall during sales prep with the exception of a daily trip to the walking machine. Most operations offer their own stock for sale, and sometimes multiple farms will combine their stock at the same sale, but usually no more than five farms will join up. Many will offer all of their yearling colts for sale, while retaining some of their top-end fillies. The farms will hire one of the five or six major sales companies to conduct their sale, and the sales company will rent an auction house at one of the racetracks where they will recruit farms to join their sale.

Sales can be as common as two times a week during some parts of the year. The quantity of horses offered at sales is usually between 40 and 60. The top price for an Argentine yearling quite often is just over $100,000, though sales results are rarely published in Argentina, making it difficult to find how much a horse bought for unless you are present. There are no repositories at the sales; all horses are vetted post sale. One sales company tried to incorporate the idea of the repository several years ago, but it didn't take hold. Horses are paid for in quotes from the buyer. Some sales use five quotes while others will go up to 8 quotes. The horses are usually auctioned off in quotes, i.e. if the hammer falls at 50,000 Argentine pesos and there are 8 quotes it would be around 400,000 pesos, or close to $28,000. It is quite common a week before the sale for the farm selling their yearlings to invite potential buyers out for a barbeque and to look at the yearlings.

Racing takes place daily at one of the three major racetracks: Palermo, San Isidro, or La Plata. Palermo and San Isidro are both very large racetracks with very long stretches, whereas La Plata is smaller. Palermo is more famous for its dirt surfaces while San Isidro is more famous for its turf track. Argentina's most famous race is the Carlos Pellegrini. The purses for Group 1 races are about $140,000, while prize money for maiden, allowance, and listed stakes races can range in value between $9,000 and $14,000.

San Isidro Racetrack has an excellent training facility that is over 80 years old, with five different training tracks. There are about 2,500 horses that train at this training facility. Trainers stable their horses at Palermo and La Plata as well. There are several trainers that train on farms, but that number is very few. Most horses train without saddles except on breeze days. The cost of training is much less than it is in the states. For a top trainer it may cost about $1,000 dollars a month. Argentina uses the microchip system for identification purposes.

We conducted a study of all the 106 horses that were shipped from Chile, Argentina, Uruguay, and Brazil to the United States in the past two years, 12 (11.3%) of whom had already won at group level in the home countries. There were 3 Grade 1 winners, each was Argentine-bred. Of the 106 horses, 40 of the horses that shipped to the United States from South America were not group horses in South America. Eleven of the 12 group stakes winners were given at least four months off before breezing. It also looked as if our warmer climate gave most of these horses a better place to adapt. South American mares have also been getting the job done in the States. Grade 1 winner Salutos Amigos, Grade 1 winner and Derby contender Creator, and Grade 2 winning filly Carina Mia are all out of South American-bred mares.

The Argentine government has changed a lot this past year for the good due to a new president. Prior to the new regime, there were two different currencies in Argentina–an official and a black market currency–which made it difficult for people to do business in Argentina. The taxes on exportation of horses were also much higher, but the new president has decreased taxes significantly. The government has changed from more of a socialistic type of government to capitalistic. The market is improving and will continue to improve over time. It is becoming a great time to invest in Argentina.

Argentina's national Labor Day holiday is May 1st. It is a huge day of racing at the Palermo racetrack where five Group 1s are contested, including the Gran Premio Criadores, which is a mile and a quarter on the dirt for fillies and mares. The Gran Premio Criadores is a “Win and You're In” race for the Breeders' Cup and this year's renewal was won was Corona Del Inca (Arg) (Luhuk), who defeated her rival Kiriaki (Arg) (Catcher in the Rye {Ire}) right on the wire.

Better than 50,000 racegoers were in attendance on a sun-splashed program that began at 1 p.m. and did not conclude until 10 p.m. In the infield, a family-friendly atmosphere featured food trucks and even the non-racing fans enjoyed the day. There were not the large number of partygoers like we see in other parts of the world on big race days. Superstar jockey Pablo Falero, a native of Uruguay, won six races on the card including the Criadores and two other Group 1 events.

Argentina's racing industry is on the rise. It is the most open and competitive market in South America at the time. The horses have proven their talent at every level all over the world. The future looks very bright with the new government change. There are many successful young people in the industry and see the country and the Thoroughbred market down here really growing and becoming more global moving forward.

Next Up: Exploring South America: A Uruguayan Experience