Expensive Palace Malice Colt Graduates With Ease at the Spa 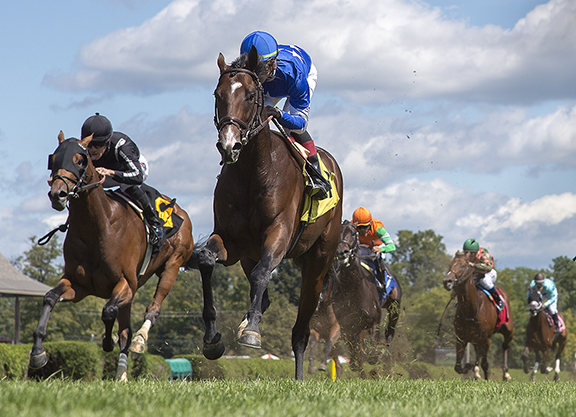 1st-Saratoga, $90,000, Msw, 8-31, 2yo, 1 1/16mT, 1:44.16, fm.
STRUCTOR (c, 2, Palace Malice–Miss Always Ready, by More Than Ready) got favorite backers off to a good start on the third-last day of racing at Saratoga, sitting a soft trip off a longshot leader before proving easily best in the day's opening event. Sent off at even-money to give trainer Chad Brown his 40th winner of the meet, the bay colt was first to break the line, but ultimately deferred to sit second to the tugging Eternal Summer (Summer Front), who led them along at a very sedate tempo. Eternal Summer was still in front after six panels in a pedestrian 1:15.87, but Irad Ortiz, Jr. gave Structor a squeeze approaching the eighth pole and they claimed the pacesetter with ease before holding firm under a hand ride to score by 1 1/4 lengths. Second choice Sul Moon (Malibu Moon), desperately unlucky when second in a July 27 maiden at longshot odds, ran on nicely to round out the exacta while never a danger to the winner. The 10th winner for his freshman sire (by Curlin), who was represented Thursday by P. G. Johnson S. winner Crystalle, Structor was a $160,000 acquisition from last year's Keeneland September and, as an $850,000 OBS March juvenile (:21 1/5), was the most expensive of Palace Malice's 36 2-year-olds sold at public auction this year. Structor's winning dam is a daughter of MSW Miss Seffens (Dehere), making her a full-sister to GII Breeders' Cup Juvenile Fillies Turf winner MoreThan Real. Miss Always Ready, purchased by Three Chimneys Farm for $400,000 at the 2014 Keeneland April 2-Year-Olds in Training Sale, is the dam of a yearling Malibu Moon filly, as well as a full-sister foaled this past Feb. 8. She was bred to both Will Take Charge and Gun Runner this spring. Click for the Equibase.com chart or VIDEO, sponsored by Fasig-Tipton. Lifetime Record: 1-1-0-0, $49,500.
O-Jeff Drown & Don Rachel; B-Three Chimneys Farm, LLC (KY); T-Chad C. Brown.