Exceed and Excel's Sound and Silence Takes the Roses 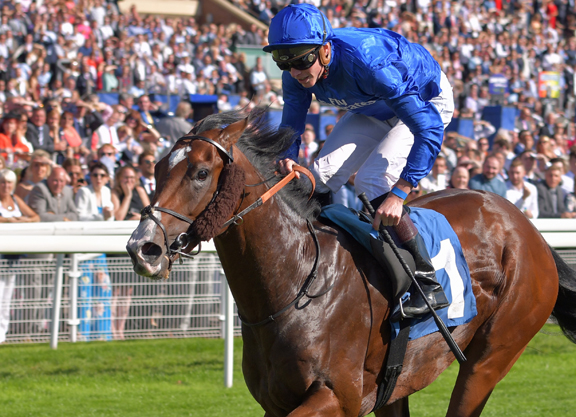 Flashing early talent when off the mark on debut at Newmarket's Craven meeting Apr. 18, Sound and Silence was fourth in Sandown's Listed National S. when too much use was made of him May 25 and under waiting tactics was able to swoop late and take Royal Ascot's Listed Windsor Castle S. June 20. Only 11th trying six furlongs for the first time in the G2 July S. at Newmarket July 13, the bay bounced back here looking like a real five-furlong specialist in the process. Held up in rear early by James Doyle, he was delivered towards the stand's side in the nick of time upstage Abel Handy in the last strides. “He is a fair horse and it was a good performance at Royal Ascot,” his rider said. “He's very fast with a lot of toe and things didn't work out in the July Stakes–he got caught on the edge and over-raced a touch–so Charlie said to bury him and let him use his turn of foot. He's all about speed and although he will stay six one day we're alright where we are at the moment. On faster ground he will let rip that bit better too.” Charlie Appleby's assistant Alex Merriam added, “Five furlongs is quite obviously his trip, I don't think he stayed at Newmarket. He's shown plenty of speed there and I've just spoken to Charlie who mentioned the [G2] Flying Childers [S. Sept. 15] could be next at Doncaster.”

Sound and Silence is out of the unraced Veil of Silence, who is a daughter of the G1 Irish 1000 Guineas and G1 Fillies' Mile heroine Gossamer. She produced the G1 Racing Post Trophy scorer Ibn Khaldun (Dubai Destination), while the third dam Brocade landed the G1 Prix de la Foret and was also responsible for the G1 Irish 2000 Guineas and GI Breeders' Cup Mile-winning sire Barathea (Ire) and the GIII Countess Fager H. scorer and stakes producer Free At Last (GB) (Shirley Heights {GB}). From an excellent Gerald Leigh family recently boosted by the G2 Park Hill S. success of Silk Sari (GB) (Dalakhani {Ire}) who was also runner-up in the G1 QIPCO British Champions Fillies & Mares S., Veil of Silence's yearling filly is by Pivotal (GB), while she also has a filly foal by Dubawi (Ire).