Exceed And Excel's Mawj Survives Enquiry In The Duchess Of Cambridge 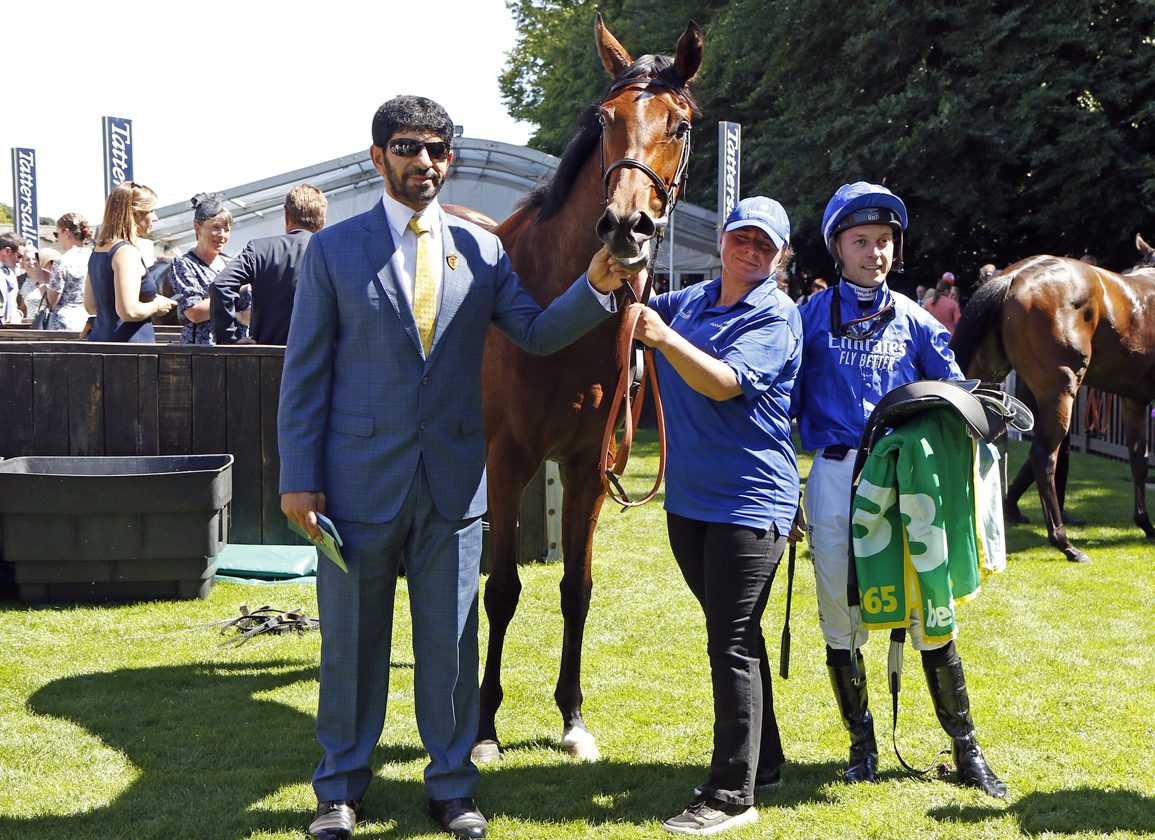 Godolphin's homebred 2-year-old distaffer Mawj (Ire) (Exceed And Excel {Aus}–Modern Ideals {GB}, by New Approach {Ire}) exhibited an impressive array of gears when earning 'TDN Rising Star' status by daylight in her May 14 debut over six furlongs at Newmarket's Rowley Mile venue and followed up with a second in Royal Ascot's June 17 G3 Albany S. in her only other start last time. Lining up as a 4-1 chance for Friday's bet365-sponsored G2 Duchess of Cambridge S. at HQ's July course, the G1 Moyglare Stud S. nominee bounced back in style, and survived a stewards' enquiry, to claim a first black-type triumph in the six-furlong test. Positioned on the lead after a slick getaway, she was bustled along when threatened on both sides at the foot of the hill and kept on strongly, despite a leftward drift, in the closing stages to deny the hitherto unbeaten Listed Empress S. victrix Lezoo (GB) (Zoustar {Aus}) by a half length for a career high.

“The way she won the race is exciting and now we're looking at the [G1] Cheveley Park,” revealed trainer Saeed bin Suroor, who notched his second win, and first since 1997, in the contest. “She's a tiny filly, but she obviously has class. I remember when she won first time out, off the back of one piece of work, because she was light and she won well. She was behind a good filly at [Royal] Ascot and now winning this is a good result for her. I hope she grows and if she does it would be great. I'll take her to Dubai to find nice races for her in the winter, but her next target is the Cheveley Park and she will have a break now. Seven furlongs will be better for her at the end of the season.”

Winning rider Ray Dawson incurred a three-day suspension for careless riding in the closing stages and added, “Obviously there was interference, I was unaware where Frankie [Dettori on Lezoo] was until probably the last furlong and it was a little bit late then. I straightened my filly up and she was always going to stay in front. We kept the race, but it's mandatory that you're going to get between two and four days. I got three which is fair enough. I watched the video of the head-on and I did let her drift across and I've got to be punished for that. I am over the moon for this filly and we got very excited when she won first time out at Newmarket. Ascot didn't work out the way we hoped and she ran a great race [in the Albany], but we bumped into a very good horse on the day. She jumped and was very professional today. She wanted to please me the whole way and wanted to get her head in front. She was tough when she needed to be and she's got a lot of scope for the future. She's definitely heading towards a Group 1, she's ticking all the boxes and the [G1] Cheveley Park sounds about right at this moment.”

Ralph Beckett, trainer of runner-up Lezoo, commented, “I was very pleased with the run, she ran her race and left it all there. We just couldn't quite get it done. She was ready for it, from the way she was training, and I was happy to come back here after her Listed win here 13 days ago. Six furlongs on this [good-to-firm] ground appears her gig. Her dam was very much a soft-ground filly that won the [G3] Firth Of Clyde, so I wouldn't mind trying her on it.”

Thriller! Mawj, who finished second in the Albany Stakes when last seen, gets the better of Lezoo to win the Duchess Of Cambridge Stakes @NewmarketRace, although did cause interference to the runner-up

A stewards' enquiry has been called… pic.twitter.com/fwRoNoAky4