Home » Archive » Europe » Ex-Racehorses At The Heart Of Therapeutic Venture

Ex-Racehorses At The Heart Of Therapeutic Venture 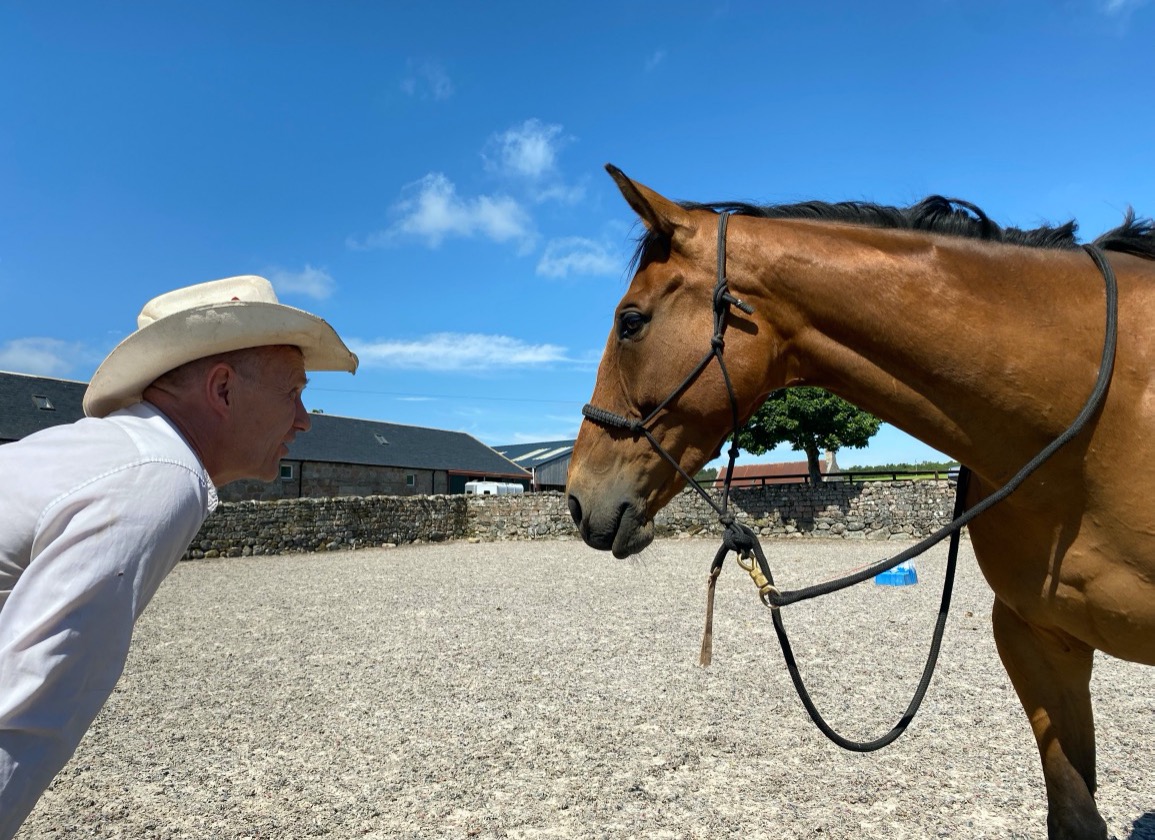 For many people, the recent Panorama documentary which focused on the desperate plight of a handful of former racehorses ending up at an abattoir was distressing viewing. For many of us who work with racehorses, it also brought about a feeling of utter frustration.

Frustration that a 30-minute programme which showed just one side of a story could potentially undo so much of the good work that has been done in aftercare for ex-racehorses for years. Frustration that some people who do very well out of owning and training racehorses still do not take the necessary steps when it comes to rehoming or, in some cases, euthanasia.

There are plenty of wonderful examples of how we can help Thoroughbreds to have a useful second career–in eventing, showjumping, hunting, polo, or simply as a much-loved riding horse–and what is perhaps not emphasised enough is how they can help us. Nowhere is this more apparent than at Horseback UK in Scotland. Set among the heather and gorse-clad hills of rural Aberdeenshire, the charitable venture is a therapy centre with a difference. Here the 35 counsellors have four legs, some longer than others, and none so fleet of foot as the four former racehorses among the mixed equine herd.

Set up 12 years ago by Jock and Emma Hutchison, Horseback UK was a response to Jock's experiences as a Royal Marine Commando and his desire to help some of his former colleagues who had left the military after tours of Afghanistan in less fortunate circumstances than himself, many with life-changing injuries.

“Having left the Marines myself I know that it's not a job, it's an identity, and I thought that these guys needed a bit more help to adjust to the civilian world,” he says. “What we learned from the process is that the guys really need three things after injury and recovery. They need community, and they need to be part of a team because that's what they miss most. They also need purpose in their lives. They're people with a lot of energy, and they need to be empowered. These people can contribute enormously to our world if we give them a platform to do that from. And we do that with horses.”

Hutchison continues, “At the beginning we thought that we were going to do that to give people mobility with dignity. There was a huge number of people who came here who had been injured by IEDs and they had lost lower limbs. These were fit, young people who enjoyed being in the great outdoors.

“We learnt fairly quickly that even if the physical injury looked as if it was their biggest problem, everyone who was affected physically was also affected mentally.”

The three-week residential course includes interacting with horses from the ground up for those with no previous equine experience, as well as a range of outdoor activities, and it results in a Scottish Qualifications Authority Level 4 Certificate in Personal Development Through Horsemanship. The courses have since been expanded from the military focus to include community and school courses aimed at helping folk with a range of issues, including substance abuse, depression and autism. Over the years, around 2,500 people have benefited through the work of this charity which recently gained a royal patron in the Duchess of Cornwall.

“Five years ago we started to work with young people,” says Hutchison. “These were kids who were disengaged with school and the vast majority of them had lost their confidence and lost that belief in themselves. It was about reconnection and rebuilding that confidence.”

He continues, “When people have lost their confidence they find it difficult to interact with other people, but they don't mind interacting with a horse. We wanted to make sure that their time here was safe, so the relationship was going to be built on the ground. That building up of the relationship actually proved to be much more powerful than the riding, because what it did was it empowered people to become leaders again. And they hadn't been a leader of anything, not of themselves, not of their life, not of their fate, and all of a sudden they were controlling three-quarters of a ton of animal–a beautiful animal.”

The Hutchisons have a wealth of equine experience through lifelong contact with horses in different roles and they are both keen exponents of western riding. Among their team at Horseback UK are two people with strong links to the horseracing world. Tania Kindersley, who promotes the charity through social media, grew up in Lambourn where her father Gay, the legendary champion amateur rider, was training. Yard manager Duggie Loy worked for several trainers in England and Scotland for many years before depression and anxiety led to him being referred to Racing Welfare. From there, the Horseback UK course was suggested to try to help him regain some equilibrium after two suicide attempts. Loy later returned as a volunteer and loved the lifestyle in Aboyne so much he ended up working at Horseback UK full time.

He says, “When I came up here four years ago I found a totally different way of working with horses and for me it brought back the joy of working with them. It's a bit of a slower way of life but gradually I've got the yard coming round to ex-racehorses and we now have a team of four of them among our herd of 35 horses.”

Loy continues, “The thoroughbreds are brilliant at this job. I think people have this impression of ex-racehorses being wild or nuts but they are not. They're highly trained, and they just need time to adapt. For a lot of the guys with PTSD, possible anger issues and anxiety, being able to work with a racehorse and bring it down by using breathing techniques, just standing and taking time, we're actually working on the person as well as the horse without them realising it. It's actually quite sneaky. I didn't realise it when I was doing my course. It wasn't until I came back as a volunteer working with other horses that I realised 'ah, that's what happening, that's how I learned to relax and be around horses and people again'. They're brilliant.”

Jock Hutchison did not need too much convincing when it came to taking on Thoroughbreds at Horseback UK and he is keen to expand his links with the Retraining of Racehorses (RoR) organisation.

“I got introduced to Thoroughbreds by some fantastic people,” he says. “Di Arbuthnot, who runs RoR, and Emma Balding and it was a fantastic way to start. I didn't know anything about Thoroughbreds until I went down to Kingsclere and I was astonished by the love the people had for the horses. I was just taken up by the whole thing.”

He has since forged his own strong partnership with the former sprinter Peopleton Brook (GB) (Compton Place {GB}). Now 19, the gelding ran 93 times across seven seasons, winning on nine occasions.

“Peopleton Brook broke down the barriers,” Hutchison continues. “I used him in demonstrations at the Grand National, and in presentations with business leaders. To me, my relationship with him is the epitome of team work for the people who come here. They've become isolated so a huge step forward in their recovery is to become part of a team again.

“The brilliant thing about the Thoroughbred is that he's clever enough and sensitive enough to react. We've tried using other horses but there is nothing that compares to a Thoroughbred.”

As with so many businesses and charities over the last 18 months, the pandemic has caused much disruption. But at Horseback UK it has also opened up a new avenue. In-person course work had, until recently, given way to online presentations and that included two pilot courses for frontline NHS workers who have endured their own form of trauma in dealing with Covid patients and their families.

“We have ambitions to expand what we have learned here and to that end, Di, Emma and others are talking about how we can get more Thoroughbreds involved in the wellbeing of the people of this country,” Hutchison explains.

“We've just carried out two pilots for the NHS, and there has been a huge improvement in the wellbeing of the people that we have talked to on Zoom. The idea now is to expand into the Grampian region and to roll out to 16,000 NHS workers as the next step, and then roll it out to the country.”

The Hutchisons hope to have Thoroughbreds at the heart of this project, which has the backing of RoR chief executive Di Arbuthnot. She says, “I've always felt very strongly about using horses in this way–for me it's even as simple as remembering crying into my pony's mane as a child. They are wonderfully therapeutic to be around.

“I'm a huge fan of Jock and Emma and their work, especially with the NHS staff. Jock has realised that the Thoroughbred is intelligent and versatile and really works in this area. Although Horseback UK will never take a huge number of our horses I think it is really important that we use them and if there are suitable horses to go into this area we should be right behind it, which we are.”

Hutchison's own bond with the veteran Peopleton Brook is clear to see, as is the older horse's attachment to his new paddock mate Delatite (GB) (Schiaparelli {Ger}), a bumper winner who was retired from racing earlier this year. Fetlock surgery during his time in training put a further competitive career in doubt, but the 8-year-old gelding has adjusted quickly to his quieter life in the Highlands and is quickly learning the ropes, from connecting with the Horseback UK team on the ground to neck reining.