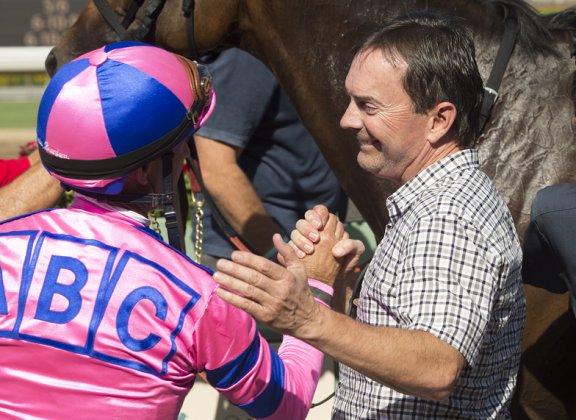 With a personal-best season of $4.2+ million in stable earnings in 2016, highlighted by Champagne Room (Broken Vow)'s 33-1 upset victory in the GI Breeders' Cup Juvenile Fillies, trainer Peter Eurton is locked and loaded to keep the momentum rolling into the New Year.

“It was just an amazing year,” Eurton said, reflecting on his sixth straight year of bankrolling seven figures in earnings. “I can only be happy to have a carbon copy year like I had last year, but it's going to be hard to do. Finishing it off with 'Champagne' and then with 'Betty' [Bettys Bambino (Unusual Heat) coming back like that [to win the GIII San Simeon S. Dec. 26 off a 22-month layoff] was very gratifying.”

Champagne Room, also a heroine of last term's GII Sorrento S. and third-place finisher in the GI Del Mar Debutante S., is aiming to make her sophomore debut in the GII Las Virgenes S. going a mile Feb. 5. The $310,000 OBSAPR purchase, campaigned in partnership by Joe Ciaglia, the Alesia family and several others, posted an easy four-furlong move in :49 (26/60), her third workout since mid-December, in Arcadia Jan. 3. Bred in Kentucky by Respite Farm, Champagne Room was produced by the winning Bernstein mare Lucky to be Me.

“She's been doing very well,” the 59-year-old native of the Golden State said. “We gave her a little bit of time off there–not a lot–and just kind of walked her for a few weeks and she's really enjoying herself right now. The first couple of works back were trying to get her to slow down a little bit, and [Tuesday] I think we accomplished that, especially with the off track, I didn't want her to go too fast. She went an easy half mile and came home in :24 1/5 and it went very well.”

“It will be an interesting race for those other two fillies,” Eurton said. “That will be fun to watch. I'll just watch those two run and enjoy it, and about four weeks later will be Champagne's race.”

Kobe's Back (Flatter), a top sprinter for the Eurton barn with wins in last term's GII Palos Verdes S. and GII San Carlos S., is on the comeback trail. The stretch-running 6-year-old gray, off since a third-place finish as the 9-5 favorite in Santa Anita's GI Triple Bend S. June 25, covered four furlongs in :48 (5/60) at the Great Race Place Jan. 3.

“It's so nice to see him training again,” Eurton said of C R K Stable's millionaire. “He had a few months off. He just needed a little break. We'll be trying to get that elusive Grade I with him hopefully in the [GI] Triple Bend in early March [Mar. 11]. Unless he gets fit quicker than I think, there's also the six-furlong [GII Palos Verdes S.] Feb. 4. With the rain and everything though, we'll just have to see–he's had some wonderful gallops and a beautiful half mile [Tuesday]. He looked so strong, but he still has a little ways to get him more fit.”

The 6-year-old California-bred gelding Ashleyluvssugar (Game Plan), a two-time Grade II on the lawn in 2016 and a last out runner-up in the GII Hollywood Turf Cup S. Nov. 25, will return to action in the $250,000 California Cup Turf Classic Jan. 28, per Eurton.

With a stable of 45 head in training at Santa Anita, the jockey-turned-trainer has also saddled the likes of recent Grade I winners Weemissfrankie (Sunriver) and the ill-fated Dance With Fate (Two Step Salsa). What's it been like campaigning his first Breeders' Cup winner and being able to look ahead to races as prestigious as the GI Kentucky Oaks?

“It's pretty nice,” he said with a laugh. “I really think she should get better and better as an older horse when she learns how to run. She's still very aggressive as you saw [when fourth after pulling early] in the [GI] Chandelier. In the Breeders' Cup, she had her trip and she had so much horse. It was nice to see her get a chance to run free, and that's what she wants to do. She might become a little more push button as she gets older, but right now the 'on' button is always on.”

Eurton concluded, “It's so much to look forward to, to see what she can do as a 3-year-old. It's not going to be easy, but it's going to be a lot of fun to shoot for the Oaks. There's also a ton of grass in her pedigree. It could be down the line, but we could also be looking at races like the [GI] Belmont Oaks in the latter part of the year as well.”