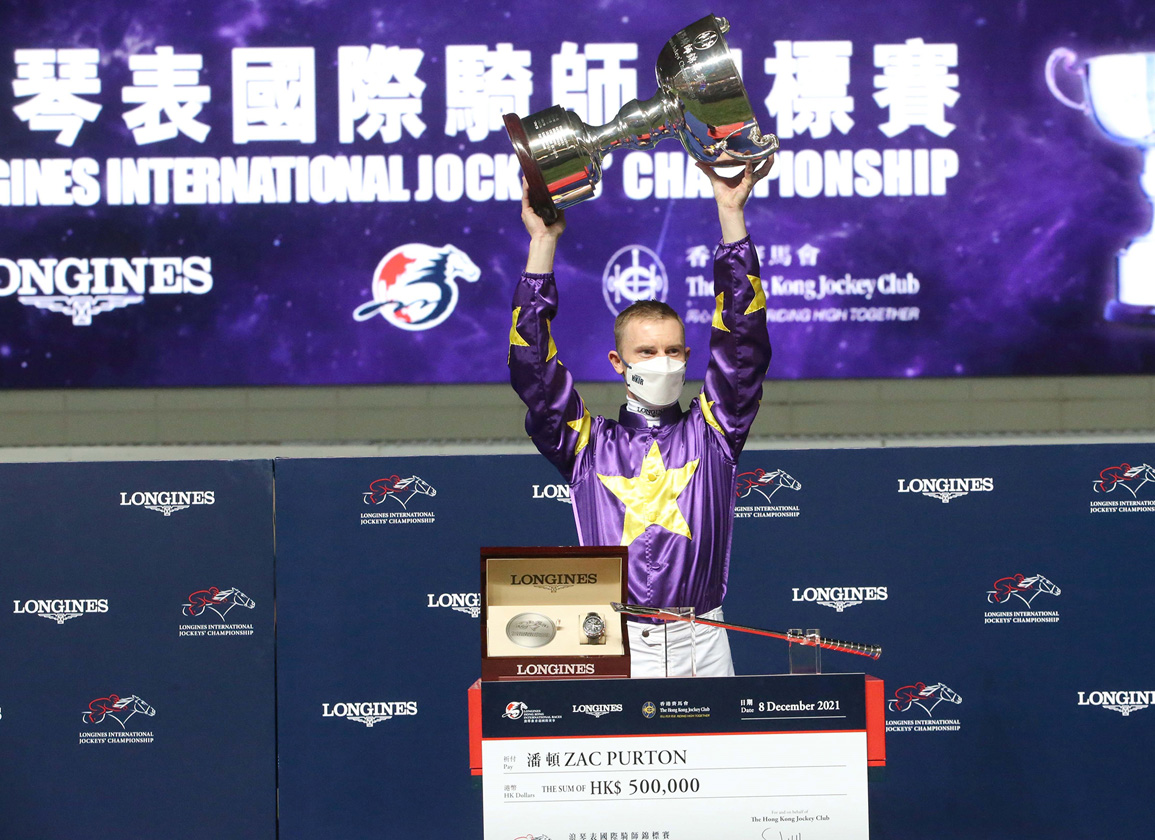 European-based jockeys managed victories in three of the four races comprising Wednesday's Longines International Jockeys' Championship at Happy Valley Racecourse on Hong Kong Island, but consistency was rewarded when Zac Purton–out of luck on the evening–had the last laugh, placing in all four legs to take home the HK$500,000 (£48,558/€56,739) first prize. Currently atop the jockeys' premiership in Hong Kong, Purton was winning the IJC for a third time in five years, having taken it in 2017 and again 12 months ago. He joins Frankie Dettori and Douglas Whyte as three-time winners of the IJC.

Hollie Doyle made IJC history in 2020, becoming the first woman to win a leg of the series when booting home favored Harmony N Blessed (Aus) (Magnus {Aus}) for trainer David Hayes. Her partner, Tom Marquand, got the evening off on a winning note Wednesday–also for the Hayes yard–producing $35 (5-2) favourite Awesome Treasure (NZ) (Charm Spirit {Ire}) from a handy spot in the nick of time to earn 12 points, while Purton set a searching gallop aboard Circuit Seven (Aus) (Deep Field {Aus}) before weakening late to third (video).

Doyle, who finished in a tie for third last year, was centrestage again in the IJC, putting $209 chance (19-1) Viva Hunter (NZ) (El Roca {Aus}) on the speed from gate 12 before just holding off a late dive from Purton and Glorious Lover (Ire) (Tamayuz {GB}) (video) in leg two. Ryan Moore was an unlucky third astride $3.90 pick Ai One (NZ) (Shocking {NZ}).

“I thought I had been headed home,” Doyle told the HKJC notes team. “[Winning] is just as good if not better [than last year]. It's good to have a crowd here, it lifts the atmosphere and I'm blessed to have had the luck I've had. It's very special to win against the world's best jockeys and it's a huge honour for Tom and I to be asked back here.”

James McDonald has been in cracking form in Australia over the past month, riding no fewer than 10 winners during the Melbourne Cup Carnival, including the big race aboard Verry Elleegant (NZ) (Zed {NZ}). The New Zealander, second when making his IJC debut in 2011 and third in 2014, tossed his hat into the ring in Wednesday's third leg, coming from what appeared to be a hopeless position at the midway point of the extended-mile race before knifing through late with 8-1 Invincible Missile (Aus) (I Am Invincible {Aus}) to just touch off Purton and Amazing Plus One (Ire) (Shamardal) in another rousing finish (video).

There were as many as seven chances entering the fourth and final leg of the championship, but none of the leading lights managed to strike a decisive blow, as Elon (GB) (Bated Breath {GB}) came with a stinging rally from the back of the pack beneath Mickael Barzalona to post a 12-1 upset (video). It was Purton yet again on the losing end of a photo, but his runner-up effort secured the IJC on 22 points. Marquand, Doyle, McDonald and Barzalona finished in a tie for second place on 12 points.

“I came here a little bit worried about the quality of horses I was riding and knew that I was going to need things go my way and luckily I was able to get some nice runs on them and give them their chances,” Purton said. “It was a bit frustrating I kept getting beaten in those photos, but I suppose that makes for good racing and a good competition. The points added up, it's very satisfying.”

Hayes took home an HK$200,000 bonus as leading IJC trainer for his victory with Awesome Treasure and a pair of thirds to finish with 20 points, eight clear of a group of four fellow trainers on 12 points.