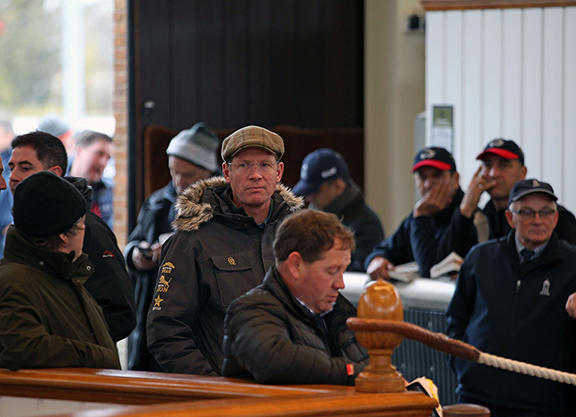 Everyone in the bloodstock industry can see the bump in the road ahead. It’s just a case of getting across without causing lasting damage to the engine. As such, European horsemen Tuesday applauded the dovetailing of North America’s premier yearling sales as the type of wholesome collaboration required to tackle a crisis that transcends borders and oceans, never mind commercial rivalries.

True, one or two quibbles could be heard on the other side of the pond. On the whole, however, Monday’s announcement by Fasig-Tipton—positioning a two-day sale in Lexington, as a staging post between the rescheduled GI Kentucky Derby and the Keeneland September Sale—was welcomed as also serving wider interests besides those obvious to the domestic market.

On the one hand, it would seem unlikely that many European professionals will be at Churchill Downs on September 5. Even as it is, their calendars are already going to be chaotic, on and off the racetrack, once the lockdown is eased; and the Fasig-Tipton Selected Yearling Showcase, salvaging the wreckage of its July and Saratoga (Select/N.Y.) auctions, will already demand an extra commitment of time and resources. On the other hand, the emergency format has created a fresh opportunity for those who generally discount two transatlantic trips in barely a month, to Saratoga and Keeneland, just as their own yearling circuit is getting underway at Deauville and Doncaster.

Brendan Holland of Grove Stud, who has made some characteristically inspired transatlantic pinhooks, is a case in point.

“Every year it’s on my mind to go to Saratoga,” he said. “Even though there doesn’t tend to be a whole pile in that particular sale for European pinhookers, I always wanted to go. So yes, I will change my flights now to take in the [Fasig-Tipton] sale before Keeneland. And I would imagine I won’t be the only European doing that. I usually go on the Friday, for Book I, so this time I will probably travel on the Monday or Tuesday.”

Michael Donohoe of B.B.A. Ireland takes a similar view. “Round that time of year, it’s hard to make separate trips, to go to Saratoga and come home and then go back out again to Keeneland,” he reasoned. “So in that regard it would definitely be easier, from a European agent’s point of view, than having to take in New York.”

Both men drew parallels with the recent announcement that Goffs U.K. and Arqana will host their breeze-up sales jointly in Ireland at the end of June. “At the end of the day, these sales companies are all rivals,” Holland said. “Same as you have in every job. But it’s good to see people being so pragmatic, and trying to restrict unnecessary travel.”

“They’re looking to the future,” said Donohoe. “It’s all about getting those yearlings sold. It’s the same as we’ve been seeing with the breeze-up guys: there’s a lot of people clubbing together and helping each other out. Fasig-Tipton and Keeneland are seeing the bigger picture. If people can get those yearlings sold, they can go back in November to buy foals and keep the whole thing rolling. So really it’s a time to throw all rivalries aside, for the good of the industry, and to get as many horses sold as possible.”

Ted Voute, a trailblazing sales consignor in Europe and a familiar face in the U.S., was also full of praise for this bold response to the unprecedented challenge facing sales companies. At the same time, he suspected that these uncharted waters may prove especially difficult for Fasig-Tipton, whose unique selling point at Saratoga is—well, Saratoga.

“I think it’s a great idea to put it up by the Derby,” he enthused. “There’ll be a lot of people going to the sales who’ve not necessarily been to the race, and it would be a great experience to combine the two. But a lot will depend on what Fasig-Tipton can attract to the sale. For the last few weeks, Keeneland have been able to plough ahead, in that they had the ‘safe’ date, if you like.

“But Fasig-Tipton July is a bit like the Doncaster sale in Britain, with those forward, breeze-up types. They will have lost some of that ‘forwardness’ between July and September, and a lot of the others will have caught up with them. And then, for Saratoga, they always have that New York crowd of owners in town. So if I were consigning, I don’t quite know why my ‘select’ Saratoga yearling might be better sold a week before Keeneland. Maybe the bigger consignors will split them apart a bit: say they’ve two very nice American Pharoahs, they could try to steal a march with one. But auctions are like fires, they take a bit of getting going. So you just hope Fasig do get rewarded, because when I read about it I thought it was a great idea, and a great saviour in many respects.”

Hugo Merry, a Saratoga regular, feels that the catalog there has become so oriented to the domestic market that a European presence at the consolidated auction will be of marginal importance anyway.

“I think the Europeans have become less and less significant at Saratoga, and the shopping I’ve done there over the last three years has all been to stay out in the U.S.,” he explained. “There’s very little Japanese participation, and it’s so early in the European calendar that if anything their October Sale has been better for our pinhookers. But I’ve been lucky at Saratoga. I’ve bought yearlings nearly every year, and done well with results, so I’d definitely be looking at going to the Fasig-Tipton sale—even if my clients are in retail and the stock market, both of which have been hugely impacted.

“The ‘Saratoga’ market might be diluted, anyway. The entries are still a work in progress, and everyone is going to be taking a view. But it’s very important Fasig do maintain their yearling market share. It’s like Goffs and Tattersalls over here: you’ve got to have competition, otherwise it’s unhealthy for everyone. This year they just have to make best of a bad lot. It’s all so up in the air, at the moment, it’s been very hard for sales companies to put anything in concrete. They’ve just got to put a date out there and hope they can hold it.”

Merry also suspects that industry diary congestion, inevitable after the lockdown, will render Kentucky just too impractical for many Europeans. Even as it stands, the rescheduled breeze-up sales in Europe will virtually run into the yearling sales.

Then there is the racing program to consider, too. At the best of times, it is remarkable how often the bloodstock circuit seems to detach itself from the arena where its valuations are ultimately supposed to be measured. And while there were enough balls already in the air on Newtown Pike, without adding the European racing calendar, one respected voice with an international purview did sound a note of disappointment.

David Redvers, racing and bloodstock advisor to Sheikh Fahad, felt that the most harmonious solution would have been for Keeneland to be staged straight after the substitute “Derby” weekend, with Fasig-Tipton slotting in just before.

“That way we could have been home for the Irish Champions’ Weekend [September 12-13],” he reasoned. “Doncaster aren’t going to be very happy either, with the G1 St Leger that Saturday. We [Qipco] don’t sponsor the G1 Irish Champion Stakes anymore, so it’s not such a big deal for us—but if we had Kameko (Kitten’s Joy) running, for example, it would be a major shame for us. That whole autumn schedule, assuming we are able to do anything, is going to be absolutely jammed. But the likelihood is I wouldn’t be going to the Kentucky Derby anyway; and if we did have a runner in the Irish Champion Stakes it would be very disappointing not to be there, without being the end of the world. I will probably now go out on the Tuesday and stay to the following Friday.”

Each individual calendar will have its inevitable complications, of course. Voute, for instance, may be selling at the Tattersalls Ireland Yearling Sale at Ascot, scheduled for September 8; Holland, equally, tends to sell at the same firm’s Fairyhouse auction from September 22, which would prevent him staying for the second week of Keeneland.

Reliably humorous, however, Holland added: “In theory, it works for me to be going a few days earlier; in practice, come September I might find that I don’t fancy spending three weeks in America! Everyone’s waiting for the end of lockdown, but when we get free movement again I think you’ll find a lot of people aren’t too interested in having it, in the short term anyway. Though I must say every year I get the same buzz, flying in over all those farms. So, of course, I am looking forward to it.”

Donohoe said he agreed that even the idea of booking an international flight right now seems somewhat surreal. “A lot of airlines don’t even have the facility to do so at the moment,” he said. “In a normal year, September wouldn’t seem so far away—but the way things are changing, day to day, it could still feel a lifetime. We’ll have to see what the travel restrictions might be, by then. But at least there’s light at the end of the tunnel.

“Please God, this time next year we’ll be looking back and reminiscing on the hard times we had in 2020. There’s going to be a down, in the sales, but we’ve seen downturns before and this is an industry that does bounce back quickly. Some people who wouldn’t have been terribly active will see an opportunity now. Cash is king, and it will probably be a very good time to invest.”

Voute, for his part, remembers seeing one particularly sharp operator pounce on a bunch of classy racemares after the financial crisis of 2008, and covering the outlay with their first foals as the market recovered. He predicts change on many levels, after the pandemic, not least when it comes to polarised stallion fees. But that state of flux is exactly why he hopes to participate in the salvaged sales program in Kentucky later this year.

“I think it’s great to see these sales companies working together, and trying to come up with solutions for everyone’s benefit,” Voute said. “We’re going into unknown territory. A bunch of people are likely to be getting out, or at least trimming back. It’s going to be tough. But there will be value around; there will be opportunities.”