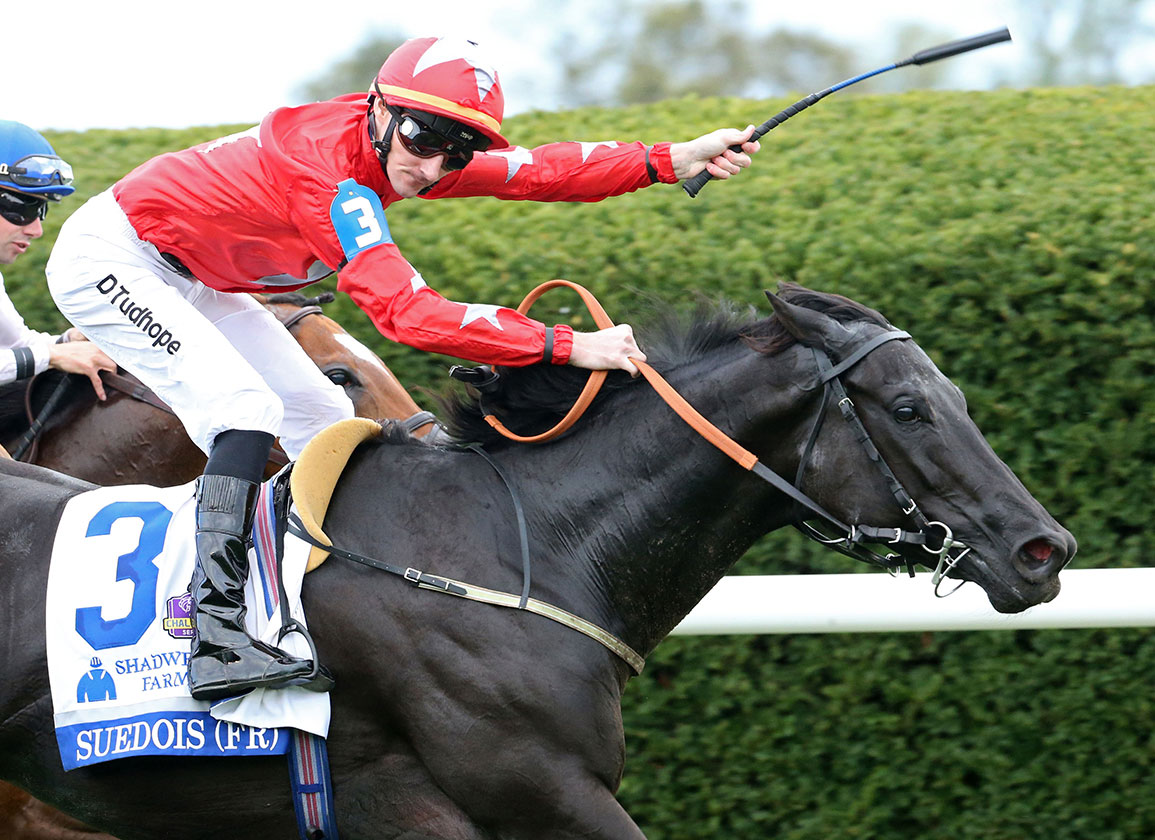 Unheralded Suedois, whose best European form had come over six and seven furlongs in England and France, proved he could mix it with Grade I milers in this country, coming from midfield to just nab pacesetting Heart To Heart in Saturday's GI Shadwell Turf Mile, a “Win and You're In” event for the GI Breeders Cup Mile Nov. 4.

Away neatly from gate three with stable first-call rider Danny Tudhope opting to ride him over the more accomplished Mondialiste (Ire) (Galileo {Ire}), Suedois settled in mid-division early on as Heart To Heart, beaten by American Patriot (War Front) in the waning strides of this track's GI Maker's 46 Mile in this spring, galloped them along through a half-mile in :48.17, at times looking as if he wanted to overrace. The favorite still traveled well around the far turn, and was the first to face the judge, but they were beginning to come after him. Defending champ Miss Temple City (Temple City) was the first to try, but peaked on her run, while Ballagh Rocks was also in with a fighting chance if good enough. Heart To Heart was clinging desperately to the lead deep inside the final furlong, but Suedois, who was pulled off the heels of Ballagh Rocks in upper stretch, quickened best of all for the victory.

“I thought I had a nice position [toward the rear of the pack],” said Tudhope, who guided Mondialiste to his runner-up effort behind Tepin (Bernstein) in the 2015 Breeders' Cup Mile at Keeneland. “He travels really well, and I didn't want to get [to the front] too soon. He finished really strong. He handled the track really well. I was happy with the way it went.”

Three times placed at Group 1 level in some of Europe's top sprint races last year, including the G1 Prix de la Foret, Suedois failed to find the winner's circle in his first five runs this term, but righted that wrong with a half-length victory under 134 pounds in the G3 Boomerang S. at Leopardstown on Irish Champion weekend Sept. 9. Trainer David O'Meara opted for the Shadwell over a return trip to France for the Foret last weekend and the decision paid dividends Saturday.

Suedois is the third top-level winner for his promising young sire, who accounted for G1 Prix de Diane winners Avenir Certain (Fr) and La Cressioniere (Fr) from his first few crops. The sire's daughter Rymska (Fr) was victorious in last weekend's GIII Commonwealth Oaks at Laurel Park, while his son Auvray (Fr), like Suedois a graduate of the Arqana Arc Sale, was recently a Group 3 winner in Australia.