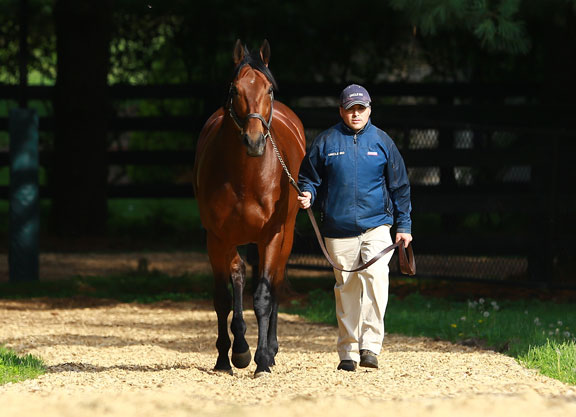 Keeneland’s five-day January Horses of All Ages Sale begins on Monday, and the catalogue includes plenty of pedigrees to pique the interest of European shoppers. We ran through the catalogue and picked out a selection to highlight from Book 1 of the sale on Monday and Tuesday.

Just the second short yearling to go through the ring on Monday is a daughter of Kitten’s Joy (hip 4) who is a half-sister to Protectionist (Ger) (Monsun {Ger}), winner of the G1 Melbourne Cup and G1 Grosser Preis von Berlin. They are out of Patineuse (Ire) (Peintre Celebre), who is herself out of the French listed-winning Parisienne (Ire) (Distant Relative {Ire}). Kitten’s Joy is of course the sire of the 2018 Cartier Horse of the Year Roaring Lion, and he has an exciting 3-year-old to represent him in Britain this year in the form of the G1 Vertem Futurity Trophy winner Kameko.

Sastrugi (hip 31) is a 6-year-old unraced daughter of Bodemeister who is offered in foal to Hard Spun carrying her third foal. Under the first dam her pedigree appears thoroughly America, she being a half-sister to GI Carter H. winner Morning Line (Tiznow). Her second dam November Snow (Storm Cat), however, produced Arctic Drift, who in turn produced Believe’N’Succeed (Aus) (Exceed and Excel {Aus}), the dam of last year’s G1 Investec Derby winner Anthony Van Dyck (Ire) (Galileo {Ire}). Sastrugi was last offered at Fasig-Tipton November in 2017, again in foal to Hard Spun, when she was bought back for $200,000. Her Tiznow filly foal made $60,000 at Keeneland last November.

Tapitai (Tapit) (hip 83), a placed granddaughter of the G1 Fillies’ Mile second and excellent producer Maryinsky (Ire) (Sadler’s Wells), is offered by Denali Stud. Maryinsky has left the Classic-winning Peeping Fawn (Danehill) and the Group 1-winning juvenile Thewayyouare (Kingmambo) and is the second dam of the Listed Chesham S. winner and mulitple Group 1-placed September (Ire) (Deep Impact {Jpn}). Maryinsky is a half-sister to American Broodmare of the Year Better Than Honour (Deputy Minister). Tapitai is out of the Dansili (GB) mare Reaching (Ire), who was a $675,000 Keeneland November purchase in 2013 in foal to Frankel (GB). Tapitai is in foal to English Channel carrying her first foal.

Denali also offers the 9-year-old Songoficeandfire (Dynaformer) (hip 54), who is out of the G1 Yorkshire Oaks winner Catchascatchcan (GB) (Pursuit of Love) and a half-sister to G2 Railway S. winner Antonius Pius (Danzig). Songoficeandfire was herself twice graded stakes placed and she is in foal to Kitten’s Joy’s four-time Grade I-winning son Oscar Performance carrying her third foal.

Nova Sol (Ger) (Solider Hollow {GB}) is offered by Elite as hip 388. The 4-year-old was third in the G3 Prix des Reservoirs at two and after joining trainer Chad Brown she picked up placings in her only two starts this year including Belmont’s Listed Wild Applause S. Nova Sol’s second dam is the German Group 3 winner Narooma (Ger) (Silver Hawk), who has produced the listed-winning and German Classic-placed Nymeria (Ger) (Soldier Hollow {GB}) and two other stakes winners.

Recently crowned American champion first-season sire American Pharoah has eight short yearlings catalogued including lot 402, a filly from the estate of highly respected Canadian breeder Bill Graham, who died last January. She is the first foal out of Pavini (Fr) (Dubawi {Ire}), herself a daughter of the G2 Prix de Pomone victress Peinture Rare (Ire) (Sadler’s Wells), a half-sister to G1 Prix de l’Arc de Triomphe and G1 Grand Prix de Paris winner Peintre Celebre (Nureyev). Peter Brant bought Pavini as a yearling for €600,000 from the Wildenstein dispersal at Goffs Orby in 2016, and Graham bought her for $200,000 at Keeneland November in 2018. She was purchased by fellow Canadian Sean Fitzhenry for $225,000 at November last year again in foal to American Pharoah.

Taylor Made offers a yearling filly (hip 201) by its recently expatriated GI Kentucky Derby and G1 Dubai World Cup winner California Chrome who is out of the stakes-winning Dame Ellen (Elusive Quality), a daughter of the G1 1000 Guineas winner Sleepytime (Ire) (Royal Academy).

It shouldn’t come as a great surprise that Glen Hill Farm would offer something with transatlantic appeal considering the global mindset of its program, and while the 4-year-old Confidently (War Front)’s family is an American one, Europeans will note that she is a half-sister not only to Uncle Mo, but she is a full-sister to Could It Be Love, who was bought by the Coolmore partners as a yearling and finished second in the G1 Irish 1000 Guineas. Confidently is offered as a broodmare prospect as hip 595. She is joined in the Glen Hill draft by another daughter of War Front in the unraced Hassler (Ire) (War Front), a daughter of the multiple Grade I-winning Turbulent Descent (Congrats). Turbulent Descent was bought by the Coolmore partners during her racing career and has produced for them the G3 Ballyroan S. winner Spanish Steps (Ire) (Galileo {Ire}). Hassler is offered in foal to Medaglia d’Oro’s son Violence.

Makeme Dream (Quality Road) (hip 749) is a 4-year-old filly offered by James Keogh’s Grovendale as a racing or broodmare prospect. She raced as a homebred for Moyglare Stud, winning two of her five starts for trainer Christophe Clement. Makemedream is out of a winning Galileo daughter of Moyglare’s dual Group 3 winner and Group 1-placed Dress To Thrill (Ire) (Danehill), who is in turn out of the G1 Irish 1000 Guineas winner Trusted Partner (Affirmed) and from the family of Group 1 winner and promising young sire Free Eagle (Ire) (High Chaparral {Ire}).