Ete Indien 'Very Good' After FOY; Maxfield Steps It Up With Bullet Half 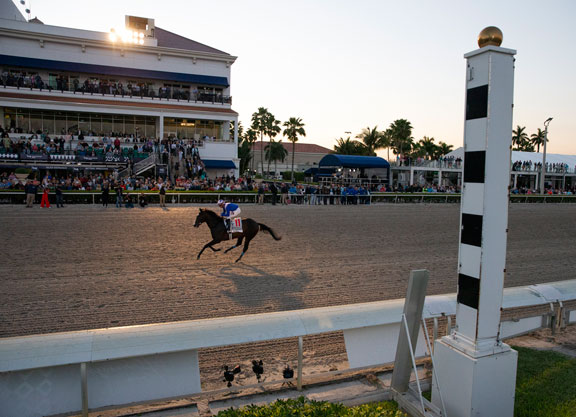 Ete Indien (Summer Front), who produced a breakout performance when dominating Saturday's GII Fasig-Tipton Fountain of Youth S. by 8 1/2 lengths at Gulfstream, came out of his effort well Sunday morning, according to trainer Patrick Biancone.

“Very good,” Biancone told the Gulfstream notes team of how his colt looked. “He ate all his dinner and he's happy and sound this morning, which is what you want to see. We're good.”

Starting his career on turf, Ete Indien switched to the dirt for an upset allowance victory Dec. 20 in Hallandale and proved that was no fluke when finishing a good second to leading GI Kentucky Derby contender Tiz the Law (Constitution) in the GIII Holy Bull S. Feb. 1. Saturday, the dark bay was sent to the lead from his outside draw and never looked a loser, blowing away nine rivals while earning a career-best 97 Beyer.

“I'm going to be honest with you, he's impressing me every day when he trains since I've had him,” Biancone said. “Yesterday, he had a difficult task. We got a bad draw but everything did go well. At this age, it's just a question of improvement. Hopefully he keeps improving and developing the right way. That would be good.”

Ete Indien is expected to stay at Gulfstream and use the Mar. 28 GI Florida Derby as his final Kentucky Derby prep.

Elsewhere at in South Florida Sunday, Godolphin's undefeated Grade I winner Maxfield (Street Sense) recorded his third work back since missing several months due to injury as he moves closer to his 3-year-old debut. The homebred turned up the intensity significantly from his previous two breezes–a three-furlong work in :38.20 (13/16) Feb. 17 and half-mile in :51.20 (25/28) Feb. 24–with a best-of-41 four-furlong spin in :48.45 at trainer Brendan Walsh's Palm Meadows base.

“He worked really well,” Walsh said. “He's starting to step up a little bit now. The next work or two we'll have a good idea of where we're going to go with him, but he's doing good. We have to see with him because it'll be a question of, do we take a shot at one of the Derby [preps] if he's doing real good or just try to find something a little softer for him off the layoff? That's just the way it is. We're still not quite decided on it and it's going to be him that makes the decision for us, really. But, I wouldn't rule anything in or out.”

Walsh added that he doesn't think there's enough time for his charge, a blowout winner of the GI Claiborne Breeders' Futurity when last seen Oct. 5 at Keeneland, to make the Florida Derby, and didn't rule out skipping the Kentucky Derby for a run in the GI Preakness S. May 16.

“I don't know if we'd throw him to the wolves off the layoff in something like the Florida Derby. That's probably unlikely, but I'm saying that like there's any really softer spots,” Walsh said. “When you get that close to the [Kentucky] Derby, everybody's trying to go at it so no matter where you go you're going to come up against some good ones. We're kind of watching what's going on with everybody else, too. The other thing would be to come back maybe somewhere around Keeneland and run him in the Preakness. That might be the other option. It doesn't matter where he comes back, he's going to be a good horse this year. It's just a question about what the timing allows us to do. We'd all love to win the Derby, but on the same point I'm not going to sacrifice a horse like him just for it.”