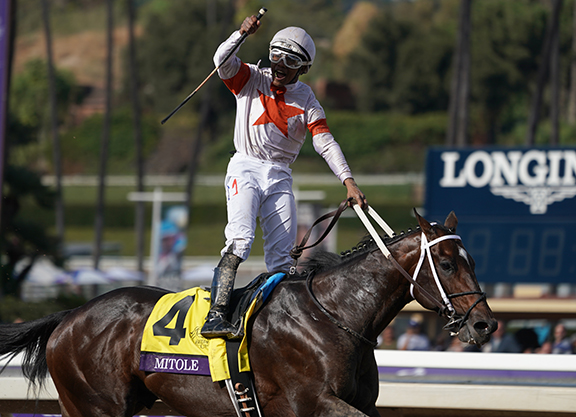 ARCADIA, CA – William and Corinne Heiligbrodt's Mitole (Eskendereya) put an exclamation point on a championship season with a thrilling 1 1/4-length decision over Shancelot (Shanghai Bobby) in the GI Breeders' Cup Sprint. Whitmore (Pleasantly Perfect) was along for third.

Mitole, off as the 9-5 second-choice, chased on the outside in fourth beneath Ricardo Santana, Jr. as the speed demon 3-year-old Shancelot threw down the gauntlet, blazing the way through fractions of :21.47 and :44.04. Mitole hit the gas with a three-wide move with a quarter mile remaining, and, after switching to his right lead in the stretch, quickened impressively to reel in the favored pacesetter and win going away.

Mitole's brilliant campaign this season has also included authoritative wins in the GI Churchill Downs S. May 4, GI Runhappy Metropolitan H. June 8 and GI Forego S. Aug. 24. His lone loss from seven trips to the post in 2019 came when a well-beaten third over a notoriously dead rail after drawing the fence in the GI Alfred G. Vanderbilt H. at Saratoga in late July.

Mitole is slated to begin his career at stud at Spendthrift Farm for the 2020 breeding season.

“I think that he is so easy to be around, nothing but class and the ability he has is just tremendous,” Hall of Fame trainer and seven-time Breeders' Cup-winning trainer Steve Asmussen said. “Bill and Corinne being in racing as long as they have, it's a difficult position to be in, especially with a horse that had done so much earlier in the year with the Met Mile being such an important and marquee race for this horse going forward. And for him to regroup from there and then to prove that he's the fastest horse in the world today, just what an unbelievable horse that he is.”

“Well, I have to just say amen to what Steve said,” Bill Heiligbrodt said. “But I do want to say one thing: I know this horse. I know horses. My wife knows horses. We buy our horses. We sweated getting this horse, but I'm going to tell you here today nobody would have or could have trained this horse other than Steven Asmussen. To have a horse this fast, it's like an athlete. Like if you played football, and you have to play every week, when you get to the last game, it's really, really difficult. And of all these fast horses Corinne and I have had, it's very difficult to keep them at that level of performance.”

Runner-up Shancelot posted one of the most impressive performances of the season this summer, running away with Saratoga's GII Amsterdam S. by 12 1/2 lengths with an eye-popping 121 Beyer Speed Figure. He ran a heartbreaking second to Omaha Beach (War Front) in the GI Santa Anita Sprint Championship S. last time.

“Look at the horse who beat us,” trainer Jorge Navarro said.

“He's the top sprinter in the nation, probably the world. I'm very proud of him. I feel like a winner. He's had an amazing year for us and he'll be by himself next year, so we're happy about that. This race was a big one for him. We're going to do what's best for the horse and there's next year for him.”

Mitole, a $140,000 OBSAPR juvenile purchase by these connections following a :10 breeze, is one of two Grade I winners for his sire along with Mor Spirit. The late Edward Cox, Jr., bred and raced Mitole's dam Indian Miss, who never found the winner's circle. The bay colt is her second foal and she has since produced the unraced 3-year-old Tipperary Jack (Violence), a juvenile filly by Creative Cause and a yearling filly by Oxbow, who brought $110,000 from Dennis O'Neill at last month's FTKOCT Sale. WinStar purchased the half-sister to GSW Live Lively (Medaglia d'Oro) for $240,000 carrying a foal by Into Mischief at the 2018 Keeneland November Sale as part of the Cox dispersal. Indian Miss foaled a filly by Into Mischief May 26. For more, see Mitole: A Memento to Ed Cox.