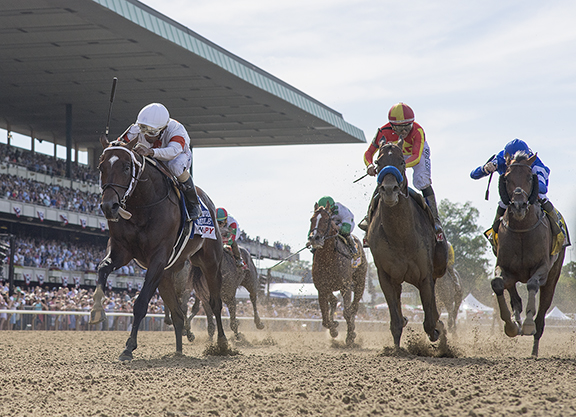 The brilliantly talented Mitole (Eskendereya) still had some questions to answer while seeking his seventh-straight victory but first at a mile in the GI Runhappy Metropolitan H. at Belmont Saturday. After pressing a fast pace, he fended off two world-class rivals to score and provide trainer Steve Asmussen and rider Ricardo Santana, Jr. with back-to-back renewals of the prestigious event. Race favorite McKinzie (Street Sense) ran on late to cut the margin of victory to 3/4 of a length after enduring significant traffic trouble that might've cost him the race, and two-time G1 Dubai World Cup hero Thunder Snow (Ire) (Helmet {Aus}) gave a good account of himself to be third. “This is really a special horse,” Santana said. “I can't explain how happy I am with this horse. He can come [from the] back, he can go in front, you can put him between horses and he always keeps trying his best. Today, we delayed as long as we can. He's a really amazing horse.”

With G2 Godolphin Mile hero Coal Front (Stay Thirsty) somewhat surprisingly ridden to the lead from his rail draw, Mitole employed his ample early zip to latch on to that foe's flank through an opening quarter of :22.17. He poked a nose in front in the vicinity of a :44.38 half, but still had Coal Front fighting on inside of him and the usually in front Promises Fulfilled (Shackleford) being scrubbed on three deep. Thunder Snow, meanwhile, looked loaded as he waited for a seam from the pocket, and McKinzie was revving up for his run further out. Mitole shook off his pace foes leaving the quarter pole, but by midstretch Thunder Snow had gotten out from underneath Promises Fulfilled and McKinzie had finally found a clear path inside after getting completely bottled up behind the eventual third finisher. Mitole and Santana had left the fence open, but it didn't matter as neither pursuer had quite enough kick or enough time to run him down.

“We had a little traffic trouble and if he could have gone right [outside] instead of left, that would have been the way to go,” said Jimmy Barnes, assistant to McKinzie's trainer Bob Baffert. “It's up to Mike [Smith] to make the right decisions. The horse showed up and he ran well. Credit to Steve Asmussen. His horse ran lights out, and ours did too.”

Hall of Famer Smith added, “It was a very unlucky trip. Very unlucky.”

Mitole broke through by an emphatic 10 lengths at third asking last February at Oaklawn, but settled for second as a heavy favorite after finding some trouble in the sloppy-track Gazebo S. three weeks later. Since then he's done nothing but take trips to the winner's circle. After bouncing back with a seven-length optional claiming event in Hot Springs in March, he was equally dominant in that venue's Bachelor S. in April and in the Chick Lang S. on a wet GI Preakness S. undercard in May. Given time after that due to a splint bone injury, he picked up right where he left off at Oaklawn Mar. 2, and made the grade in the GIII Count Fleet Sprint H. in Arkansas Mar. 2 before pressing and pulling away to a 3 1/2-length tally in the seven-panel GI Churchill Downs S. on GI Kentucky Derby day. That was his only prior effort at anything but a six-furlong trip.

“This win with this horse is so special,” said Asmussen, who saddled Bee Jersey (Jersey Town) to victory here 12 months ago. “I'm thrilled for the Heiligbrodts, who have so much to do with the success that we have. Winning back-to-back editions of the Met Mile, I can't even put into words what this means. Today is what we had targeted. We know what this race meant; what a tremendous field it had. For him to come out on top against this field today under the pressure that he had, he proved what we believed in him the whole time. We're just so fortunate to be associated with this horse.”

He added, “I believe this race is the showcase we want it to be. You know how I felt about the horse last year and then with that little splint issue he got off track. For the Heiligbrodts to wait it out, and to now be in this position, standing here with him where we are today, is very gratifying.”

The Heiligbrodts, who took a hiatus from racing and dispersed their stock in 2011, have returned with a vengeance. They also co-campaign the likes of last month's GI Humana Distaff S. heroine Mia Mischief (Into Mischief).

With his victory Saturday, Mitole earned an automatic spot in the starting gate for the GI Breeders' Cup Dirt Mile, but future plans were still in the air after Saturday's score.

“We weren't looking past today,” Asmussen said. “Today was our target and for this horse to put it all together that way that he has so far this year is what we will enjoy. We will enjoy this victory and go back to Churchill for a couple of weeks and then regroup, and then go on from there.”

Mitole is one of two Grade I winners for his sire along with Mor Spirit, who dropped jaws when he took this race by 6 1/4 lengths in 2017. The late Edward Cox, Jr., bred and raced Mitole's dam Indian Miss, who never found the winner's circle. The bay colt is her second foal and she has since produced the unraced 3-year-old Tipperary Jack (Violence), a juvenile filly by Creative Cause and a yearling filly by Oxbow. WinStar purchased the half-sister to GSW Live Lively (Medaglia d'Oro) for $240,000 carrying a foal by Into Mischief at the 2018 Keeneland November Sale as part of the Cox dispersal. Indian Miss foaled a filly May 26. For more, see Mitole: A Memento to Ed Cox.