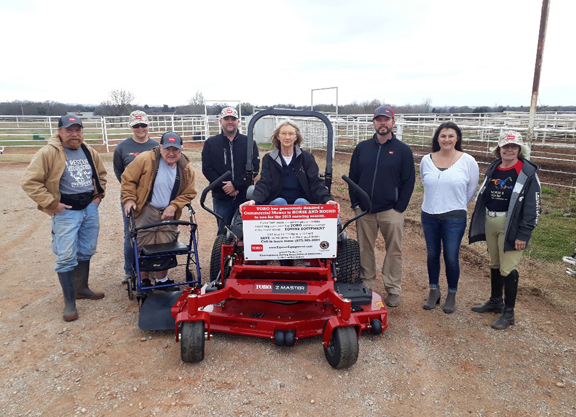 Equine Equipment concluded its inaugural “For the Good” program for 2019 with almost a dozen aftercare programs being helped by a donation of a Toro or Exmark commercial mower for the summer mowing season. The initiative was launched as a way to give back and show support for the horse industry and the equine athletes after they leave the track.

Among the programs that were previously announced as recipients of mower donations were the Horse and Hound Rescue Foundation in Oklahoma, ReRun in New York (in memory of Rick Violette Jr.), After the Races in Maryland, War Horses at Rose Bower in Virginia, New Vocations at Mereworth Farm in Kentucky and Step Ahead Thoroughbred Retirement in Florida (in memory of Kent Stirling). In addition to those donations of a mower to be used in 2019, a Toro mower was donated to the Maryland Jockey Club and was raffled off prior to the GI Preakness S. with proceeds benefiting the Thoroughbred Aftercare Alliance. New Vocations at Ridgewood Stables, MidAtlantic Horse Rescue Inc., LongRun Thoroughbred Retirement Society and the Standardbred Transition Alliance were also recipients of a Toro or Exmark mower.