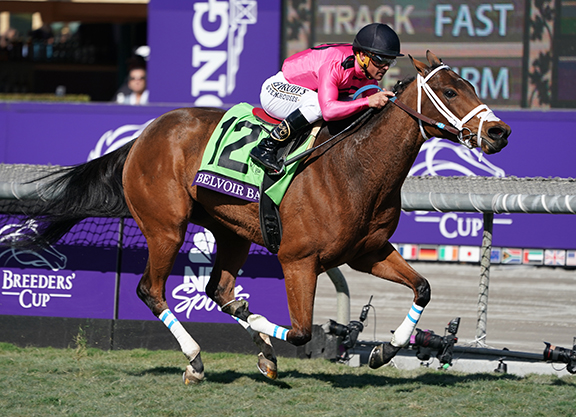 Coming over from Europe in the fall of 2015, the bay didn't take long to make an impact, romping by 7 1/4 lengths in the local Blue Norther S., the first of nine stakes wins since resettling in America. Starting this 6-year-old season with victories in the Las Cienagas S. on dirt and Wishing Well S. over grass here, she was a dynamite second to superstar Blue Point (Ire) (Sharmadal) in the G1 Al Quoz Sprint Mar. 30 in Dubai before returning home to run second in the GIII Monrovia S. and fourth in the GI Jaipur Invitational S. when last seen June 8 at Belmont.

Overlooked a bit at 14-1 in this first Breeders' Cup try, Belvoir Bay broke sharply from her outermost draw and was aggressively handled by Javier Castellano to be a somewhat surprising early leader after expected pace player Pure Sensation (Zensational) missed the break and was steadied early. Dictating terms through a reasonable :21.47 quarter, she inched clear on the latter half of the turn while moving strongly as her closest pursuers started to come under pressure. Straightening for home in total control, Belvoir Bay remained clear past the furlong grounds and held sway for a 1 1/4-length success, stopping the timer in a sizzling :54.83. Om (Munnings) won a head-bob with Shekky Shebaz (Cape Blanco {Ire}) to complete the Miller exacta, while Stubbins (Morning Line), the only horse to make up significant ground in the stretch, edged an unlucky Pure Sensation for fourth. Stormy Liberal (Stormy Atlantic), seeking his third straight Turf Sprint crown, showed speed before fading to finish eighth.

“Watching it unfold, I was watching all three of [my horses] at the start because I had the two in the 11 and 12 post and the six in the middle, and they all broke great. When I saw them all break great, I was like, 'Whoa, that's the first release,'” said Miller. “And then it looked like the other speed, Pure Sensation, didn't get away from there good. When we made the lead like that, I didn't look at the fractions because I know this filly, she's tough as nails. She's 900 pounds soaking wet, and it's all heart. She's unbelievable.”

“This horse just rocketed out of the gate, and the break is so important in these races,” said Castellano. “She relaxed for me around the turn and it gave me confidence that we were going to win. Peter told me the horse was training great and he had confidence in me. I'm very lucky and happy to be part of this horse.”

“Peter did an amazing job getting her ready after five months' layoff. But that's his specialty. He told me, 'We'll get her ready,” added winning owner Gary Barber. “And he was amazing. Javier Castellano rode a brilliant race. The 12 hole, I was worried about being very wide. He got over, got to the fence. Once she got to the fence on the lead, she's done that three times before, and I knew that [at] five furlongs, it would be tough to catch her. It was a tremendous feeling for my whole family, my children, my mother, my sisters and my brothers, everybody. So I'm thrilled and couldn't be happier.”

Belvoir Bay's victory held additional significance for her connections because she was one of the horses affected by the devastating San Luis Rey fire two years ago.

“Peter was literally driving down the freeway telling me, 'There's a major fire. I'm running straight there.' He didn't care about anything but the horses,” said Barber. “And I must have spoken to him about 20 times that day. Unfortunately we couldn't find five or six of our horses. Belvoir was one of them, and we didn't find her until a couple days in. Fortunately she was safe and someone had her, but she was all mixed up. She went to the clinic for two, three weeks. We gave her hyperbaric treatment and really nursed her back. Pete did a masterful job.”

“It was harrowing, we couldn't find her,” said Miller. “She was injured and had some burns and needed to be at the clinic for three weeks. And so [that's] part of the emotion with her. She's just special.”

Belvoir Bay, who hammered for $625,000 last year at Fasig-Tipton November and is back in the same sale next week as Hip 96, is one of 17 stakes winners and 11 graded/group stakes winners for Equiano (Fr), who won renewals of the G1 King's Stand S. in 2008 and 2010 before retiring to Newsells Park Stud in England in 2011 and subsequently being relocated to Australia. With the Turf Sprint victory, she becomes his second top-level winner, following three-time G1SW The Tin Man (GB). She's the first black-type horse for dam Path of Peace (GB), a half-sister to GSW Please Sing (GB) (Royal Applause {GB}). Second dam Persian Song (GB) is a full-sister to French champion and 1986 GI Kentucky Derby runner-up Bold Arrangement (GB), while third dam Arrangement (GB) is a half to English champion Lindsay (GB) (Dante {GB}).