Enticed: A Special Addition to the Darley Stallion Roster 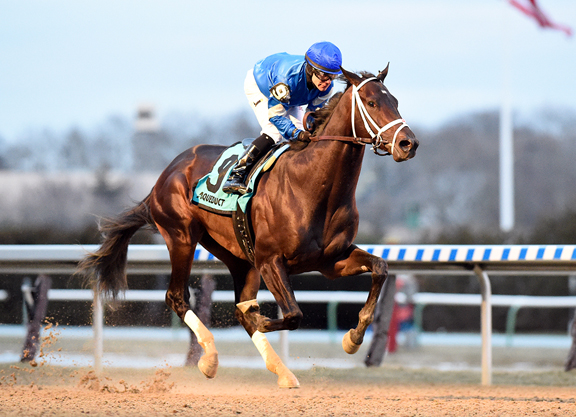 Medaglia d'Oro is the definitive flag-bearer at Darley's Jonabell Farm as their top-priced headliner since 2014. The Darley elite sire has 25 Grade/Group I winners to his credit. This year, Darley welcomes a special new addition to the stallion barn. Dual graded stakes winner Enticed is the first son of Medaglia d'Oro bred and raced by Godolphin to stand at Darley.

Darley Sales Manager Darren Fox explained why Enticed is unique for the Godolphin organization. “Enticed is our first homebred son of Medaglia d'Oro to make it to our stallion barn. He was a top-class dirt horse at two and three, and being out of our Godolphin-raced millionaire It's Tricky just makes him that little bit extra special for us.”

It's Tricky (Mineshaft) was part of the final crop of Stonerside-bred foals and was raced by Godolphin. At three, she won the GI Acorn S. and the GI Coaching Club American Oaks. She also placed second to Eclipse Champion Royal Delta (Empire Maker) in the GI Breeders' Cup Ladies' Classic. At four, It's Tricky took the GI Ogden Phipps H. and retired with earnings of over $1.6 million.

“Kiaran McLaughlin called her one of the most talented fillies he's ever trained,” said Fox, “and that's saying something. This filly was immensely talented and is one that was very near and dear to our hearts.”

Enticed was foaled in 2015 from Medaglia d'Oro's 10th crop. Fox said that Enticed has the same commercial look as his sire. “He's quite a striking physical as a big, framey, commercial type in the same mold as his father. He's 16.3, with an amazing shoulder and hip, and a good length of body. We feel that this physical represents excellent value for breeders at $10,000.”

As a juvenile, Enticed broke his maiden on debut at Saratoga before placing third in the GI Champagne S. to Firenze Fire (Poseidon's Warrior) with Eclipse Champion Good Magic (Curlin) in second. He then went on to win the GII Kentucky Jockey Club S. Fox said this race in particular showed the great heart of the colt.

“He was bumped into the first turn, had to go eight-wide turning for home, and then got into an epic battle with Tiz Mischief (Into Mischief) coming into the stretch and prevailed by a head. It was just a thrilling performance.”

The colt showed the same fight as a 3-year-old as he claimed the GIII Gotham S. at a mile. After going five-wide on the backside, he opened up in the stretch to win by almost three lengths, defeating GI winners Firenze Fire and Free Drop Billy (Union Rags).

“The Gotham was one of his most visually impressive performances, and a big resume booster with the level of tough competition in the race,” said Fox.

Although Enticed has only been available for breeder inspection for a little over a month, Fox said his book is well on its way to being completely filled. “He's such a commercial-type horse that if he replicates himself, breeders will be duly rewarded at the sales. I think that's the first thing that strikes breeders when they see him. They think, 'If I get one to look like this, I'll be in good shape.'”

Fox said he finds Enticed to be set apart from the rest of the incoming class of freshman sires in that he is out of such a successful race mare. “Very few stallions are out of such a phenomenal race mare such as It's Tricky, and that gives him an extra edge that many stallion prospects don't have.”

Enticed is the only stallion beginning stud duties in Kentucky next year out of a mare with over $1 million in earnings. Along with WinStar's Yoshida (Jpn) (Heart's Cry {Jpn}), Enticed is one of just two incoming sires in Kentucky with a Grade I-winning dam.

“What's really special about Enticed is the fact that he's so well-rounded and gets high marks in many different categories. He's by Medaglia d'Oro, which is obviously quite appealing, but he's also out of an incredible race mare,” Fox said. “He was a precocious graded stakes winner at two, and then followed up with another graded stakes win at three. When you package all that up and present it to breeders for $10,000, it's easy to see why he's so popular with breeders. We're very excited about the future for Enticed here at Darley.”